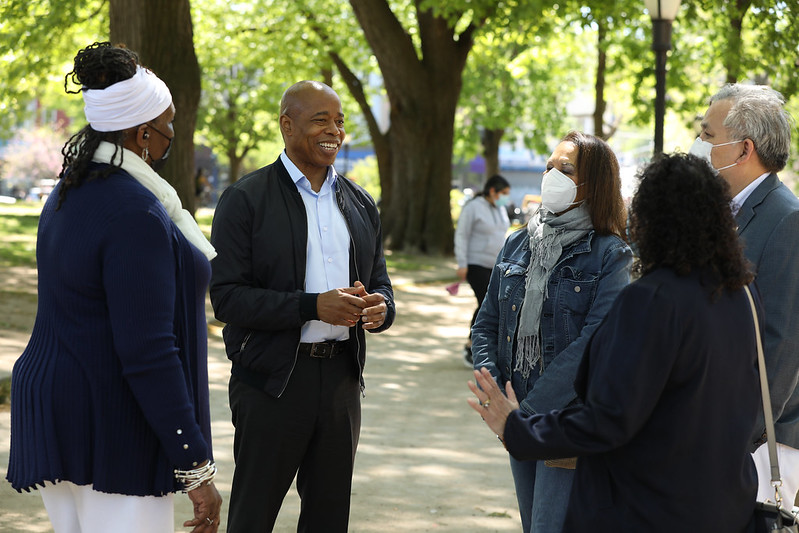 Mayor-elect Eric Adams’ victory came with a hefty price tag. Over the course of the campaign, he raised just over $19.1 million, more than half of which was in public matching funds, and spent about $18.1 million, according to the latest financial disclosures. He also benefited from nearly $8.2 million in independent expenditures in his favor, with little outside spending to oppose him.

Adams was all but assured to win after emerging as the Democratic mayoral nominee from a crowded field of candidates. Through the June 22 primary election, he had already spent about $10.7 million. And while facing weak opposition in the general from Republican nominee Curtis Sliwa and several others, Adams spent another $7.2 million to cement his victory.

As a sitting elected official with a deep base of support, Adams enjoyed a fundraising advantage throughout the campaign. He raised more than $9 million in private contributions and received $10.1 million in public matching funds through the city’s campaign finance program, which matches the first $250 of qualifying contributions from city residents at an 8-to-1 ratio. He raised more than $5.6 million from within the city and just under $3 million from outside the five boroughs. He had a total of 15,466 contributors for an average contribution of $560.

Sliwa, by comparison, raised a total of $5.8 million, including $4.2 million in public funds, and spent more than $6 million, leaving his campaign about $203,000 in debt as of the most recent filing.

Adams only spent about $225,000 on fundraising efforts directly, according to the filing. The latest filing was due Tuesday and covered the filing period from October 19 to November 25, showing Adams’ spending in the last frantic weeks of the campaign and the period just after it. He still had more than $1 million left in his campaign account, and has about $142,000 in outstanding liabilities. The final filing of the 2021 campaign is due on January 18.

Adams’ fundraising and spending surpasses Mayor Bill de Blasio’s campaign finances for his two successful elections, though that is in part due to the expansion of the public matching funds program. When de Blasio first won in 2013, he raised about $14.6 million, including just about $4 million in public funds, and spent $13.5 million. In 2017, sailing to reelection, the mayor raised $10 million, including $3.5 million in public funds, and spent $10.1 million, leaving his campaign marginally in debt at the time.

Campaign literature and mailers accounted for the second largest expense, at about $2.84 million. Almost the entire amount, about $2.76 million, went to Red Horse Strategies, Adams’ main consultant, which then created, purchased, and sent out materials itself or through other vendors. The firm also received about $125,000 from monthly retainer payments, which were likely in some significant part for the work of Nathan Smith, the firm’s embedded representative on the campaign and credited as its architect by Adams.

Adams’ campaign paid more than $1.67 million to consultants in total, including the payments to Red Horse. That included $275,000 to Tulchin Research, an opinion polling firm. Evan Thies, Adams’ senior advisor for communications, chief campaign spokesperson, and co-head of Pythia Public, was paid a total of $165,000 for his role. Menashe Shapiro, founder of Shapiro Consulting Group, and a strategic communications consultant and rapid response advisor on the campaign, was paid $92,000 by the campaign.

The campaign paid creative digital firm Do Big Things $200,000 and Fried CO Media another  $100,000. It paid the law firm of Pitta LLP a total of $180,000 for consulting and professional services. The firm’s leaders also run a lobbying business, Pitta Bishop Del Giorno LLC, which has lobbied Adams in the past. Tiffany Raspberry Consulting received $94,000 and My Brnd Inc was paid $77,000.

Some of the campaign's payments to consultants have come under question. The New York Post first reported that the campaign paid $81,000 to Edu Hermelyn, husband of Assemblymember Rodneyse Bichotte, who chairs the Brooklyn Democratic Party and endorsed Adams in the primary. Edu Hermelyn had a limited role on the campaign and little expertise in consulting work, according to the Post’s reporting, raising questions about whether the payments were based on patronage rather than experience.

Barely $107,000 was spent on professional services, largely for attorneys fees. But notably, about $48,000 of that went to the firm Abrams Fensterman, where Frank Carone, a top Adams ally, is a partner. Carone offered Adams office space, at least in the early days of his campaign and legal advice throughout. He and his wife hosted fundraisers for the mayor-elect and each donated the maximum amount to his campaign. According to Politico New York, Carone, who is also the longtime counsel to the Brooklyn Democratic Party, is under consideration to become Adams’ chief of staff.

Adams’ campaign spent more than $870,000 on campaign worker salaries. Campaign manager Katie Moore, political director of the Hotel Trades Council before joining the campaign, was paid more than $144,000 for her work. Deputy campaign manager Pragya Nandini was paid about $95,000. Top campaign aide Ingrid Lewis-Martin, who is also the Deputy Brooklyn Borough President under Adams, was paid more than $81,000. As reported by The City, she did not take a leave of absence and was also being paid for her official duties at the time, with an annual salary of $172,900.

Independent spenders put $8.18 million behind Adams’ campaign. Most of that financial support came from Strong Leadership NYC Inc, in about $6.3 million in spending. The PAC was created by Jenny Sedlis, executive director of StudentsFirstNYC, a pro-charter school and education reform advocacy group. The PAC’s top donors were hedge fund managers Steve Cohen, Daniel Loeb, and Kenneth Griffin. Hotel Workers for Stronger Communities, a PAC backed by the Hotel Trades Council, which endorsed Adams fairly early in the primary, spent more than $1 million to support him.

Those independent expenditures were largely made during the primary, helping boost Adams to a narrow victory. By the time the primary concluded, outside groups had spent about $7.7 million to support him, far eclipsing the combined outside spending for his two main opponents, former counsel to the mayor Maya Wiley and former sanitation commissioner Kathryn Garcia. Wiley received more than $2.2 million in independent support while Garcia only got about $200,000. In sum during the primary, the money spent in support of Adams — both by his campaign and outside entities — was more than the combined spending for Garcia and Wiley.