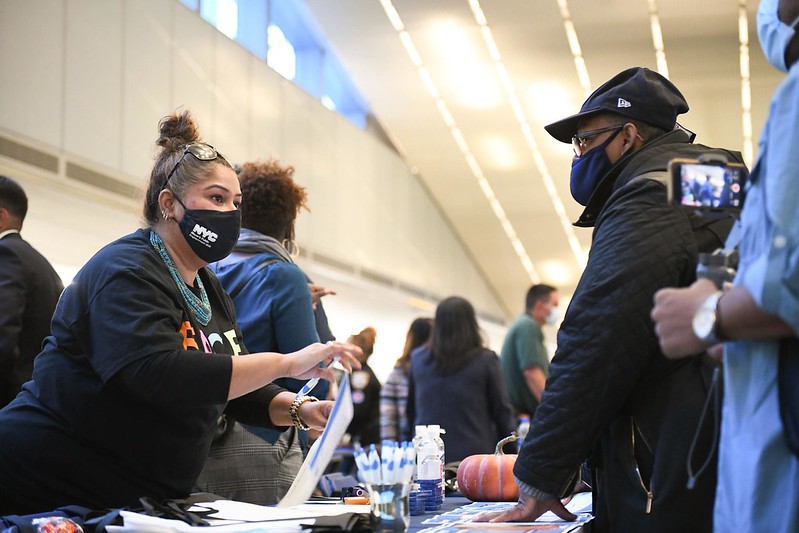 As the economic recovery from the covid pandemic continues to change the job market, experts are looking across the Hudson at a new model to get New York City's workforce ready for the leading sectors of the future.

In June, New Jersey launched Pay It Forward, a bond initiative to fund workforce training programs for good-paying jobs in growing industries as part of an effort to address the lack of short-term education options for low-income residents. Economists and skills-training providers are urging Mayor-elect Eric Adams and the incoming City Council set to take office in January to explore a similar model in New York to raise badly-needed revenue, fill growing skills gaps, and create a more cohesive workforce development landscape.

A new report from Center for an Urban Future (CUF), explores how a bond program in New York City, if done carefully, can help bring successful training programs to scale and shift incentives to encourage workforce development in higher-wage jobs with better long-term opportunities.

The report, "Financing Economic Mobility: Adopting New Jersey’s Pay It Forward Model," is being released Monday, December 20, as the debut publication of CUF's new Economic Opportunity Lab series, which will examine innovative and inclusive economic policies from outside New York that can be replicated in the city. New York City's unemployment rate is still more than double what it was in March 2020, before the economic shutdown, and there is growing attention on economic recovery and workforce development as the next city government takes office.

"The city's incoming leaders will need to ensure that thousands more New Yorkers have access to high-quality job training programs that lead to well-paying careers," said Eli Dvorkin, CUF's editorial and policy director, in an email. "But today few of these programs are able to scale up to meet this demand, in large part due to limited public funding and narrow restrictions on how those dollars are spent."

The pandemic has churned New York City's economy, eliminating once steady jobs and accelerating preexisting labor market trends, like the growth of tech and automation. With the economic shutdown and subsequent rise of remote work, jobs in tech, healthcare, and advertising have boomed alongside a disproportionate decline in lower-wage jobs. The city's tourism industry, which before the pandemic employed more than a quarter-million New Yorkers, lost 89,000 jobs, a third of its workforce, in 2020 and continues to lag.

According to CUF's research, close to a fifth of all new job listings in the city since the pandemic began have been in technology, a sector whose most common job titles had already grown 71% in the decade before the pandemic. Advertising and healthcare jobs, which were already growing steadily when the pandemic hit, have met and exceeded, respectively, their pre-pandemic levels.

At the same time employment in retail is 11% below pre-pandemic levels and 27% below in the restaurant industry, sectors that employed large numbers of low-wage workers where jobs had once been accessible to people with little or no training.

New York City has only a patchwork of short-term workforce training options that would meet the needs of many of the job-seekers left under- or un-employed by the pandemic – including older, mid-career residents for whom a full-time college or technical degree program is not an option. Many of the ones that do exist are prohibitively expensive for the thousands of lower-income job-seekers striving to enter higher-paying and more technical fields. Nonprofit providers and ones geared toward poorer communities are few and far between, according to the CUF report, most serving only a few hundred prospective employees a year, owing, in part, to a lack of public funding.

When it launched, New Jersey Governor Phil Murphy said the bonds would create "new opportunities for New Jerseyans who have been shut out of good, family-sustaining jobs in the past.”

Pay It Forward used $5.5 million in tax dollars to match private donations from a consortium of large companies known as the New Jersey CEO Council. Under the program, the career impact bonds they funded initially pay the cost of job training. Eligible residents – people left unemployed by the pandemic or prior, people on public assistance, and formerly incarcerated New Jerseyans – only have to pay the cost of their job training if and when they get a job with good wages in their chosen sector. If they don't get one within five years, they don't have to pay. The bonds also fund related costs, like childcare and transportation.

"New Jersey has been able to attract grants from major companies who are committing to reinvesting the return back in the program," Dvorkin told Gotham Gazette. "Some companies may view this solely as philanthropy, while others see this as a scalable way of helping to train their future workforce."

In December, Mayor-elect Eric Adams met with the heads of 60 companies to establish his own "Corporate Council," giving business leaders a direct voice in his economic recovery planning.

“Getting our city back on track is going to require strong public-private partnerships. I’m humbled by the response from our Corporate Council to lean in, roll up their sleeves, and help accelerate our recovery,” Adams said in a statement. “From partnering on priorities such as workforce development, childcare, and revitalization of our commercial districts, the business community has made it clear they are with me and all New Yorkers every step of the way.”

Adams, currently the Brooklyn Borough President, made workforce development a focus of his campaign platform and now mayoral transition. When he takes office in January, he has promised to undertake a robust analysis of job listings and skill needs at the district level, a sentiment lauded by employment advocates, which he says will help calibrate the workforce with the changing job market. As part of his platform, Adams committed to establishing a city-run jobs database that he said would centralize disparate hiring practices and facilitate job-seeking. He has said he will partner with the city's biggest employers on job placement.

It links "the interests of public and private backers, who want to see measurable results; employers, who need a steady supply of well-trained talent; and workforce trainers and learners, who both stand to benefit from better-aligned programs," reads the CUF report.

Some workforce development providers are wary of funding systems like Pay It Forward that rely on income-sharing agreements out of concern that students may find themselves indebted to the state without the good salaries they were seeking.

“If not built incredibly well, [the bond] will have a net negative impact on the population that’s being served, and not a net positive,” Jose Ortiz, Jr., head of the New York City Employment and Training Coalition, told CUF, as explained in the report.

Provisions like the five-year statute of limitations and the fact that loans are zero-interest may help New Jersey avoid this pitfall, according to the CUF report. The group also argues that being administered by state means the bond programs will make it easier to erect protections and recourse for students.

Because Pay It Forward provides "an investing environment for human infrastructure," it has the potential to create a more cohesive and expandable workforce development landscape, Dvorkin said.

"I think one lesson for New York is that innovative programs like this happen when there's a strong executive push from government to bring business leaders to the table around workforce development," Dvorkin said.