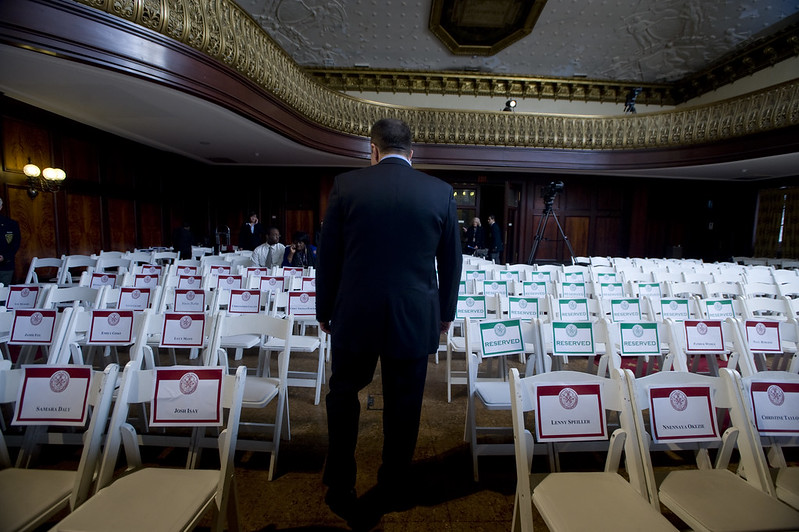 The New York City Council is set to kick off the process of redrawing the boundaries of the city’s 51 Council districts on Monday with Council members appointing eight members to an redistricting commission. The new districts, reflective of data from the 2020 Census and other factors, will be at play for the 2023 elections when all 51 seats of the City Council will again be on the ballot, as well as the subsequent 2025 and 2029 elections.

Under the city Charter, the new Council districts will be drawn by a commission of 15 members, who are unpaid appointees. The political party with the most Council members – Democrats hold 46 of 51 seats – appoints five members of the commission and the party delegation with the second-most representatives appoints three, in this case Republicans, who hold five Council seats. The other seven members are appointed by the Mayor.

On Monday, the Democratic majority, led by Speaker Adrienne Adams, and the Republican minority, led by Council Member Joe Borelli, are set to make their appointments.

The Republicans’ three appointees are Marc Wurzel, who is general counsel and assistant secretary at Grand Central Partnership, Inc. and who has served on a previous redistricting commission; Kevin Hanratty, a Queens attorney associated with the Republican National Lawyers Association; and Darrin Porcher, a retired NYPD Lieutenant and professor of criminal justice at Pace University.

The Democratic conference's nominees include Yovan Samuel Collado, director of community relations at the Carpenter Contractor Alliance of Metropolitan New York, from the Bronx; Kristen Johnson, assistant counsel for NAACP Legal Defense & Educational Fund, from Brooklyn; Gregory Kirschenbaum, an employment attorney from Manhattan; Maf Misbah Uddin, treasurer of DC 37, from Queens; and Michael Schnall, a nonprofit executive, from Staten Island. The conference's meeting to approve its nominees is also on the Council calendar for Monday.

A spokesperson for Mayor Eric Adams noted that the mayor has until March 7 to make his appointments, which he can only do once the Council has chosen its members. The spokesperson also said that the question of funding for the commission will be addressed this coming week (Adams’ preliminary budget for next fiscal year is due soon).

Once Adams has made his appointments and the commission convenes, it will hold a series of public hearings before creating a proposed map of districts. The map will then have to be released for public scrutiny for at least a month before it is submitted to the City Council. The Council can then make recommendations to the commission for any proposed changes before the commission adopts the final map and presents it to the City Clerk.

Unlike previous redistricting processes which had a longer timeline, this year’s commission will have to conclude its work by the end of 2022 because of the change in the state’s political calendar two years ago, which shifted party primary elections to June and because of a charter amendment that changed the redistricting procedure, according to Jeffrey Wice, professor at New York Law School’s Census and Redistricting Institute.

The commission has a challenging job ahead. In the ten years since the last Census, New York City added 629,000 residents, a roughly 7.7% increase in population to 8.8 million. That will mean an average increase of about 12,333 residents for each Council district.

But Council districts aren't all built the same and population growth in the city has not been evenly distributed. So-called communities of interest, bound together by various factors including religion or ancestry, and racial and ethnic demographics have shifted significantly.

There were also significant differences in population growth or loss for racial groups and neighborhoods. So, as the Council districts currently stand, some may be underpopulated while others are overpopulated.

"Many districts will have to change because of demographic shifts and new limits on the size of districts,” said Ben Weinberg, director of public policy for Citizens Union, a government reform group that analyzes redistricting. “Some areas are now ‘overpopulated’ beyond what's legally allowed, like the Brooklyn East River waterfront, which saw an influx of new housing units and residents in the last decade.”

New York City’s process is likely to be more balanced than New York’s redistricting of state legislative and congressional seats, new maps that were just passed by the Democratic-controlled Legislature and approved by Governor Kathy Hochul, a Democrat, this week. The final maps, criticized for partisan gerrymandering and at play in this year’s elections (pending a court challenge), were created by the Legislature after an independent bipartisan commission failed to come to agreement on a set of maps (which Democrats in the Legislature may have rejected anyway to draw their own).

“Unlike New York State’s redistricting process, the New York City Council process based on the city Charter has tighter, more efficient criteria, because they're ranked in priority order,” said Wice.

As he noted, the commission must adhere to a series of ranked criteria listed in the Charter, including, in order: population equity; fair representation of racial and language minority groups; ensuring neighborhoods and communities are kept intact; ensuring that each district is “compact and shall be no more than twice as long as it is wide”; districts cannot cross borough or county boundaries; districts cannot be drawn to separate concentrations of voters enrolled in the same party; and ensuring the districting plan “minimizes the sum of the length of the boundaries of all of the districts included in the plan.”

“The criteria are important there because as long as you achieve the top-rank criteria, it becomes harder to achieve some of the lower-rank criteria,” Wice added.

The Charter also states that districts have to be contiguous and if they are separated by a body of water, that they should be connected by a bridge, tunnel, tramway, or ferry service. If a district does include parts of two boroughs, then no other district can include territory from the same two boroughs. There are currently two City Council districts that cross borough lines: Council District 8, which includes parts of Manhattan and the Bronx, and District 34, which has parts of Brooklyn and Queens.

Wice also noted that the composition of the Council has changed dramatically since the last redistricting. The Council has 35 new members and is one of the most diverse classes ever seated, with its first female majority, and many other ‘firsts’ among its new class.

“We have to look to see who's representing those districts now. Does that reflect on where the district's lines should be redrawn? There’s a whole series of questions that have to be asked and evaluated,” Wice said.

Council Member Borelli, a Staten Island Republican, also believes the city’s redistricting will be fair. “Our process is more fair in that, at least, the minority party gets a guaranteed seat at the table, as opposed to the state plan where it was done in a smoke-filled room without anyone but majority Democrats making decisions,” he said in a phone interview. “In some ways, it seems to be a better system where we almost acknowledge partisanship and include it in the process.”

Borelli said he has been in contact with the mayor about his appointees as well, though no names have been advanced. “It seems to be at this stage going much more smooth than the state process,” he said. “If it ends up where a bunch of people are happy and a bunch of people are unhappy but that includes Republicans, Democrats, progressives, moderates in the mix, then I guess it works. When everybody who's unhappy is a Republican, that should be a sign the state process is flawed.”

Democrats at the state level have argued in the face of that type of criticism that they created new lines to reflect the reality of New York’s changed demographics and downstate population dominance, and that favor Democrats because the state is so heavily Democrats and maps in the past had been gerrymandered in some cases to favor Republicans, particularly in the State Senate.

Though the city commission will be independent, that doesn’t necessarily guarantee it will be entirely free from interference. The Charter only prohibits current city employees, lobbyists, and political party officials from being named to the commission.

“Although the city's redistricting process is slightly more independent than the one used by the state, it is still vulnerable for politicization because elected officials directly choose all commission members,” said Weinberg of Citizens Union. “To distance themselves from map-drawing, the mayor and the City Council should refrain from appointing former elected officials who served in office in the past five years.”

Citizens Union is preparing to issue a report on the redistricting process and has sent letters to the Council speaker, minority leader, and rank-and-file members with its recommendations. The group is also planning to provide resources and training for communities across the city to assist the public in participating in the process.

Weinberg recommended that the Council and mayor appoint a diverse commission. He pointed out that the charter requires the commission to include representatives of minority groups protected by the 1965 Voting Rights Act, but it does not consider factors like gender, age, and geographical representation. For instance, the last commission in 2012 had only two members from Brooklyn, out of 15 commissioners, despite it being the most populous borough.

He also urged Mayor Adams to quickly fund the commission to avoid any delays. The de Blasio administration did not set aside any funding for it in the current budget. “The commission will have to start working very soon, before the next budget is approved, and we can't afford to see the process stalled again,” Weinberg said.

John Mollenkopf, director of CUNY’s Center for Urban Research, worked on the city’s first redistricting commission and said in a zoom interview that the mayor could dominate the process if his appointees choose to collaborate with the Republican appointees. “In the past, there's always been a little bit of a tension between the mayor and the council,” he said.

Mollenkopf said the commission will face the challenge of creating new district lines where different communities have grown, which could rankle incumbent Council members who are resistant to changing constituencies. “There are some communities that are more or less encapsulated within districts, but there are other communities that are diced up and they're going to want to be included as much as possible in one district in order to have more influence on it,” he said.

One hurdle the commission will not face this time around is the requirement that it seek pre-clearance from the Department of Justice for its redistricting map, which was previously required by the Voting Rights Act of 1965. Under the Act, New York was one of several states that had to submit any plans for changes to electoral laws or districts for federal approval, in order to prevent racial discrimination in voting. But in 2013, the U.S. Supreme Court struck down those key provisions of the VRA, raising concerns among voting rights activists that it opened the door to restrictive and discriminatory voting policies. Though such policies haven’t been enacted in New York, which has in fact expanded voting in recent years, state legislators are nonetheless looking to pass legislation to reinstate those provisions.

“New York City is a lot less polarized in its voting than it was in the late 20th century,” Wice said. “And we have to undertake extensive analysis to determine which parts of New York City may still exhibit racially polarized voting.”

Note - this article has been updated with the names of the Democratic nominees to the redistricting commission.