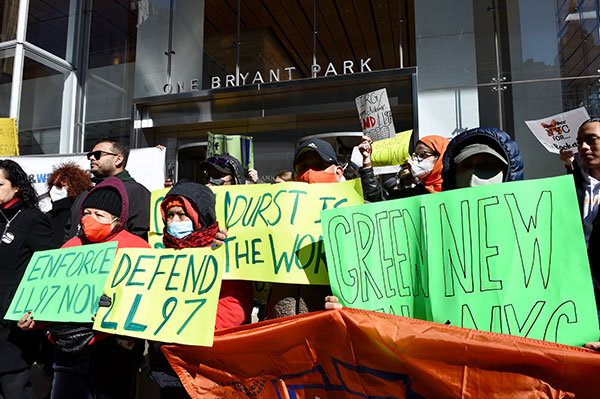 With climate crises bearing down on New York City, including hurricanes and tropical storms that flooded landlocked neighborhoods and killed more than a dozen New Yorkers last year, elected officials and activists are pressing Mayor Eric Adams to act with urgency in implementing a law to tackle carbon emissions in the city.

At a rally in midtown Manhattan on Thursday morning, climate activists gathered with officials including Public Advocate Jumaane Williams, Comptroller Brad Lander, City Council Members Alexa Aviles and Lincoln Restler, and former Council Member Costa Constantinides to urge the mayor to put his full strength behind Local Law 97, which sets emissions limits for the city’s biggest buildings, which are also its largest polluters.

The landmark, nation-leading law was passed in 2019, as part of the groundbreaking Climate Mobilization Act, also termed the “Green New Deal” for New York City. It was a major achievement for Constantinides, the lead sponsor, then-City Council Speaker Corey Johnson, who ensured its passage, Mayor Bill de Blasio, who signed it into law, and the climate activists who pushed for it, among others.

But now it is up to the new mayor, Adams, to implement the law successfully, and those who rallied Thursday are questioning his commitment to doing so.

Under the law, buildings larger than 25,000 square feet, which account for 40% of the city’s carbon emissions, will face emissions caps starting in 2024, with stricter caps to follow in 2030. The law mandates that property owners make significant upgrades to meet those caps through energy retrofits and addition of renewable energy systems, or face hefty fines that could run up into the millions for the worst polluting buildings.

One of those buildings is One Bryant Park, the site of Thursday’s rally. “We have to stop the climate crisis,” said Rachel Rivera, a Hurricane Sandy survivor and member of New York Communities for Change, an advocacy group, at the rally. “As bad as the climate situation is, it's also an opportunity to create jobs and a more fair society.”

Besides cutting emissions, Local Law 97 is expected to create tens of thousands of jobs in the green economy through the construction, design, and renovation required by the law. But its supporters worry about Mayor Adams’ approach to implementation and enforcement.

As Gotham Gazette reported last month, in his preliminary budget proposal released last month, staffing remained flat for the new Office of Building Energy and Emissions Performance, housed at the Department of Buildings and charged with overseeing the law’s implementation. Activists say the department needs at least 10-15 more staffers, up from the current six.

The mayor has also repeatedly questioned whether the fines the law will impose could be harmful and that subsidies to help building owners upgrade infrastructure may be insufficient. “It is vital that Mayor Eric Adams listen to the people, not real estate lobbyists and their big bags of money,” Rivera said, in reference to Adams, a Democrat, expressing similar concerns to real estate industry leaders.

“The Mayor acknowledges that in order to reach our environmental goals, the City needs to help ensure that retrofits and upgrades are easy and affordable,” an Adams spokesperson said in a prior statement to Gotham Gazette. “Fines don’t serve the goal of GHG reductions, but retrofits and upgrades create jobs. That is why he has supported City subsidies to assist property owners in need with the cost of retrofitting and called for significant investment in retrofitting the City’s own buildings as part of a broader strategy to ensure NYC is a national leader in reducing carbon emissions and in creating a green economy.”

“Crisis is the existential challenge of our time,” said Council Member Restler, a Brooklyn Democrat. “My district…it goes along the East River from Atlantic Avenue up to Newtown Creek. When that next big storm hits, we're in trouble. We need Local Law 97 to be implemented robustly.”

“We are here to demand people over profit,” said Council Member Aviles, also a Brooklyn Democrat. “Our lands, our air, our sun, our planet over profit.”

Comptroller Brad Lander, a Democrat new to his citywide perch, was one of the co-sponsors of the law when he sat on the Council,  and has pledged to use his office to advance climate justice initiatives including shepherding the city’s pension fund investments in green energy. He has also appointed the first chief climate officer in the comptroller’s office. “We must implement the law strongly, aggressively, support implementation, have real oversight and fines or it will not be worth the paper it's written on,” he said.

Lander also said that fines from Local Law 97 should go towards implementing similar energy upgrades at New York City Housing Authority public housing developments, which are subject to the law but not its penalties.

Earlier on Thursday, Mayor Adams was at the South Brooklyn Marine Terminal announcing an agreement to turn the port into one of the largest offshore wind port facilities in the country. At the Manhattan rally, Public Advocate Williams, also a Democrat, applauded the announcement, but insisted, “What we want to see is consistency in the administration on climate justice.”

“What we've heard so far, at best, is mixed messages when it comes to Local Law 97,” Williams said. “What we want to hear is a clear message from the mayor and administration that Local Law 97 will be fully implemented, fully enforced and fully funded…All of the issues that are being raised, all the questions were asked and answered before this bill was passed.”

Debate over implementation, especially staffing at the Department of Buildings’ Office of Building Energy and Emissions Performance, will likely continue throughout city budget season, with a new city spending plan due from Adams and the City Council by the July 1 start to the new fiscal year. The Council just began an initial set of hearings on Adams’ preliminary budget plan, with upcoming hearings that will focus on the Department of Buildings, the city’s climate goals, and more.

Constantinides, as chair of the City Council environmental protection committee, was one of the prime sponsors of Local Law 97 and emphasized Thursday that it was never meant as a revenue raiser for the city.

“It wasn't written as a revenue bill…,” he said. “We don't want anyone's money. We want their carbon.”