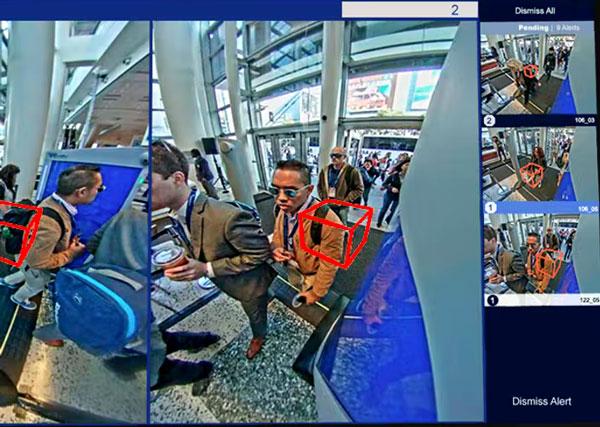 New York City is currently running a pilot program at Jacobi Medical Center in the Bronx using an advanced weapon detection system created by Evolv Technology, a Massachusetts-based security technology firm, and Mayor Eric Adams has indicated that the technology could eventually be rolled out in schools across the city.

In the wake of several incidents of gun violence in the city this year, Mayor Adams has emphasized the need to expand surveillance technology to capture people with weapons, including it in his “Blueprint to End Gun Violence,” which he released in January. In the context of school safety, which also falls under the purview of the NYPD, Adams has repeatedly said the city is testing new technology that will help identify people carrying guns and other weapons into schools.

“[W]e must be smarter. I'm going to be rolling out in a few days a device that we're testing, that allows us in a humane way to identify guns and weapons,” Adams said in response to a question about school safety at an unrelated news conference on February 23, in apparent reference to Evolv Technology’s weapons detection system. “Everyone is asking about this device. We want to make sure we test it properly, and we're currently in the process of testing it. And we're going to place it in schools so we could do a better job in identifying weapons.”

Unlike standard metal detectors, Evolv’s touchless machines scan and screen people as they walk past, throwing up visual alarms on connected monitors when it indicates a weapon may be located on a person. The machines don’t require people to take off their bags or empty their pockets, speeding up entry into facilities.

Jacobi Medical Center made an apt choice to test the technology following a shooting in the hospital’s emergency room in January in which one person was injured. The New York Daily News also reported that dozens of weapons have been confiscated at hospitals in the last year.

“We are piloting new technology at the Jacobi Hospital emergency room to screen for unlawful weapons to increase the safety of our patients and employees,” said Christopher Miller, a spokesperson for NYC Health+Hospitals in an email. “In addition, we have also added uniformed NYPD officers to support this pilot. Our goal is to continue to have a welcoming and secure environment for our patients and staff.”

Miller noted that the pilot is just one piece of the city’s broader approach to public safety and tackling illegal guns.

Jacobi Hospital is not the only facility in the city employing Evolv’s machines. According to a City Hall spokesperson, the technology is also being used at the Lincoln Center, New York Presbyterian Hospital, Citi Field, the Metropolitan Museum of Art, the Museum of Natural History, MOMA, 1 Vanderbilt, Hudson Yards, among other locations. In all in 2021, according to the company, its technology screened 11 million people at private institutions in New York City. (It was also used at the Super Bowl this year to screen the entire perimeter of SoFi stadium in Inglewood, California, among other places and venues outside of New York City.)

According to the Adams administration spokesperson, the Jacobi program is a free pilot and once it is completed, City Hall will conduct an analysis to determine whether it could potentially be used in other facilities.

The company claims its scanners are ten times faster than metal detectors, that they lower labor costs by 70%, and can screen 3,600 people an hour. The company, which launched in 2013, claims to have screened 150 million people worldwide so far, “second only to the U.S. Department of Homeland Security’s Transportation Security Administration.” It has been used at ​​stadiums, casinos, hospitals, schools, government buildings, houses of worship, and hotels.

Elizabeth Yekhtikian, a spokesperson for Evolv, said in an email that the company “aren’t able to discuss the pilot yet as it is in early stages.” If Adams were to decide to expand the use of the technology to schools, the city will likely have to invite bids for contracts, though Evolv could potentially be a likely winner given its place in the market.

Adams’ push for the use of new technology in schools has come in the wake of a surge in weapons recovered in schools in the current academic year, part of a larger picture of rising violence in the city over the last two years. But, it has also raised concerns for civil rights activists who worry about the lack of transparency around the technology, proof of its efficacy, and possible racial bias.

“I’m concerned by the proliferation of millimeter wave scanning throughout the city. The systems can be far more invasive than a metal detector, potentially capturing naked photos of every person who walks through,” said Albert Fox Cahn, founder and executive director of the nonprofit Surveillance Technology Oversight Project, in an email. “We’ve seen images from these systems leaked and hacked in the past, I wonder how long it will be before we see a similar security breach here. Even worse, I’m not aware of any independent research backing up manufacturers’ claims, so I truly have no idea whether this technology actually works and when it will get it wrong.”

Experts at the New York Civil Liberties Union had a long list of complaints about the technology and the mayor’s eagerness to significantly expand its use. As Johanna Miller, director of NYCLU’s Education Policy Center, pointed out, the city currently uses metal detectors at select schools that tend to have majority Black and Latino students, and the Department of Education and NYPD have a record of refusing to be transparent about where those detectors are located. NYCLU even sued for that information in 2020.

“It's, in fact, almost unheard of that they would subject white or wealthier students to daily screenings like this,” Miller said in an interview.

“What I see here is a long history of the NYPD evading transparency and the mayor just leaning into that and joining them with it,” she added. “And this is a pattern we've seen so far in the school safety conversation with this mayor, and it's really problematic.”

As Miller noted, city schools aren’t institutions like Lincoln Center or The Met. “To say that if they work for those populations, they'll work for a school, which is a captive population that's required to be there and has no choice…We're talking about children who are showing up at school with whatever baggage is making it hard for them to be at school.”

Daniel Schwarz, NYCLU’s privacy and tech strategist, pushed back against the argument that the new scanners will be more humane and friendly compared to standard metal detectors. “It might be a little bit less obvious than metal detectors and people will move through it more quickly. But the technology is no less invasive,” he said.

He also argued that there aren’t a sufficient number of studies or data to prove the effectiveness of machines like Evolv’s scanners. And the company also uses other technology including artificial intelligence and visual venue analytics, which Schwarz said is plagued by racial bias. “There's so little we know about this proposal, but from what we can tell it's already highly-flawed and problematic,” he said.

For its part, Evolv touts the use of its scanners specifically in schools. “Unlike the invasive pat downs, wands, bag checks and long lines experienced with legacy metal detector technology,” the company’s website says, “the Evolv Express system keeps your school entrances flowing by reliably detecting guns and other weapons as students, faculty and visitors walk through at a natural pace, carrying their phones, backpacks, lunch bags and other harmless personal items.”