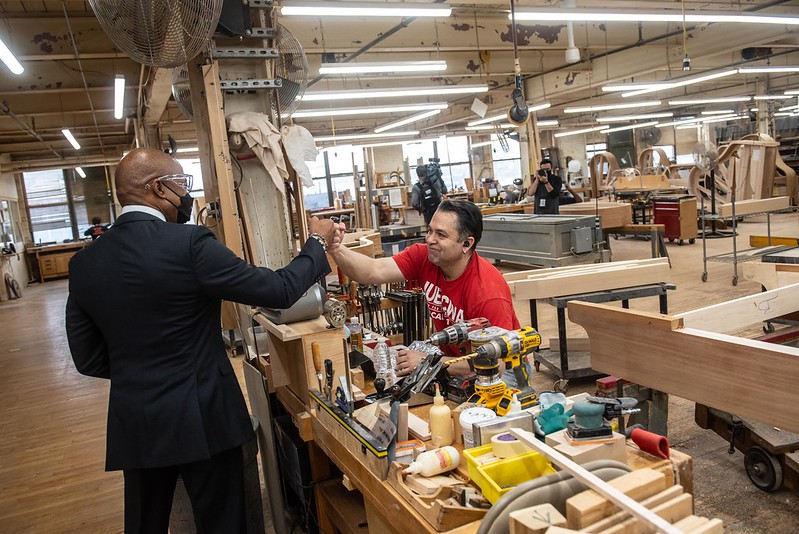 The New York City Council convened an oversight hearing Monday on the city’s workforce development programs and plans amid pandemic recovery efforts. It was the first time Council members heard from officials in the administration of the new mayor, Eric Adams, who has repeatedly said workforce development is a top priority for him.

While the officials present discussed Adams' vision for the city's economic recovery, they were not able to present a clear plan on some of the most glaring, long-standing issues with New York City's decentralized system of job training, recruitment, and placement. And the administration was not represented by the top official in charge of the issue, Deputy Mayor for Economic and Workforce Development Maria Torres-Springer, or anyone from her office, which was responsible for crafting Adams’ “blueprint for New York City’s economic recovery.”

While there was broad agreement on some of the principles shared and problems identified, the Council members present were at times frustrated by the incomplete picture they received. The hearing was held jointly by the City Council Committee on Economic Development and Committee on Oversight and Investigations to examine "the city’s evolving workforce development plans in the wake of the pandemic."

With New York City's economy on the rebound, an unemployment rate still twice pre-pandemic levels, and amid accelerated shifts in burgeoning and declining sectors, workforce training providers say now is the time for major investments in the city's labor market. Mayor Adams embraced that spirit on the campaign trail, regularly talking about workforce development as a top priority, and during his transition.

Earlier this month, Adams released the economic recovery "blueprint" with an explicit goal to return employment to pre-pandemic levels and a number of policies devoted to inclusive hiring and workforce development. Some of the key principles Adams and others have cited for improving workforce development in the city are investing in sectors with good-paying jobs that don't require a college degree, improving public-private partnerships, expanding programs at CUNY, and removing barriers to access training programs.

But New York City continues to face the problem of a fragmented workforce development regime, something providers and advocates have criticized for years. The city has over 75 workforce development programs administered through 21 separate agencies, creating redundancies and gaps that make programs difficult to evaluate and bring to the scale providers say is needed. While jobs in some well-paying sectors are expanding, like healthcare and tech, there is a lack of quality training programs to give the roughly 300,000 unemployed New Yorkers a shot at getting them.

At the Council hearing Monday, held jointly by the committees on economic development and oversight and investigations, officials from the city’s Department of Small Business Services (SBS) and Economic Development Corporation (EDC) – two agencies with large workforce training and recruitment portfolios – answered lawmakers' questions about their workforce development programs.

"There's not a lot of coordination. There's no single overarching vision," said Council Member Gale Brewer, a Manhattan Democrat who chairs the committee on oversight and investigations, of the city's approach to workforce development. That makes it hard for job-seekers to navigate the market and difficult for the city to identify gaps in the workforce development landscape, she said.

"The data is not what it should be," Brewer said. "The outcomes of workforce development programs are not available in a way that is easy for us to understand and to be able to compare different programs…Are we getting our investment?"

According to SBS First Deputy Commissioner Jackie Mallon, agencies responsible for overseeing the strategic direction of the city's workforce development programs are the Mayor's Office of Workforce Development, for adults, and the Mayor's Office of Youth Employment, for young people – neither of whom were present at the hearing.

"Regretfully, the Mayor's Office of Workforce Development isn't present today to join us and discuss the plan, successes, challenges, and the future planning of our city's workforce development," said Council Member Amanda Farías, a Bronx Democrat and the economic development committee chair.

But Mallon pointed to other elements of the mayor's blueprint she said were intended to promote coordination among the various workforce development entities.

One of them is the "Future of Workers taskforce" of industry leaders, workforce development providers, and organized labor. "The intention is to bring public and private partners together to sort of look at the end-to-end challenges, meaning [kindergarten] through adult, find the gaps, figure out what needs to be on the short-term and the long-term," Mallon told Council members. She did not give more detail and the blueprint report does not describe how the task force would work or who would be part of it.

There is also Adams' promised jobs portal – a proposed database of available jobs, jobseekers, and training programs that the city will launch later this year, according to the blueprint.

SBS offers existing workforce development programs like the city's Workforce 1 Career Centers, which connect candidates to jobs and offer related training. During the pandemic, SBS trained 11,000 New Yorkers and connected 34,000 with jobs, according to Mallon.

Both separately and in collaboration with SBS, EDC has a number of job creation initiatives under Adams' blueprint, including a $1 billion life sciences initiative and an off-shore wind project at the South Brooklyn Marine Terminal slated to create 13,000 jobs, among others.

At the hearing, Mallon defended the coordination among city agencies. "We are working really closely with EDC to ensure we're using our strengths in the best way we can," she said. "In every case, where possible, we try to source candidates from sister agencies like NYCHA and DYCD and HRA so that we are making our training offerings available to everyone that needs them."

"I hear you on the data but there is maybe more collaboration than is apparent," Mallon added.

"Does this mean that work is being duplicated in at least 55,000 cases," asked Farías.

"No, on the surface it doesn't sound like a good number," said Mallon, who noted she was not familiar with the data. She noted all city agencies would eventually be reporting into the system but didn't have details on the status of that plan.

The New York City Employment and Training Coalition, an association of workforce development providers and advocates whose recent executive director, Jose Ortiz Jr., was hired by Adams as a top workforce development advisor in the deputy mayor’s office, lauded the spirit of Adams' economic recovery blueprint but urged immediate action.

Providers are pushing the city to allocate $250 million to re-employment programs that provide wage subsidies and training to get unemployed residents back to work. The coalition is also seeking a recurring annual investment of $100 million in training programs, including $20 million for bridge programs to build the prerequisite skills for more advanced talent development courses.

To achieve the level of inclusivity Adams has touted in his blueprint, workforce development providers say the city needs to expand the collateral supports that make it possible for low-income New Yorkers to participate in training programs – things like childcare, transportation, and nutrition assistance.

"The blueprint laid out by the Adams administration is an encouraging start, but we need to do more if our recovery is to leave no New Yorker behind," said Annie Garneva, the new CEO of NYCETC, in her testimony before the City Council.