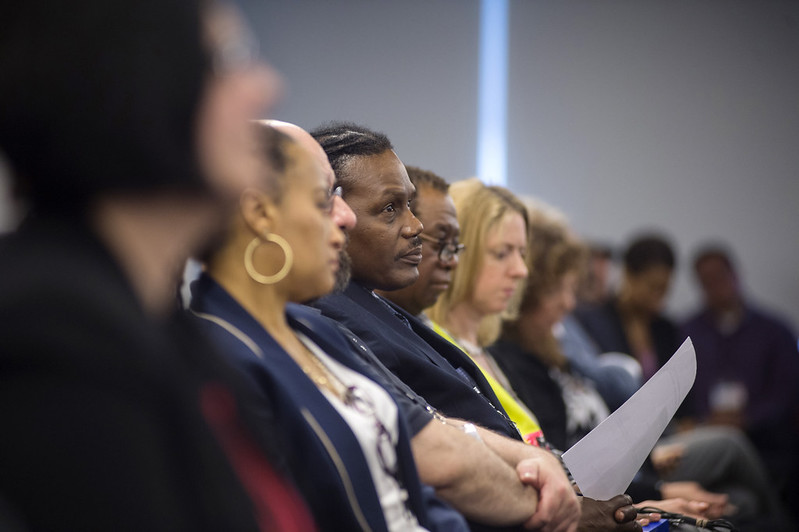 New York City may be missing an opportunity to stimulate minority-owned businesses and support commerce and employment in marginalized communities, a new report argues.

The number of Black-owned businesses in New York City has grown faster than that of white-owned businesses in recent years, but the former still earn less on average and employ fewer people. While much of the city's effort to support minority- and women-owned businesses (MWBEs) focuses on city contracting, there are few public or private programs aimed at helping successful companies scale up, according to the report from Center for an Urban Future (CUF), a think tank focused on economic mobility. Experts say missing this second step has hampered growing efforts to nurture MWBEs and create more opportunities for workers of color.

Mayor Eric Adams has talked about supporting small businesses, especially those owned by people of color, which have been hit especially hard by the economic crisis. When he released his economic recovery "blueprint" last month, Adams told reporters that meant "providing the tools that are needed to move forward, and it includes expanding on those new businesses that we think should grow in the city." But, while the plan devotes significant space to improving MWBE contracting with city agencies, it includes only a few points on growing small businesses and no comprehensive strategy for helping them scale.

"Businesses of color just don't have the financial resources to scale,” Camille Newman, director of the Brooklyn Women's Business Center, an mentorship organization for entrepreneurs in East New York, says in the CUF report. “You'll often hear women of color say they're over mentored and still underfunded. It's one thing to provide the mentorship, but if you're not getting the help scaling, it really doesn't help the business to grow and to get to the point where they can become even more impactful in the community.”

The city's 64,500 minority-owned employer businesses – defined as Black, Hispanic, Asian and Pacific Islander, and Native American or Alaskan Native – earn on average less than half what their white counterparts make in annual revenues and employ close to half the average number of employees, according to CUF. Approaching equity with white-owned businesses would contribute to the economic recovery of historically underserved communities that have been disproportionately devastated by the pandemic.

It could also be a key to the city's overall recovery. According to CUF's analysis, raising the average employment and revenue levels of minority-owned businesses to white-owned rates would create 326,000 jobs and add $63 billion in annual revenue to the city's $776-billion economy.

To tap even part of that potential, the city must do more to facilitate corporate spending on MWBEs and expand technical and strategic support for businesses looking to scale-up, CUF argues. The report is part of Center for an Urban Future’s Economic Opportunity Lab series, which examines successful economic development programs in other cities that could be replicated in New York. It points to Cincinnati's "Minority Business Accelerator" as a model for the Adams administration to follow.

The Accelerator is a consortium of corporations housed in the Cincinnati Regional Chamber of Commerce that provides business consultation and sets coalition-wide goals for contracting with minority-owned businesses. The program's services aren't open to all businesses, only those with annual sales of at least $1 million and a demonstrated growth potential. Since its launch in 2003, it has served only 70 businesses but has helped generate $1.2 billion in revenue and 3,500 jobs.

"That's by design," said Eli Dvorkin, CUF's editorial and policy director. "Not every small, minority-owned firm is poised to grow into a medium-sized business or larger. But for those that are, these interventions can help accelerate progress and contribute to more equitable economic growth across the city."

Given the size of New York's economy, a program modeled on Cincinnati's has the potential to partner with hundreds of major companies, Dvorkin said.

Under the model, the city would coordinate a broad range of players in the business-growth ecosystem: the five borough-based chambers of commerce, community development financial institutions (CDFIs), the city government’s Department of Small Business Services, public libraries, and others. CUF wants Mayor Adams to leverage his ties with business leaders to establish a similar network of major companies to participate in the small business supply chain.

While some large companies have made commitments to diversity in their suppliers, there has been no concerted city effort to connect business-owners of color to corporate procurement. What services the city does offer for scaling small businesses are limited.

Dvorkin gave the examples of the city's Black Entrepreneurs program (offering up to four hours of business consulting total provided by Ernst & Young)) and the Neighborhood Credit Fund (offering an average loan of $25,000 to small businesses looking to expand). One of the closest to Cincinnati's Accelerator model is the Corporate Alliance Program, run by the Department of Small Business Services, which pairs small businesses with corporate mentors and contracting opportunities. But according to the CUF report, it has not enrolled a new small business since 2019.

Two of the proposals would expand the city's Free Tax Prep services to small businesses, freelancers, and gig workers; and ease the application process for, and suspend a 25% surcharge on, liquor licenses. The third, and according to Dvorkin, most growth-oriented of Adams' proposals, would double the staff of a pandemic-era program meant to connect small businesses to available loans and grants, known as the Small Business Resource Network. It would also refocus the network –  the outcome of a partnership between the five borough chambers of commerce, New York City Economic Development Corporation, the Partnership Fund for NYC – on outreach and helping small businesses "expand their digital and marketing footprint through website builds, branding and logo design, search-engine-optimization consultations, and e-commerce platform onboarding."

The City Council has earmarked $1.5 million to support small business e-commerce, which Dvorkin said would be a positive step. City government now spends over $1 billion a year on MWBE contracts out of roughly $32 billion in annual contracting.

The CUF report is focused on steps the city can take, but the state, with its massive economic development budget, also has a role to play. Dvorkin said Governor Kathy Hochul could use her ties to business leaders and the state's Empire State Development public benefits corporation to create a state-level program in line with the Accelerator, with goals and commitments for corporate contracting with minority-owned businesses.