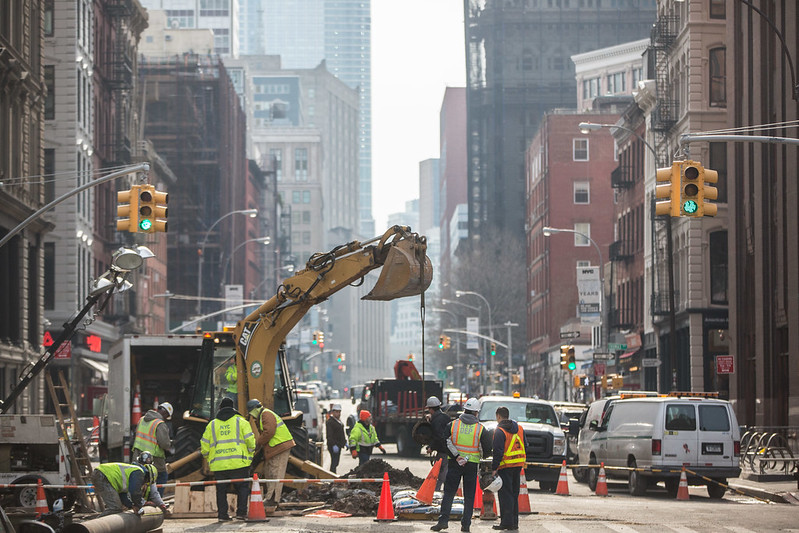 The $1.2 trillion infrastructure law enacted in November by Congress and President Joe Biden is expected to funnel about $27 billion to New York State, with a hefty portion of that funding flowing to New York City. The City Council wants to ensure that those resources will be used well and distributed equitably across the city, and at a hearing on Tuesday, Council members sought plans from Mayor Eric Adams’ nascent administration to accomplish that goal.

Tuesday’s joint hearing was held by the Council’s Committee on Transportation & Infrastructure, chaired by Council Member Selvena Powers-Brooks, and the Committee on Resiliency and Waterfronts, chaired by Council Member Ari Kagan. Over the course of more than three hours, the chairs and their colleagues pressed Adams administration officials on the various pots of money that the city will receive and the funding streams they are competing for. They asked about broader infrastructure priorities and about individual projects in their districts, while urging the administration to take full advantage of the historic amount of funding that will be available over the next five years.

“[It’s] not hard to see that the city has serious work to do,” said Brooks-Powers, a Queens Democrat, in her opening statement. “For too long, we've prioritized the short-term and deferred preventative maintenance and investment in things like our roads and bridges, leading to much higher costs down the road. Failing to prioritize infrastructure investments doesn't just impact our ability to deliver positive outcomes in the areas of transportation and resiliency. It also has ripple effects that put safety at risk and cripple our ability to promote access to jobs and economic growth.”

The pandemic further exposed many infrastructure inequities in the city, including the lack of health facilities, transit, affordable housing, and green open spaces in communities of color, which have been disproportionately harmed by COVID-19. It has prompted a broad debate about reinvesting in underserved communities, which was a central issue at the hearing.

“While all communities in the city will benefit from increased funding for infrastructure, it's important that we not miss this chance to pay back some of the debt owed to communities that have experienced decades of disinvestment, had their neighborhoods divided by highways, or watched the city fail to address the growing threat of climate change in their neighborhoods,” Brooks-Powers said.

Recognizing those growing threats of the climate crisis, Council members were focused Tuesday on the city’s plans for resiliency and sustainability, particularly after recent adverse weather events that were fatal for many New Yorkers. “Even simple heavy rain yesterday caused a lot of serious problems for ordinary New Yorkers,” said Council Member Kagan, a Brooklyn Democrat.” We have a huge task in front of us and we must be proactive in how we make our city, our shorelines, and our infrastructure more resilient.”

Under the federal Infrastructure Investment and Jobs Act (IIJA), there are various streams of funding at the city’s disposal, many of which will be available over five years. Direct formula funding will flow to New York State, which will then distribute it to municipalities through direct grants and competitive awards. There are also competitive federal grants that the city will apply for, and the federal government is expected to release guidelines for those grants over the next year.

Some of the direct funding includes $10.7 billion for the MTA, $2 billion for bridges and tunnels in the city, $685 million for airports, and $50 million for street safety infrastructure. At the state level, $100 million was allocated for broadband infrastructure and $175 million for electric vehicle charging stations. Another $8 billion in federal funding is going to the Gateway Project, which includes the crucial repair of the Gateway Tunnel connecting New York and New Jersey. The Federal Emergency Management Agency, FEMA, will also invest about $6.8 billion in climate mitigation projects in the state.

Kizzy Charles-Guzman, MOCEJ executive director, outlined the city’s many efforts to reduce its carbon footprint, shift towards a greener economy, and protect against the various adverse effects of climate change, all of which will be bolstered by federal funding. “The city is going after every dollar we can as this once-in-a-generation level of investment that presents an opportunity for the city to access funding for many critical infrastructure projects will benefit residents for decades to come,” she told the Council.

Charles-Guzman said the bipartisan infrastructure legislation funds more than 350 distinct programs, including many new ones. “Our office is coordinating with [the city’s Office of Management and Budget] and city agencies to take full advantage of these resources as they become available,” she said, outlining several grant programs the city has applied for including for resilient street projects, electrification for transit alternatives, stormwater and clean air projects, programs to “weatherize, decarbonize and flood proof” homes, among others.

Will Carry, assistant commissioner for policy at DOT, said that despite the major infusion of federal cash, most transportation capital projects will continue to be funded with city dollars.

In total, the DOT expects to receive $1.3 billion over five years in highway formula funding, of which $470 million was already allocated in the city’s expense and capital budgets prior to the infrastructure bill being passed. Carry said the state’s initial allocation of formula funds to the city will be about $193 million, 23% higher than the $157 million it previously received. He also said the state has allocated about $3.6 billion in formula funds for discretionary grants, for which the city will compete.

For newly-created programs, however, while Carry said the city has received some indication of the federal funds it will receive through the state, the administration is still waiting for details of those awards. “Ultimately, the state has broad discretion over how much of this new funding will flow to New York City,” he said.

In terms of discretionary funds, Carry said the DOT can now compete for roughly double the amount, about $10 billion through 30 different programs. “Our work to pursue these funds is well underway,” he said.

Among the main changes in the new infrastructure law is that it adds resiliency projects as an allowable use for Federal Highway Performance Program funds. The bill includes $7.3 billion in formula funds and $1.4 billion in competitive grants over five years. “This new funding and flexibility will help us to advance our resiliency efforts,” Carry said.

With the several streams of funding on the table, Council Member Brooks-Powers pressed the administration to explain its coordination efforts to pull the most it can from the federal government.

“We agree that in order to be successful in securing as much BIL funding as possible, we need to be extremely organized,” Carry told her. He said the administration has created a working group to track 30 different discretionary grants, while his colleagues are coordinating with the state on formula funding.

Charles-Guzman also noted that internal efforts are underway and are being coordinated under the oversight of Deputy Mayor for Operations Meera Joshi and the city budget office.

Brooks-Powers urged the administration to ensure that equity is the focus for infrastructure projects and that underserved communities are a top priority. It’s a goal shared by Mayor Adams, and DOT commissioner Ydanis Rodriguez, Carry said. “We wholeheartedly endorse the idea of focusing new resources on communities that have previously seen less investment in the past,” he said.

“[Mayor Adams] is firmly committed to investing in the outer boroughs and specifically in historically underserved neighborhoods,” Charles-Guzman said.

The officials made several commitments through the hearing and emphasized the various priority areas for the administration. They spoke of their focus on street safety and Vision Zero projects and a commitment to contracting with Minority- and Women-Owned Business Enterprises (MWBEs), all areas of focus for the Biden administration when crafting the infrastructure plan.

On one question, at least, they had little to offer without additional details from the federal government. When asked how the city will track the use of federal dollars, Kathleen Schmid, deputy director of MOCEJ, said, “I think we will work with OMB and City Hall to think about how best to track the receipt of federal grants…and can return to talk about that at a future time.”

Other Council members pressed the administration on various infrastructure issues and individual projects during the hearing, and officials promised that they were either currently working on a solution or would address them in the future.

Council Member Kagan pushed for using federal funds for the restoration of the Coney Island Boardwalk, and for accessibility projects across the city. “DOT and the administration are committed to making our transportation and our street networks accessible to all New Yorkers, regardless of level of ability,” Carry said, mentioning several projects underway.

Council Members Linda Lee and Vickie Paladino, a Democrat and a Republican of Queens, spoke of the need for parking for commercial trucks in their districts. Though Carry said part of the solution may be greater enforcement of DOT regulations, he also spoke of a larger vision to shift freight from trucks to rail and boats to reduce truck traffic.

Council Member David Carr, a Staten Island Republican, argued for the extension of the HOV lane on the Staten Island Expressway, a proposal that has languished for years. Carry said the administration supports the project and promised him more information on its status.

Council Member Joann Ariola, a Queens Republican, asked for a study on improving the blighted neighborhood known as “The Hole,” a five-block long triangular stretch between Brooklyn and Queens that is 30 feet below surrounding areas and is prone to flooding.

“it's definitely on our radar,” Charles-Guzman said.

Louise Yeung, the first Chief Climate Officer at the Comptroller’s office, said the city should advance shovel-ready projects while reforming capital project management and planning, be laser-focused on climate justice, improve coordination between city agencies and develop a proactive local hiring plan. “New York City needs to prepare now for this opportunity, both to maximize the federal funds we receive, and to maximize the benefits of the funds we get,” she said, according to her written testimony.

Kate Slevin, executive vice president of Regional Plan Association, a nonprofit research and advocacy group, said the city should prioritize “health, equity, prosperity and sustainability” in spending infrastructure funds. “If projects don’t align with health equity and environmental justice outcomes, they should be reevaluated,” she said.

“The city, state, MTA and all other eligible partners must take advantage of the opportunities [the IIJA] presents to build a stronger, more resilient, sustainable and equitable transportation network and region,” said Lisa Daglian, executive director of the Permanent Citizens Advisory Committee to the MTA. Federal funding will be critical to meeting our transit needs and our climate resiliency goals.”

Daglian called on the city to prioritize citywide sewer capacity projects to help prevent subway flooding from extreme weather events, and to expand dedicated bus lanes, busways and transit signal priority to help speed up bus service in the city.