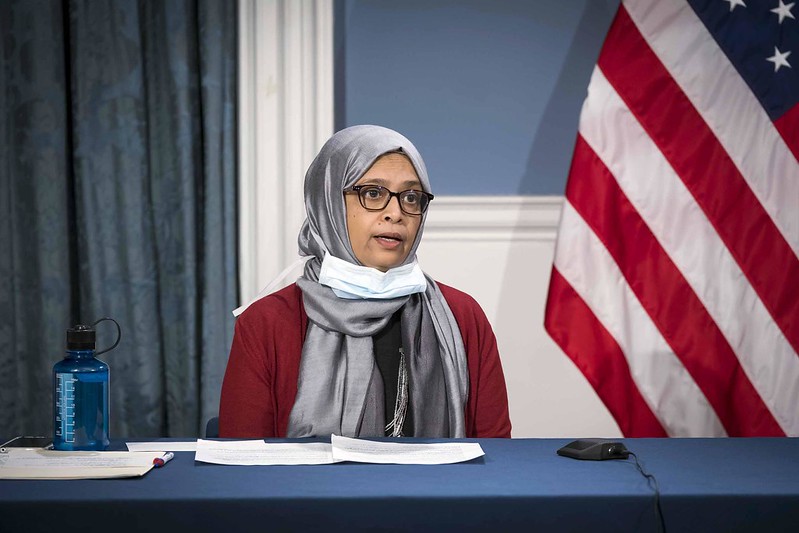 The first citywide participatory budgeting program is expected to launch later this year after a two-year delay largely due to the COVID-19 state of emergency, officials said at a City Council hearing last week.

The program was approved by voters in 2018 as one of three City Charter-mandated functions of the new Civic Engagement Commission (CEC) created in the same ballot referendum. The two-year participatory budgeting process, intended to give New Yorkers a more direct say in how some tax dollars are spent, will begin in "late summer," according to CEC Chair and Executive Director Dr. Sarah Sayeed.

"We are actively engaging multiple stakeholders through June 2022 to gather feedback on various aspects of the program…particularly around the use of civic tech, evaluation, and outreach and engagement strategies to ensure an inclusive process," Sayeed told members of the City Council's Committee on Governmental Operations on Friday. It was the first time the CEC has been the subject of an oversight hearing in the rocky three years since it was created through a charter revision commission assembled by former Mayor Bill de Blasio and approved by voters.

The Civic Engagement Commission has three specific responsibilities under the Charter: implementing citywide participatory budgeting; providing urban planning expertise to community boards; and assisting in language interpretation at poll sites. In 2021, then Mayor Bill de Blasio signed an executive order to bring DemocracyNYC, another city office dedicated to boosting voter turnout and civic engagement, under the purview of the commission.

De Blasio is also largely responsible for creating the CEC in the first place, having initiated the Charter revision process that established it. The body consists of 15 members: the chair and seven others appointed by the mayor, two by the City Council, and one by each of the five borough presidents.

The CEC's overall budget in the current fiscal year (2022) is $4.87 million, according to Sayeed. The commission currently has nine full-time staff positions, but is hiring an additional 10 as part of the participatory budgeting rollout.

"While I applaud the CEC's effort to make do with the resources it had available these smaller scale programs were a far cry from the citywide program that New Yorkers were promised when they voted to establish the CEC in 2018," said Council Member Sandra Ung, a Queens Democrat and chair of the governmental operations committee, at Friday’s hearing.

In late April, Mayor Eric Adams released a $99.7 billion executive budget proposal for fiscal year 2023, which begins July 1. The spending plan includes a $5 million citywide participatory budgeting program to be voted on in fiscal year 2023 and implemented in fiscal year 2024, according to Sayeed.

The CEC is currently developing a plan to implement the citywide project in consultation with an advisory committee and other government offices. The program is modeled on the City Council's participatory budgeting system that allows communities to propose and vote on capital projects in their districts, like improvements to parks and public spaces.

The Council program has been voluntary for Council members to choose to operate in their districts. The citywide version will be using expense budget dollars that Sayeed said will fund shorter-term projects that will show results more quickly than capital infrastructure projects. The Commission intends to vote on the details of the implementation plan by the end of July.

The program will take two years. The first year, through June 2023, will be dedicated to developing the projects members of the public will be voting on. Implementing the winning projects will take place from July 2023 through June 2024 (city fiscal year 2024). City Council members will still be able to use their discretionary funding to run separate participatory budgeting programs in their districts.

Lawmakers at the hearing Friday raised concerns about the platform CEC has been using to pilot participatory budgeting. The CEC is currently using an open-source online platform called Decidim that allows users to pitch, discuss, and vote on proposals and policy. Over the last two years, the CEC used the platform for a $100,000 participatory budgeting program for youth and a $1.3 million program in the 33 predominantly Black, Latino, and immigrant neighborhoods identified by a city task force as hardest hit by the pandemic. It was also used by the 13 City Council members who opted to bring participatory budgeting to their districts this year (a number far lower than pre-pandemic participation rates).

"I think this cycle garnered probably the lowest voter turnout, not because people weren't excited about deciding how to spend the city's dollars on projects that are dear to them but because of how inaccessible the website was," said Council Member Shahana Hanif, a Brooklyn Democrat.

"I'd love to figure out how to make this work because if we keep Decidim we're going to fail PB in the city," Hanif told Sayeed.

Sayeed defended choosing Decidim but acknowledged the process was a work in progress. "We researched a variety of different platforms and found this one seemed to be the best one and also allows us to stay connected with other municipalities who are doing this work," she said. The commission is doing user-experience testing and is open to "tweaking" the platform.

"As a new agency we're building the plane as we fly it and we're continuing to learn along the way," said Sayeed.

Poll-Site Interpretation Services
The CEC also provides translation services at poll sites in languages not covered by the city's Board of Elections, which offers interpretation in six languages mandated under the federal Voting Rights Act.

In recent elections, CEC translators have covered 25 poll sites during the last weekend of early voting and 75 sites on election day. While the Charter requires the CEC to set a methodology for deploying services, that formula is contingent on how much funding the mayor and City Council provide.

"The total number of poll sites depends on the amount of money allocated to this program, availability of qualified interpreters for the Program languages, and the time needed to recruit interpreters," Sayeed told the Council.

The CEC has a $1.8 million allocation for interpretation services in the current fiscal year. Languages include Arabic, Bengali, Cantonese, French, Haitian Creole, Italian, Korean, Mandarin, Polish, Russian, Urdu, and Yiddish. The body served only 2,784 voters across three elections in 2020 and 2021 (one primary and two general elections).

The CEC is also responsible for offering language access services and other training; all 59 community boards now have telephonic translators provided by the CEC, according to Sayeed.

Following a "Request for Expressions of Interest," the CEC compiled a list of 13 urban planning consultants, including minority- and women-run firms (MWBEs), for community boards to use.

City Council Member Gale Brewer, a Democrat and the former Manhattan Borough President, said the CEC's mandate to provide consultants was "duplicative" of existing borough presidents' and nonprofit efforts and worried about the potential for influence from City Hall.

"We did the MWBE directory, that's the only thing we've done to date," said Sayeed, defending the CEC's role. "Anything we do in the future will be coordinated and non-duplicative."

"I didn't want you involved with the community boards, I'll be honest, because I think it's a conflict," Brewer said, referring to the mayor's ability to hire and fire CEC leadership. "I think they should be independent, not subject to anything that the mayor does."

"You have a big staff so I'm trying to think of what more you can do," added Brewer, who chairs the Council’s investigations and oversight committee.