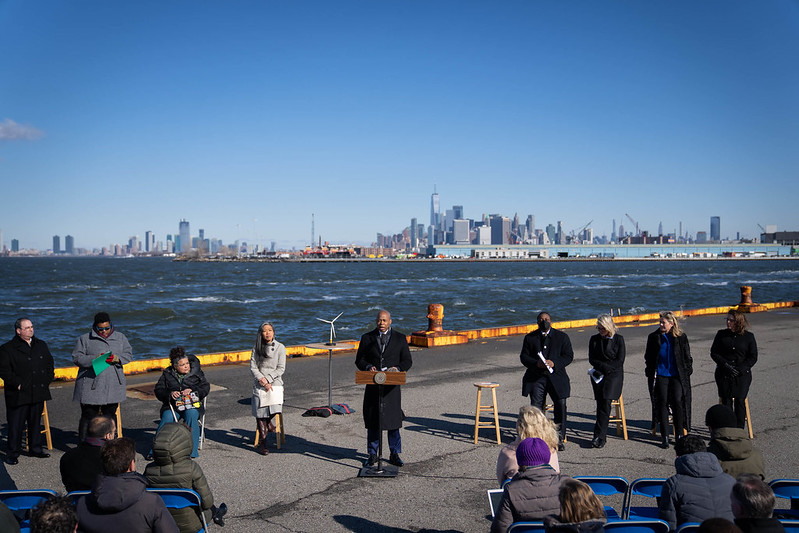 New York’s sweeping Climate Leadership and Community Protection Act of 2019 set the state on a path to reaching net-zero emissions over the next three decades. The law established a Climate Action Council that drafted a framework for achieving that goal, and is now more than halfway through the process of seeking public input on its proposed plan.

The Council held its seventh public hearing on Tuesday in Brooklyn, out of eleven total scheduled, where elected officials, advocates, and other stakeholders testified about its initial draft scoping plan to cut greenhouse gas emissions, transition to renewable energy sources, electrify transit, and take other measures.

The CLCPA requires the state to cut economy-wide greenhouse gas emissions by 40% by 2030 and by 85% by 2050, compared to 1990 levels, all while creating hundreds of thousands of green jobs and investing in historically disadvantaged communities that have borne the brunt of environmental injustice and are at highest risk from the adverse effects of pollution and climate change. Under the law, those communities are meant to receive 35% of funding for green energy and environmental improvement projects.

The Climate Action Council’s final plan to achieve all those overall goals is due by January 2023. The Council is a 22-member committee co-chaired by Doreen Harris, president and CEO of New York State Energy Research and Development Authority (NYSERDA), and Basil Seggos, commissioner of the state Department of Environmental Conservation. Members on the committee include heads of state agencies, environmental advocates, and experts. Once the Council approves its final plan, it will be submitted to the governor and the state Legislature, and will inform major state policy, legislative, and budgetary decisions.

Rohit Aggarwala, New York City’s chief climate officer and commissioner of the Department of Environmental Protection, stressed that any final plan adopted by the CAC “must embrace the interdependency” between the city’s and state’s respective climate agendas. As he noted, the city accounts for 43% of the state’s population, 50% of its economy, more than 50% of its taxes, 59% of its disadvantaged communities, and about 25% of its greenhouse gas emissions.

Aggarwala cautioned against the state taking actions similar to the past where the city has been punished either through funding formulas that advantage smaller communities, or funding that punishes the city for imposing mandates or ignoring building types and ownership structures prevalent in the city.

He suggested several ways the state could aid the city, including state funding to implement Local Law 97, which places emissions limits on the city’s biggest buildings, helping turn power plants into green energy hubs, and prioritizing electrification of vehicles in the areas with the most ambient air pollution. “The city and state will succeed together. We have no choice but to work together,” he said.

Kizzy Charles-Guzman, executive director of the Mayor's Office of Climate and Environmental Justice, reiterated the need for state support to help decarbonize the city’s buildings. Though Local Law 97 targets the biggest polluters in the city, Charles-Guzman said, “We want to partner with the state to ensure that all buildings including one- to four-family homes have financial support and assistance to decarbonize, achieve energy efficiency, improve air quality, and improve resiliency.”

Charles-Guzman also urged the Climate Action Council to ensure geographic equity in distributing green investments to disadvantaged communities and to focus on mitigating cost increases for customers in the transition towards green energy.

Louise Yeung, the first chief climate officer at the New York City Comptroller’s office, testified to the broader consequences of climate change. “Our office takes a long-term view in managing risks facing the city, including the climate risks that threaten our financial, physical, and social future,” she said. Yeung called for a moratorium on new fossil fuel infrastructure, retiring the Ravenswood and Astoria gas power plants and turning them to clean energy hubs, major investments in renewable energy, incentivizing electric vehicle adoption, reducing waste export, and prioritizing electrification and decarbonisation for low-income and environmental justice communities while maintaining energy affordability.

“These mitigation strategies are estimated to save $90 to $120 billion compared to the cost of inaction and create 198,000 jobs,” she said. “We cannot squander this moment.”

In submitted testimony to the Climate Action Council, Brooklyn Borough President Reynoso addressed the impact that the final plan will have on Brooklyn’s infrastructure, transportation, buildings, waste, and land use.

“Brooklyn is well-positioned to lead the city in building the green economy,” he said, pointing, for example, to the offshore wind hub planned for the South Brooklyn Marine Terminal in Sunset Park and community efforts to oppose National Grid’s North Brooklyn Pipeline.

He did raise concerns that the draft scoping plan puts far too much emphasis on electrifying single-occupancy vehicles, instead of encouraging people to use public transit instead. “The most important thing that New York State can do to make New York City more sustainable is to fix the MTA,” he said, stressing the need to implement congestion pricing and to find sustainable revenue streams to make subways and buses “clean, efficient, reliable, accessible, and affordable.”

Queens Borough President Richards was not present to testify but said in a statement to Gotham Gazette, “From Superstorm Sandy and Hurricane Ida to Asthma Alley in Astoria, Queens is far too familiar with the devastating impacts climate change and extreme weather can unleash. It has never been more critical to do all we can as a city and state to stem the tide of the climate crisis. I stand with our frontline communities and all our clean energy partners to call on our state to put forth the efficient roadmap possible in our push to eliminate our dependence on fossil fuels and invest in energy equity.”

Katherine Brezler, strategic advisor to Richards who testified on his behalf, also emphasized the need to focus on disadvantaged communities, particularly in Queens where higher pollution has been linked to worse health outcomes. “In Queens, this means our neighbors’ lives could be spared because we chose to slow the catastrophic impacts of climate change,” she said.

But she also stressed the importance of investing in flood mitigation strategies, pointing to the devastating impact that Hurricane Ida had on the borough last year as inland neighborhoods flooded and several people died in their homes.

Public Advocate Williams, in his testimony, echoed those who came before him. “We must begin the difficult, and hopefully shared pain, work of transitioning away from fossil fuels today,” he said.

“The CLCPA can be a monumental step forward in our city but first must be fully funded and enforced. Communities cannot be left to fend for themselves amid the most dire consequences of climate change,” he added.

Williams specifically pushed for the state to pass the All-Electric Buildings Act, which would ban new gas and oil hookups in building construction across the state starting in 2024 — similar to the law passed in New York City. Governor Hochul proposed a version of the bill in her executive budget, which would have gone into effect in 2027, which was the core of disagreement with the Legislature.

Echoing Williams’ demands, some advocates have called for the state to put an initial $15 billion into renewable energy infrastructure, and have pushed for raising at least $10 billion with higher taxes on the wealthy to fund housing, mass transit, and green energy projects. Some state funding could also come from the $4.2 billion Clean Water, Clean Air, Green Jobs Environmental Bond Act, which is headed to a ballot referendum in November.

Advocates are also pushing for a slew of state legislation, some of which came up in testimony Tuesday, including the Climate and Community Investment Act, a moratorium on cryptocurrency mining, the Clean Futures Act, the Cumulative Impacts Act, the Fossil Fuel Subsidy Elimination Act, the New York Build Public Renewables Act, the Renewable Capitol Act, and the Teachers’ Fossil Fuel Divestment Act.

At the hearing, Williams also repeatedly stressed that the plan must create a “just transition” to a green economy and he pointed to concerns raised by labor unions about that energy transition.

Utility workers, employed by National Grid in Brooklyn and Queens, affiliated with the Transport Workers Union Local 101 rallied on Tuesday outside the site of the public hearing, expressing worries that the climate plan will lead to thousands of them losing their jobs while significantly raising costs for homeowners and residents.

“This draft plan would be a job killing disaster and also will zap residents and homeowners with sky-high energy costs,” said TWU Local 101 President Constance Bradley, in a statement. “It would wipe out thousands of good union jobs that enable blue-collar families to put food on the table, pay the rent, and send their kids to college. There is a better way.”

TWU has instead supported a fossil-free energy plan created by National Grid that would replace the use of natural gas with Renewable Natural Gas from landfills, farms, waste-water facilities, and green hydrogen, produced by solar and wind farms, according to a TWU Local 11 press release. According to the plan, National Grid aims to be fossil-free by 2050.

“It’s now or never time for New York Democrats,” said TWU International President John Samuelsen, in a statement. “Are you going to be the party protecting the economic security of workers as we transition to a greener world, or are you the party of environmental elites?”

At least one advocate said those arguments by organized labor were distracting from real solutions. “We cannot allow the corporations to continue to inculcate or bamboozle our family in labor with false solutions like green hydrogen, blue hydrogen, carbon capture sequestration. Those are not the jobs of the future,” said Anthony Rogers-Wright, director of environmental justice for New York Lawyers for the Public Interest and a steering committee member of NY Renews. He said the Climate Action Council should instead recommend passage of the Climate and Community Investment Act, which would create a new state authority to invest in major green energy projects, housing retrofits, and green vehicles, and would specifically protect workers currently in the fossil fuel industry. “There will never be climate justice without justice for our workers. We don’t leave workers behind,” he said.

Elizabeth Yeampierre, executive director of UPROSE, said that investments in disadvantaged communities should be at least 40% of spending under the new climate plan.

“The CLCPA must serve as a model across public and private sectors and prioritize moving a minimum of 40% direct investments to frontline communities- those most impacted, but least responsible for climate change,” Yeampierre said. “40% investments is the baseline and not the ceiling in order to protect communities and build equitable systems that allow communities to survive and thrive in the face of disasters.”

Many advocates have been critical of the pace of progress that New York has made in tackling the increasing urgency of the climate crisis. As Alice Hu, a climate campaigner for New York Communities for Change, pointed out in her testimony, the state’s emissions have likely increased in recent years with the shutdown of the Indian Point nuclear power plant with insufficient renewable energy to replace it, and as more people take to cars as mass transit systems are seeing underinvestment.