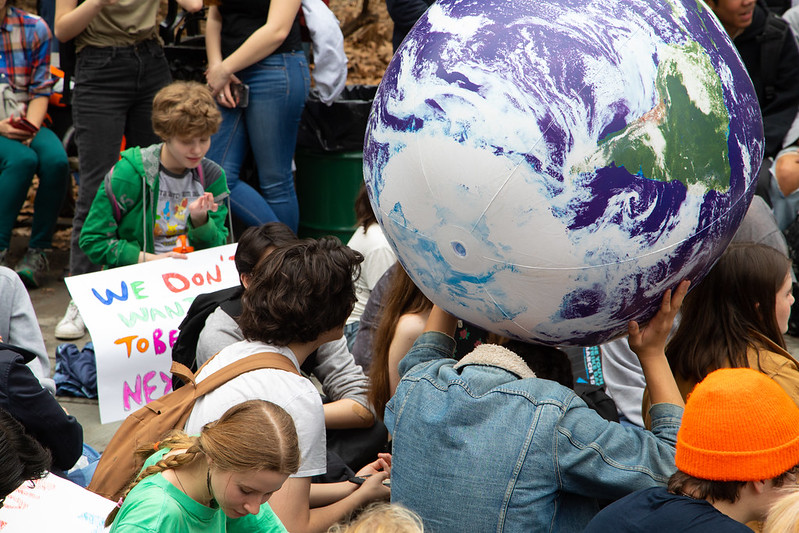 With the global climate crisis heading to the point of no return, dozens of climate activist groups are rallying ahead of Earth Day, April 22, calling on Governor Kathy Hochul and the state Legislature to pass a a raft of bills they say are crucial to the local and global effort to fight climate change, global warming, and their ill effects.

The bills include efforts to cut carbon emissions, build green infrastructure, reduce the state’s reliance on fossil fuels, prevent harmful cryptocurrency mining, and create tens of thousands of green jobs, among other measures. Advocates and like-minded elected officials argue that the measures are necessary to mitigate and adapt to climate change, and as part of New York’s implementation of the landmark 2019 Climate Leadership and Community Protection Act (CLCPA), which mandates ambitious carbon emission reduction targets and transition toward widespread renewable energy use in New York.

The latest report of the United Nations Intergovernmental Panel on Climate Change (IPCC) released earlier this month warned that the global community must take immediate action to forestall the continuing warming of the planet to avoid disastrous consequences. “It’s now or never, if we want to limit global warming to 1.5°C (2.7°F),” said Jim Skea, co-chair of the IPCC Working Group III, in a statement accompanying the report’s release. “Without immediate and deep emissions reductions across all sectors, it will be impossible.”

In a Tuesday appearance on the Max Politics podcast, Daniel Zarrilli, special advisor on Climate & Sustainability at Columbia University and former New York City Chief Climate Policy Advisor, said that New York’s leaders need to move with more urgency in combating the climate crisis. “There's a clear sense that we all need to be moving faster,” he said. “And for all of the leadership that New York City and New York State, California, others are showing, we need more of it and we need it to go faster."

“Both the state and the city have adopted really ambitious laws,” said Julie Tighe, president of the New York League of Conservation Voters, on the podcast. “They need to go about implementing them now."

New York State Efforts
In New York, activists say state legislative action has not been sufficient, prompting a flurry of activity by the Climate Can’t Wait coalition, made up of 43 groups from across the state including Food & Water Watch, New York Communities for Change, New York Lawyers for the Public Interest, NYPIRG, New York Youth Climate Leaders, PAUSE, People's Climate Movement-NY, Sunrise Movement NYC, and WE ACT for Environmental Justice,  among others.

Members of the coalition began a bike trek to Albany on Saturday, starting off from Manhattan and making stops in Yonkers, Peekskill, Beacon, Newburgh, Poughkeepsie, and New Paltz. On Thursday, they will cross the Hudson region and arrive in the state capital on Friday, where other activists will join them to march and rally outside the Capitol building.

The coalition is demanding action on a series of bills that have yet to pass and implementation of measures that have already been approved by the state.

Among the bills are the All Electric Building Act, which would ban new gas and oil hookups in new buildings across the state starting in 2024. Though Governor Hochul had made a similar proposal in her executive budget, her ban would begin in 2027, a crucial difference from the Legislature’s proposal, which led to no agreement in the state budget adopted earlier this month.

There are several other proposals on their agenda:

-To “fully” fund implementation of the CLCPA, activists are calling for a $15 billion investment to expedite the state’s path to a fully renewable energy economy.

Such revenue-related measures would likely now have to be part of the next state budget, due by April 1, 2023. But the adopted budget for the fiscal year that just began includes a number of climate-related investments, as well as a $4.2 billion environmental bond act that will go for voter approval or disapproval on the fall ballot and would fund a number of climate-related priorities.

Activists have called for other proposals that could help implement the goals of the CLCPA, including higher taxes on the richest New Yorkers and the Climate and Community Investment Act, among others.

-The Climate and Community Investment Act would create a new state authority, funded by fines on corporate polluters, to invest in major green energy projects, public housing retrofits and green vehicles. The bill would also provide for grants to community groups for climate resiliency and mitigation projects and prioritizes investments in disadvantaged communities, among other provisions.

-Raising $10 billion through taxes on uber wealthy New Yorkers to fund housing, mass transit, green energy and other infrastructure projects while creating thousands of jobs and investing in low-income communities of color.

-The Clean Futures Act, which would prohibit the development of new major electric generating facilities that would be powered in any way by fossil fuels.

-A proposed three-year moratorium on cryptocurrency mining, which uses massive amounts of energy.

-A proposal to require the state’s Public Service Commission to undertake energy efficiency measures for utilities, to encourage the efficient use of energy and to promote hiring and job training of priority populations.

-The Fossil Fuel Subsidy Elimination Act, which would repeal more than $330 million in state tax exemptions for the fossil fuel industry.

- The New York Build Public Renewables Act, which requires the New York Power Authority to provide only renewable energy and power to customers. It would allow the NYPA to own and build new renewable energy infrastructure, and to provide renewable energy to all state and municipal properties by 2025. It also bans for-profit Energy Service Companies (ESCOs), setting the stage for a 100% publicly owned energy system.

-The Renewable Capitol Act, which requires the use of renewable energy systems for state buildings in the Empire State Plaza complex, including the State Capitol.

“New York has the unique opportunity to lead the nation in creating a healthy and abundant future in which all of us - not just the powerful billionaires and corporations - can thrive,” said Veekas Ashoka, an organizer with Sunrise NYC, in a statement. “The Climate Can’t Wait bill package has given the Governor and Legislature that opportunity to create that hopeful future for us all. It’s our job to demand that they take it.”

The governor and other elected officials have taken a few concrete, and symbolic, measures before and during Earth Week, which culminates with Earth Day on Friday, April 22.

The $220 billion state budget approved earlier this month included significant allocations for the state’s climate goals. That includes a $500 investment in offshore wind energy infrastructure and a $400 million Environmental Protection Fund. It also includes the $4.2 billion Clean Water, Clean Air, Green Jobs Environmental Bond Act, set for a ballot referendum this fall during the general election. If approved, $1.5 billion of that amount will be set aside for climate change mitigation projects, including $500 million for electric school buses.

Last week, the governor announced that the State Public Service Commission had approved contracts for two new transmission lines that will deliver renewable solar, wind, and hydroelectric power from upstate New York and Canada to New York City, a key step hailed by government officials and advocates as essential progress toward the state’s energy transition.

“New York continues to lead the nation with innovative green energy initiatives and has been an example to the rest of the world how to confront the perils of climate change, the existential threat of our time,” Hochul said in a statement at the time. The same day, she also announced that the PSC had approved a new framework to expand the state’s solar energy network and achieve at least 10 gigawatts of distributed solar energy by 2030.

On Tuesday, Hochul announced that the new one-acre rooftop farm at the Javits Center in the city, which was completed last year, had joined the New York State Grown & Certified program and will produce up to 40,000 pounds of fruits, vegetables, and greens annually. “As we celebrate Earth Week, it’s important to reflect on our existential fight against climate change and continue our pursuit of historic, innovative solutions to bring us closer to a cleaner, greener New York State,” she said.

New York City Efforts
One of the earlier moves Mayor Eric Adams made was to create the Mayor’s Office of Climate and Environmental Justice, consolidating several offices that previously existed under the leadership of Rohit Aggarwala, the new chief climate officer and commissioner of the Department of Environmental Protection.

“I think the mayor has got a great team and can do amazing things,” said Zarrilli, a top climate policy official under Mayors Bloomberg and de Blasio, on the Max Politics podcast. “The big question is how he's going to direct them and where he's going to set them loose and spend the political capital to deliver big transformative change and I'm excited to see where they go.”

This week, city elected officials have also been making a series of Earth Week announcements while activists have been busy with organizing efforts.

On Wednesday, Adams and newly-appointed Department of Sanitation Commissioner Jessica Tisch launched a containerized waste bins pilot project in Times Square. “Environmental justice begins at the street level, and it starts now,” Adams said in a statement. “Clean streets are vital to vibrant neighborhoods and to New York City’s economic comeback. We need to stop dodging black garbage bags and instead fund and test container models throughout the city that will make our streets cleaner and more inviting for both New Yorkers and visitors.”

On Thursday, City Council Members, including Pierina Sanchez and Lincoln Resler, are holding a press conference outside City Hall with Louise Yeung, Chief Climate Officer at Comptroller Lander’s office, and climate activists and experts from the New York Public Interest Research Group, Food & Water Watch, and New York Communities for Change. They are calling on Mayor Adams to strongly commit to implementing and enforcing the city’s Green New Deal Law, which puts strict limits on emissions from the city’s largest buildings starting in 2024. Questions have been raised about whether the city will be ready to implement the landmark law and whether Adams in particular is on board.

Also on Thursday, advocacy groups led by Riders Alliance and elected officials are set to rally at City Hall to call on Mayor Adams to support the City Council’s request for $3.1 billion in additional funding for the “streets master plan.” Under the Council’s proposal, the funding would help create, over five years, 500 miles of new protected bus-only lanes, 40 miles of car-free busways, 500 miles of protected bike lanes, and 38 million square feet of open pedestrian space. Also participating in the rally will be members of Transportation Alternatives, the New York League of Conservation Voters, TWU Local 100, and other groups.

Last month, Department of Transportation Commissioner Ydanis Rodriguez announced that the city would hold its largest ever car-free Earth Day celebration on Saturday, April 23. The initiative, which was first launched in 2016, will bring together 150 partners including elected officials, city agencies, nonprofit groups, artists, musicians, and more for programs across the city. According to DOT, it will  connect more than 100 Open Streets, 22 plazas, and access more than 1,000 miles of the city's bike lane network.

“Earth Day is when we can all commit to protecting our Earth – and one way we can do that is by repurposing our roadways,” Rodriguez said in a statement. “Car-Free Earth Day is a growing tradition that allows New York City’s car-free streets to come alive. The last two years – of Open Streets, Open Restaurants, the surge in cycling and so much more -- have only made us appreciate even more how much better we must treat Mother Earth -- and a day without cars allows us to envision a more sustainable world for more than just one day.”