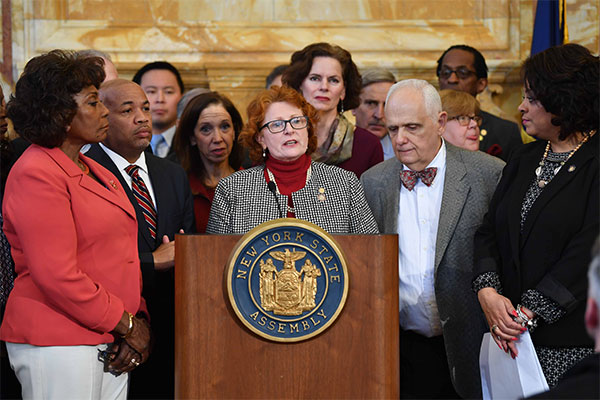 Assemblymember Jo Anne Simon, who represents Brooklyn’s 52nd district, said her experience working with the communities in her district and the surrounding neighborhoods will be her path to victory in the crowded race to represent the new 10th congressional district of New York encompassing Lower Manhattan and parts of Brooklyn.

“I have been like them in the trenches,” Simon said of her neighbors during a recent appearance on Gotham Gazette’s Max Politics podcast. “I've been that person in the auditorium looking to get my voice heard with officialdom, whether it's an agency or elected officials. And so I know what people's concerns are, and I am always there listening and working with people.”

During the interview, Simon told Gotham Gazette editor Ben Max, the podcast host, that she decided to enter the race after reviewing the new congressional and State Senate maps, created amid a chaotic redistricting process, in which her Assembly district was drawn entirely into the new 10th congressional district. She added that the congressional race was left open once Rep. Jerry Nadler, who represents the current 10th district, instead launched a campaign for the new 12th district after his West Side base had been drawn into its boundaries.

“I am an issue person,” said Simon, who represents parts of downtown Brooklyn that vote in especially heavy numbers and came out for her in her unsuccessful 2021 bid for Brooklyn borough president. “I’ve always been about the intersection of our neighborhoods and our communities, and working within those communities to ensure that their voices are heard. And that Congress was a new way for me to serve those communities and the additional communities in Lower Manhattan.”

When asked why she decided to run for Congress and potentially leave the Assembly (because of this year’s split primaries, she can run for reelection if she loses the congressional primary), Simon said most of the immediate challenges that New Yorkers face are a result of federal policy, federal funding, and federal rights.

She pointed to funding for infrastructure, including the Brooklyn-Queens Expressway (BQE) and the Brooklyn and Manhattan bridges (which both start/end in her Assembly district), as an especially important issue for the residents she serves.

Simon also mentioned that her district had to fight for federal funding for the Gowanus Superfund Site, as designated by the U.S. Environmental Protection Agency, and how housing in the district has become unaffordable due to the lack of support for public housing and housing programs from the federal government.

“Because I have that experience in working with communities, city, state, and the federal government, for me, this was a natural move to sort of connect those dots in a fundamentally different way than you can from a single assembly district,” Simon said.

Since being elected to the New York State Assembly, Simon said her top accomplishments have been her efforts in codifying Roe v. Wade abortions protections into state law, especially key given the recent Supreme Court decision striking down Roe, and passing the first “red flag” gun control law in New York, which was recently tightened by the governor and Legislature.

Simon said the state should have better implemented her red flag law since it was signed in 2019 by then-Governor Andrew Cuomo, including through more public education. Before the mass shooting in Buffalo in May by a young man who had raised red flags but was not ordered to avoid guns, Simon said she had been talking with state senators, the governor’s office, and the Assembly speaker’s office about the need for a massive public education campaign, including the involvement of law enforcement, around extreme risk protection orders.

“It’s not just mass shootings, it’s also other interpersonal violence, and it’s also suicide,” Simon said about the types of violence the law is meant to prevent.

She acknowledged issues with implementing the law, given counties throughout New York have different approaches to public education and enforcement, and said that it is really up to the gubernatorial administration and localities to ensure implementation. She cited other such issues, namely with part of the New York Secure Ammunition and Firearms Enforcement (SAFE) Act, which promised a registry for handgun bullets. Cuomo and Republican leadership in the State Senate, which opposed the database, had developed a memorandum of understanding to not go forward with the ammunition database, an agreement that was recently canceled by Governor Kathy Hochul, a Democrat who is working with two Democratic supermajorities in the Legislature.

“Sometimes it's the public's interest, sometimes it's the Legislature, which doesn’t administer laws or implement laws ourselves, and the agencies may or may not be as collaborative with the Legislature as we would like in some cases,” said Simon, who did not directly address the question about why the Legislature had not performed more oversight of the landmark red flag law. “But also, sometimes it’s from the administration’s actions as well, and that that issue with the database has been a big one — it is one we've been concerned about for quite some time.”

Simon, who is a disability rights activist and attorney, also highlighted her work in fighting for people with disabilities, including passing legislation that allows people with intellectual and developmental disabilities to make their own decisions, and requiring school districts to use the words dyslexia, dyscalculia, and dysgraphia to address the needs of students with reading disabilities.

She also pointed to her bill, which passed in the Assembly but not the Senate, related to preventing the zoonotic transfer of viruses.

“We have a lot of these rare species that are getting imported into the country illegally, or they're getting imported into the country and it's not yet illegal,” Simon said. “We want to make sure they're not coming into New York — we don't want to feed that crisis. As more states get on board with doing this kind of legislation, then it will bubble up and become easier for passage at the federal level to really look at how climate is impacting our health beyond the ways that we all know about, which is pulmonary disease and asthma.”

If elected to represent the 10th congressional district, Simon said her top priority will be the climate, noting her support of the Green New Deal and the Build Back Better plan that includes major climate action. She said climate relates to other pressing issues in the district, including the lack of support from the federal government to public housing, and called for $40 billion in funding for the New York City Housing Authority (NYCHA).

She also emphasized the need to codify the role of the EPA in regulating greenhouse gas emissions, which was limited by the Supreme Court in a controversial June decision.

“Climate is affecting all of us in all of our areas of life, and so I think we have to really sort of look at that as part of a linchpin to the way that people live our lives,” Simon said. “All of the flooding, all of the fires out west, all of this is really about climate change and the failure of the federal government to have pursued that, and that is often something that has been a very divisive issue politically.”

Simon also said she would work to pass the Women's Health Protection Act, which would protect the right to access abortion care throughout the United States, and look at other ways to protect people who are seeking care in states where abortion is banned or restricted, including using Indigenous lands and medical ships.

Asked about how to bring in revenue for NYCHA outside of tens of billions of dollars in federal funding, Simon said the city does not need to privatize public housing, noting how many tenants misunderstand that the recently-passed NYCHA Preservation Trust ensures public housing is still going to be publicly-owned. She said infill housing has been proposed as a solution to the affordable housing crisis, but she believes it is unfeasible given the design of many NYCHA developments. Simon also said she is opposed to the sale of air rights, arguing that big developers can buy them and decide to not consult the community on the ground.

“We need to look really at what it is we mean by these things and how they could come back to end up furthering displacement, for example, in the unaffordability of neighborhoods,” Simon said. “We don't look at that seriously enough, in the beginning, when we're first talking about these ideas, and we need to do that much more.”

Asked about whether it is time for the Rikers Island jail complex to be put into federal receivership, Simon said the jail should have federal oversight and “it’s moving in that direction,” despite a federal judge temporarily allowing Mayor Eric Adams to have control of the complex until November.

On the partisan landscape and slim Democratic majorities in Congress heading to the November midterm elections, Simon said the right has a “very effective echo chamber,” which she noted has been effective recently in appealing to some immigrant groups, particularly Asian immigrants, who think of oppressive regimes when they hear socialism, not the type of European socialism that many progressive Democrats are pitching. She said the language used by Democrats is misunderstood by certain groups of people, and the party is for better or worse more likely to have internal conversations more publicly.

Simon added that the left being seen as “too left” is often a result of media coverage and Republican messaging, which she argues deliberately misconstrues and miscommunicates the facts, giving the example of mail-in ballots during the 2020 presidential election.

“What we need to do is really respect and honor everybody's views in the Democratic Party,” Simon said. “We need to listen to each other. And I think we have so much more in common than not.”

Asked about her path to victory in the new 10th congressional district, Simon pointed to high voter turnout in her overlapping 52nd Assembly District, and said she has received the most votes of any Assembly candidate across the state in her last three elections. But she also pointed to relationships with residents outside of her district, mentioning that when she hosts “Java with Jo Anne” gatherings to talk with constituents, outside residents often come with questions about their own communities, which usually face similar challenges.

On winning over Manhattan voters, Simon said that Manhattan and Brooklyn residents are concerned about similar issues, such as resiliency, affordable housing and displacement, and that her work in Brooklyn and understanding of the 10th district’s needs have resonated with neighborhoods in both boroughs. She lauded her recent endorsement from the Downtown Independent Democrats, the largest Democratic club in Lower Manhattan.

“Whenever there's a big project being done, people are inevitably displaced,” Simon said. “How do we counter that? How do we ensure that people are not pushed out of the neighborhoods that they built their lives and their homes and raised their families there? That young people can afford to live in the communities that they were raised in? That is something that we need to work together on.”

“I have a message that is resonating with people in both boroughs,” she said, “and that is my path to victory.”

[LISTEN to the full conversation: Max Politics Podcast: Jo Anne Simon on Running for Congress in the New NY-10]