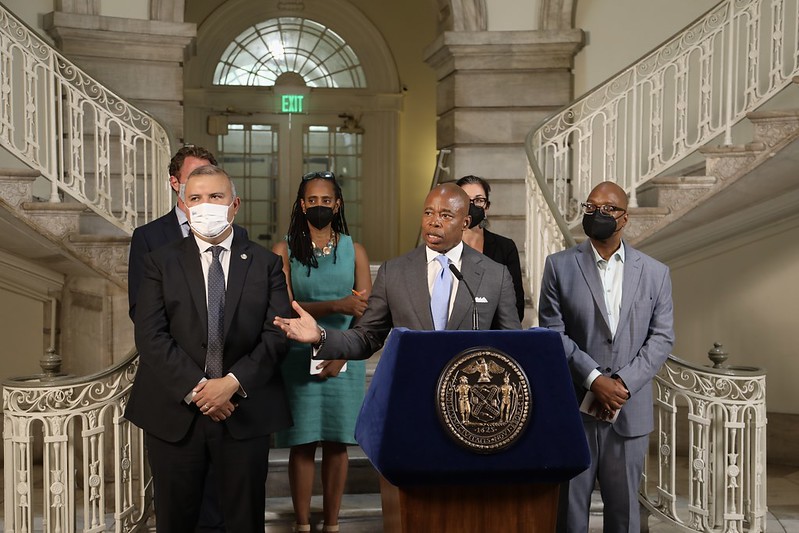 Earlier this year, Mayor Eric Adams pleaded with the federal government for $500 million in emergency funding to address the “humanitarian crisis” of thousands of migrant asylum seekers who have arrived in New York City in the last few months. But despite the clear health and safety risk to thousands of people, who have the right to shelter under New York law, the crisis is not the type of emergency – like the COVID-19 pandemic or Hurricane Sandy, for instance – that would easily qualify for federal emergency funds.

In a typical year, New York City projects spending somewhere between $30-60 million to respond to emergency incidents of varying scale, from structural fires and construction accidents to hazardous material leaks, utility breakdowns, criminal incidents, and extreme weather events. But the last few years have been anything but typical and the city’s emergency spending ballooned amid COVID-19 devastation and ongoing effects.

New York City is expected to receive as much as $26 billion in federal relief funds through fiscal year 2026 through the various pandemic relief programs, stimulus bills, and reimbursements from the Federal Emergency Management Agency (FEMA), according to New York City Comptroller Brad Lander’s office. Those funds have been and will be distributed across city government and its many agencies for purposes that range from the emergency health response to the pandemic to filling revenue shortfalls, covering essential services, and spurring recovery.

Of the various pots, there is little flexibility in how the city can spend emergency funds. FEMA, for instance, reimburses costs that have already been incurred for qualifying purposes like response to the pandemic or the effects of hurricanes that hit the city. The series of federal aid and stimulus bills also awarded funds for purposes like education that must flow through the Department of Education, but with some city discretion in programmatic, supply, and other expenditures. Where the city did have flexible funds to spend, much of it has already been allocated, leaving a limited amount for the next few years.

“All three of those directed recovery funds to the city and the state and other places for different things with different levels of flexibility,” said Ana Champeny, vice president for research at Citizens Budget Commission, a nonprofit fiscal watchdog.

The New York City budget adopted in June 2020 for the 2021 fiscal year only allocated less than $29 million to the city’s Office of Emergency Management, but by the end of that fiscal year, NYCEM’s spending was as high as $557 million. The next budget approved in June 2021, for the 2022 fiscal year, allocated $54.2 million to NYCEM, though actual spending would later be revised to almost $780 million. The increase in those budgets was paid from federal funds.

Similarly, the fiscal year 2023 budget passed in June of this year allocated only $60 million to the Office of Emergency Management, which has quickly been strained as it responds to the influx of asylum seekers in the city and even sent teams to help Puerto Rico and Florida in the aftermath of recent hurricanes.

Mayor Adams has repeatedly insisted that the influx of asylum seekers constitutes exceptional circumstances that require not just local efforts but a national emergency response. “This is not an everyday homelessness crisis, but a humanitarian crisis that requires a different approach,” he said on September 22, when he announced that the city would set up “Humanitarian Emergency Response and Relief Centers” to provide immediate services to the migrants. As the New York Post reported, the mayor’s administration had quietly requested the White House for $500 million to cover its emergency response.

On September 27, after the mayor returned from Puerto Rico and the Dominican Republic to survey the effects of Hurricane Fiona, he justified the funding request. “We requested money to deal with the crisis. That's what we did. And that's what we are going to continue to do,” he said. “It's expensive and we should not have to trade off dealing with the needs of New Yorkers and dealing with the needs of migrants and asylum seekers. That is not fair to New Yorkers…The national government has a responsibility in assisting in this national problem.”

Comptroller Lander has similarly called on the federal and state governments to do their fair share. “New York State and the Federal government must not continue to take advantage of the City’s expeditious action; each should step up immediately to bear its share of the costs,” Lander said in a statement as he approved emergency contracting rules for the Office of Emergency Management to respond to the crisis. In an interview with Bloomberg News, Lander estimated that sheltering the migrants could cost between $500 million to $1 billion in one year alone.

SLFRF Funding
The city is due to receive $5.88 billion from the SLFRF fund, half of which was delivered in May and June last year. The fund allowed the city the latitude to spend the money on four broad categories: responding to the public health emergency or its negative economic impacts; providing premium pay to essential workers; providing necessary city services impacted by a loss in revenue; and investing in infrastructure like water, sewer, or broadband internet.

“That's what we call, not unrestricted, but flexible spending,” Champeny said. “That’s what was used to fund the Cleanup Corps, a lot of small business incentives, and other things like that. It was also used just for fiscal relief…to fund essential services instead of city funds.”

According to estimates from the City Comptroller’s office, in an August 2021 report to the federal government, the city had already allocated almost all the funds to be used during Fiscal Years 2021-2025, though how much has been spent is harder to track since the allocations are not attributed in budget documents.

A recently-released analysis by State Comptroller Tom DiNapoli’s office found that the city had “obligated” about $2.5 billion, or 86%, of the $2.9 billion in SLFRF funds it received through March 2022. “That is among the fastest rates among the nation’s 10 largest cities and is higher than the average for the more than 14,000 local government recipients (55.6%) reviewed,” the report states.

More than half of that allocation went to revenue replacement, largely for salaries and wages at the Department of Education and the city’s four uniformed agencies (Corrections, Fire, Police, and Sanitation) as well as towards waste collection and removal services. Another 27% went to businesses, nonprofits, households, and workers while 16% went to public health services.

An analysis of city data by Citizens Budget Commission showed a more detailed breakdown of the actual spending, which occurred through most of the 2022 fiscal year but not through the end (the final tally of that spending will likely be available this month in spending reports required by the Department of the Treasury after each quarter).

“It's not uncommon for actual spending at the end of the fiscal year to be below the budgeted or projected level, and for that money to get moved over in November,” Champeny said, referring to the city’s annual mid-fiscal-year budget update required each fall. “So what I would expect is that in the November modification, or at the end of October when we get the audited financials for the city, we’ll know what the actual [FY22] revenue is and what's the variance that can be moved over.”

Education Funding
Through the different stimulus packages – CARES, CRRSAA, and ARPA – the city was given almost $8 billion in federal pandemic relief for education, including $7.7 billion for the Department of Education and about $274 million for CUNY.

Education funding has been a particularly contentious issue in the city budget this year, with the Adams administration cutting roughly $469 million from individual school budgets based on falling student enrollment. The cuts caused widespread consternation among the City Council, which voted to approve the budget though members have said they were misled about the size of the cuts that would later be instituted by the Department of Education.

City Comptroller Lander has been among the leading voices arguing that the city has sufficient federal funds to restore those cuts (which would mimic actions taken during the end of the de Blasio administration). According to data from Lander’s office, the city has committed about $3.2 billion of the federal aid to the DOE, leaving the city another $4.5 billion that it must use by Fiscal Year 2025.

FEMA Funding
New York City was awarded nearly $8.2 billion in FEMA reimbursements for costs incurred in response to the pandemic.

According to a breakdown of FEMA awards, compiled by the city’s Independent Budget Office at Gotham Gazette’s request, the biggest expenditures include about $1.7 billion for the city to run vaccination centers, almost $1.3 billion for emergency sheltering, about $1.2 billion to support NYC Health + Hospitals, $930 million for the city’s Department of Citywide Administrative Services, and more than $503 million for personal protective equipment for NYC H+H.