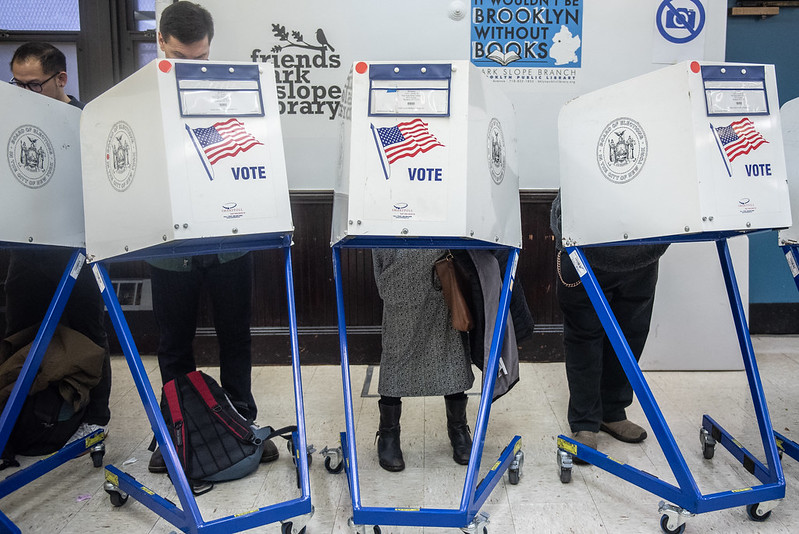 As the ballots turn this fall, New York City voters will decide the fates of three proposed amendments to the City Charter intended to lay the groundwork for greater racial equity.

Voters throughout the five boroughs are able to flip their ballots and vote "yes" or "no" on three separate questions to, respectively, codify a statement of equity and racial justice principles as a new preamble to the City Charter; establish a city government office dedicated to racial equity and require a regularly-updated racial justice plan from city government; and recalibrate the city's cost of living measurement.

If approved, the amendments will become part of the city's highest governing document and would, as designed, be used as the basis for policies aimed at reducing racial disparities in how New Yorkers are served by their government.

The measures were developed by the New York City Racial Justice Commission, created by then-Mayor Bill de Blasio in his last year in office after promising to address wholesale systemic racism of New York's past and present during protests against police brutality in 2020. The proposals now have the backing of Mayor Eric Adams, a fellow Democrat, who allocated $5 million to voter education around the referendums.

The three proposals appear on the New York City ballot as Questions 2, 3, and 4, coming after a statewide referendum on a $4.2 billion Environmental Bond Act. The bond act was passed by Governor Kathy Hochul and legislators in the state budget earlier this year but requires voter approval to move ahead.

What’s In Questions 2-4
Question 2 asks voters whether the preamble to the City Charter should be amended to include a statement of values to help create "a just and equitable city for all."

It outlines basic non-binding rights to a safe and healthy environment, affordable housing, culturally-tailored healthcare, and other supports and services. The amended preamble would also acknowledge the legacies of American slavery and the displacement of indigenous peoples, and the ongoing injustices of racial segregation, mass incarceration, and other forms of systemic oppression. The authors of the proposal envision the potential new language to serve as a guideline for policymakers.

Question 3, if approved, would create an "Office of Racial Equity" led by an appointee of the mayor and responsible for drafting and overseeing the implementation of a citywide racial equity plan every two years. The plan would be based on individual blueprints developed by city agencies with the purpose of closing gaps between white and Black New Yorkers, and other marginalized groups.

The office would establish metrics for city agencies to measure these gaps and identify priority neighborhoods in need of intervention. It would codify the Taskforce on Racial Inclusion and Equity, established by de Blasio in 2020 largely to address disparities revealed by the COVID-19 pandemic, and place it within the Office of Racial Equity.

In an effort at oversight and accountability, the amendment would also set-up a 15-member Commission on Racial Equity responsible for offering guidance to agencies and the new office on the racial equity plans, and to publicly track compliance with the planning process. Members of the commission would be appointed by the mayor, City Council, comptroller, and public advocate, with the chair appointed jointly by the mayor and Council.

Question 4 on the ballot, if approved, would require the city to design a "true cost of living" measurement that would provide a more accurate baseline than the federal poverty line, which has used the same criteria since the 1960s without accounting for regional variances.

The metric would take into account the costs of basic needs like food, housing, healthcare, and childcare, without considering public benefits and other forms of assistance toward an individual's income. The city would be required to report on the measure annually.

Raising Awareness About the Proposals
As statewide races narrow and the fate of Congress appears to rest on turnout in some New York swing districts, the ballot questions have garnered relatively little attention.

In addition to the city funding from the Adams administration, the referenda have the support of much of the City Council, the Public Advocate, and civil rights advocacy groups, who have held rallies and distributed materials.

Jennifer Jones Austin, the chair of the Racial Justice Commission appointed by de Blasio, has done a long series of interviews and public appearances to raise awareness about the proposals and advocate for their passage, and several other commissioners have also been active.

“Equity and justice go hand in hand and are key to building a prosperous city that serves all New Yorkers. And while our city has come a long way, we have more work to do,” Adams said in a statement in May when he announced the $5 million for public education. “I am proud to support the Racial Justice Commission’s efforts to ensure New Yorkers can fully participate in our democracy with full transparency. These three ballot initiatives intend to place racial equity at the heart of New York City government.”

On Friday, the Racial Justice Commission and 22 Democratic members of the City Council, including Speaker Adrienne Adams, held a "Day of Action," to raise awareness of the racial justice proposals.

“As early voting gets underway, it is critical that all voters who head to the polls remember to flip the ballot and cast their vote on the ballot proposals,” said Speaker Adams, a Queens Democrat, in a statement, while avoiding saying whether New Yorkers should approve them or not given she is not supposed to do electioneering from her government post. “I urge all New Yorkers to learn about the proposals and how they will impact our communities.

Arguments For and Against Questions 2-4
“In November, voters will decide on several ballot measures that address racial equity," said Council Member Nantasha Williams, a Queens Democrat and chair of the Council’s Committee on Civil and Human Rights. "We need to work together to ensure that these measures pass so that we can begin to make real progress toward creating a society where all voices are heard.”

"It is about time to address the barriers Black, Indigenous, Latinx, Asian, Pacific Islander, Middle Eastern, and all People of More Color in New York City face on a daily basis, as well as the additional barriers faced by LGBTQ+ and Disabled People of Color, antisemitism, islamophobia, just to name some," said Public Advocate Jumaane Williams in testimony at a City Council oversight hearing on the ballot questions, three days before polls opened for early voting. "If these proposals pass, we will be able to move towards an equitable and just city."

Spokespeople for the state's Democratic and Republican parties did not return requests for comment on the racial justice ballot measures (the Democratic Party has come out in support of the Environmental Bond Act, the other question on the ballot). A spokesperson for the Conservative Party did not comment on the party's position and told Gotham Gazette it had not issued any statements on the racial justice measures (the party is against the Environmental Bond Act).

A smaller faction of conservative New York City elected officials and advocacy groups have come out against the proposals.

“With crime spiraling out of control, inflation at all-time highs, and the many other important issues plaguing this city, these ballot proposals are out-of-touch with the realities of what New Yorkers need the government to do," said Council Member Robert Holden, a Queens Democrat who often aligns with Republicans, in a statement to Gotham Gazette.

"Any idea from the worst mayor of all time, Bill de Blasio, must end up in the wastebin and be ignored,” Holden added.

Council Member Inna Vernikov, a Brooklyn Republican, recently told the New York Post that residents “don’t need more equity because equity is a Marxist lie and is the opposite of equality.”

The Council's Republican minority leader, Joe Borelli of Staten Island, declined to comment through a spokesperson.

A Republican-affiliated group called the Asian Wave Alliance is against all four ballot questions. In a statement, the group called the proposed Charter amendments "racially divisive" ideas that could be used as a "constitutional justification to discriminate against Asians."

The group said the "true cost of living" measure would "have the intended effect of giving more to those already on welfare and allowing more people to qualify for government funded housing, food and childcare. This measure aids in the redistribution of income and proliferates the financial burden on working and middle class taxpayers, and would trigger another wave of people exiting the City."

The measure would not create any direct or indirect right of action, commissioners have stressed, but could be used by policy-makers to adjust public benefits and services and factor into labor negotiations. The commission designed the proposals to be aspirational with neither the cost of living or statement of values intended to create commitments that could expose the city to lawsuits.

"The intention here is not to give everybody a right to a slice of the pie, if you will," Jones Austin told Gotham Gazette of the new preamble, during a recent podcast discussion, "but to set forth the value base, where New York City can actually govern and structure itself to ensure that everybody has real opportunity, has real access."

The language of the proposals was reviewed by the city Law Department, Jones Austin said. "It does not create a private right of action,” she said. “It does not."

Other long-term plans created by city policy-makers, through executive action or legislation, have been criticized for receiving fanfare when they are announced only to fade into obscurity. Asked how the proposed Office of Racial Equity would be held accountable for its equity plans, Jones Austin said in addition to the commission's oversight role the city comptroller would also be responsible for auditing the plan and city agencies "to ensure that they are beholden to it and are proving themselves responsible in administering it."

With New York City led by Democrats, many of whom profess commitments to the racial-justice principles contained in the referendums, some observers have asked why these proposals should be enshrined in the City Charter.

"Racism, and bias and inequity, have persisted from government to government, leadership to leadership, executive to executive,” Jones Austin said. “And so if we do not set a vision and then embed it in the laws of this city, then we're going to be beholden to where a particular Mayor may sit on an issue, or where legislators may sit. And we won't get ahead."

[Read: Arguments For and Against Question 1 on the 2022 New York Ballot, The $4.2 Billion Environmental Bond Act]