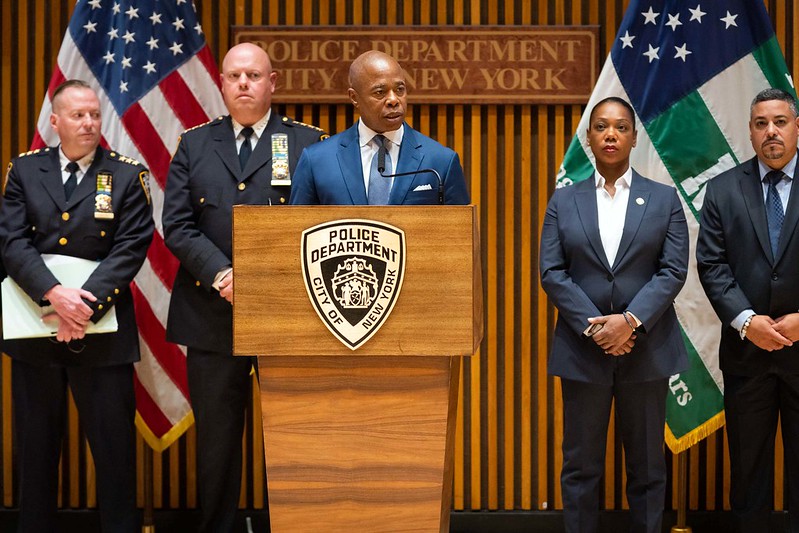 In his first nearly twelve months in office, Mayor Eric Adams has shown no signs of moving on a major campaign promise to publish a list of police officers the NYPD is watching for violent or otherwise unseemly behavior.

The promise was one of the more striking commitments the would-be mayor made to boost accountability within the ranks of the police force, a department of 34,000 uniformed officers. It was also one of the more tangible pledges Adams made to demonstrate his commitment to balancing police reform with his heavy focus on more aggressive law enforcement, part of Adams’ decades-long mix of pushing for fairer policing while remaining “conservative on crime,” as he has put it.

"As a former police officer who stood up against racism and corruption in the NYPD while simultaneously protecting our streets, I know how entrenched systemic bias is in the department," reads the police reform platform from Adams' 2021 campaign website, which has since been taken down (but preserved by Gotham Gazette). "The fastest way to true reform is to add as much diversity to the NYPD as fast as we can, while building trust through transparency."

"The NYPD keeps its own 'monitoring list' of cops with records of complaints and violent incidents. We will make those records more available to the public to be transparent and build trust," the platform reads.

But as of this month, the promise is still a work in progress, according to the mayor's office. As was a pledge the first-year Democratic mayor made in May to expedite the NYPD's often glacial disciplinary process.

"We're looking at the flowchart of how long it takes to remove someone who has violated their oath of office," Adams told CBS-2 TV’s Marcia Kramer in a May 25 interview. "We're making sure if an officer is doing something incorrect we right away rectify that behavior and at the same time, if it's something that is done that breaks the law or is not suitable to be [a] police officer, we are bringing them up on internal departmental charges," he said.

Fabien Levy, Adams' press secretary, said the administration was not ready to share more details on either the monitoring list or the expedited disciplinary system.

"Since day one, our public safety team has been focused on the NYPD disciplinary process with a particular focus on efficiency and transparency," Levy said in a statement when Gotham Gazette first inquired in October. "We have met, and continue to meet, with relevant stakeholders internally and externally, and our work, including with respect to the monitoring list and streamlining the disciplinary process, continues. We will share announcements when they are ready to be made."

At the time, Levy would not say which stakeholders the mayor has met with or what hurdles remain in place. On Thursday, December 15, he said by email that he had no progress updates to share.

But an hour later, Adams was asked about speeding up police discipline during an open question-and-answer session with reporters at City Hall.

The mayor said the disciplinary process was one of three focuses of an interagency working group, along with civilianizing parts of the NYPD and addressing failures of the department’s sex crimes unit. The group has presented its first set of recommendations and will come back with a second set, following feedback from the mayor, Adams said. The monitoring list was not mentioned in the question or answer.

Elected last year amid two years of pandemic-era crime increases, Adams has spent much of his first year in office focused on adding police patrols to the subways, enforcing low-level quality-of-life offenses, and cracking down on illegal guns. The mayor’s public remarks, in part spurred by the murder of two NYPD officers in his first month in office, have almost entirely consisted almost entirely of support for police and push-back against those who criticize them.

Adams' watchlist promise came amid an ongoing struggle over what police disciplinary records are accessible under the state's Freedom of Information Law. State lawmakers repealed Civil Rights Law 50-a, the statute used to shield those and other police personnel records from the public, in 2020. But police departments around the state, including the NYPD, have refused to publish many of them or sued to keep them under wraps.

The parameters of the mayor's promised watchlist are unclear. The NYPD's Early Intervention Program, which reviews officers for behavior that may lead to misconduct or negative public interactions, reports each quarter the number but not the names of officers under examination.

From April through June of this year (the second quarter), the department examined 208 uniformed officers for potential intervention, according to the last publicly available data. Of those, 156 were placed under review because prosecutors had declined to pursue their arrests, and 45 were due to allegations of biased policing. Only 14 officers, or about 7%, were recommended for non-punitive intervention after the review.

According to the department's Administrative Guide, intervention could entail training, mentoring, enhanced supervision, body-worn camera review, a conversation with leadership, or a change in assignment.

By comparison, the first quarter of 2022, from January to March, saw only 53 officers placed under review, and 26 of them – roughly half – were recommended for intervention.

But Dr. Keith Taylor, an adjunct professor at John Jay College of Criminal Justice who served in the NYPD's Internal Affairs Bureau from 1998 to 2001, said the department has been keeping watchlists long before the Early Intervention Program launched. Those lists could consist of substantiated and unsubstantiated complaints that go beyond the Early Intervention Program.

"I think it's appropriate to use a level of discretion and sensitivity in order to make certain that [officers'] ability to do their job is not negatively affected by allegations," Taylor told Gotham Gazette of Adams' proposal to publish a list of officers under internal watch. On the other hand, he said, "once an allegation has become an actual finding then it's important the agency has transparency to maintain the public's trust."

Civil rights advocates believe publishing a "monitoring list" would be the tip of the iceberg of true police accountability.

"What the public needs to know is not just the officers that the NYPD has flagged for monitoring but to know how many complaints are being filed against officers on the whole [and] what is happening with those complaints," said Michael Sisitzky, an assistant policy director at the New York Civil Liberties Union (NYCLU), in an interview. "From the outset, it was always an inadequate proposal but it did speak to the need to have more transparency.”

A lack of publicly available data also makes it hard to tell if there has been progress expediting the disciplinary process. One component of that is cases under the jurisdiction of the Civilian Complaint Review Board (CCRB), an agency responsible for investigating certain allegations of police misconduct, a fraction of all misconduct cases.

According to the Mayor's Management Report, the average time it took the CCRB to close cases grew in fiscal year 2022, which included the last six months of the de Blasio administration and first six months of Adams’ term. The time to complete a full investigation rose from an average of 378 days to 591 days, or 56%, "largely as an after-effect of the City’s COVID-19 precautions," the report states. For complaints against police officers that the CCRB substantiated, the average case length increased 42%, from 433 to 614 days. Substantiated CCRB cases then go to the NYPD with recommendations for discipline, in some cases to an administrative trial, in others directly to the police commissioner for a decision.

“Mayor Adams has consistently said that public safety and justice are the prerequisites to prosperity," Levy wrote in October. "As the FY22 MMR — which spans a period covering two mayoral administrations — notes, the increase in average times of investigation and substantiation largely stem from the city’s COVID-19 precautions. As we continue the reopening process, we remain committed to ensuring CCRB has the resources it needs to fulfill its mission under the Charter efficiently and effectively.”

In November, the administration released a plan to cut the CCRB's budget by 3%, part of a citywide plan to reduce budget gaps and after a previous 3% reduction earlier this year. The CCRB headcount is already below New York City Charter-mandated levels tied to the NYPD's uniformed headcount.

A CCRB spokesperson said the agency has improved the time it takes to complete investigations but could not say whether the NYPD has increased the speed with which it handles cases and metes out punishment – one of the biggest issues raised by families of people killed by police.

"The pandemic created significant roadblocks for the CCRB and other oversight entities to complete investigations on time, prompting a statewide executive order extending statute of limitations for CCRB cases, and other disciplinary investigations, through May 4, 2022," the CCRB spokesperson wrote in an email to Gotham Gazette. "Since closing those cases, the CCRB has already managed to reduce the time it takes to complete an investigation by 20% from Q1 to Q2 of this year."

According to the spokesperson, that is in part the result of new record-keeping methods and work between the CCRB and NYPD to improve the department's sharing of body-worn camera footage with CCRB investigators. The average time it takes the NYPD to fulfill a request for footage is now seven days, the spokesperson told Gotham Gazette, down from 42 business days in 2019. The agency's board members are also more frequently involved in case reviews, which further reduces completion time.

"Under Mayor Adams, disciplinary proceedings for NYPD officers remain inadequate in number and outcome and too far delayed, which harms the safety of our city and communities," said Loyda Colon, executive director of the Justice Committee, a group that advocates against police violence, and a member of the Communities United for Police Reform coalition.

"The mayor’s 'monitoring list' is a diversion attempt that promotes a false 'bad apples' narrative, when the whole policing system is rotten," Colon said in the statement.

The group has been pushing Police Commissioner Keechant Sewell and her predecessors to fire officers who killed Kawaski Trawick, a Black man with a history of mental health issues, in his home in 2019. In November, the department scheduled a disciplinary trial for Officers Brendan Thompson and Herbert Davis for April 24, 2023 – more than four years after Trawick was killed. Bronx District Attorney Darcel Clark previously declined to charge the two with a crime.

This past week, Sewell issued an internal memo to the department saying she reduced or dismissed the penalty recommendations of departmental trial judges in dozens of cases and planned to soon change the NYPD's disciplinary matrix, The New York Post reported.

The New York City Council passed a law in 2020 requiring the matrix under her predecessor, NYPD Commissioner Dermot Shea, after years of pressure from advocates. It was aimed at introducing the type of transparency and fairness into the disciplinary process that Adams' championed in his campaign promises and May interview. According to Sewell's memo, she believed many of the disciplinary recommendations were "manifestly unfair.”