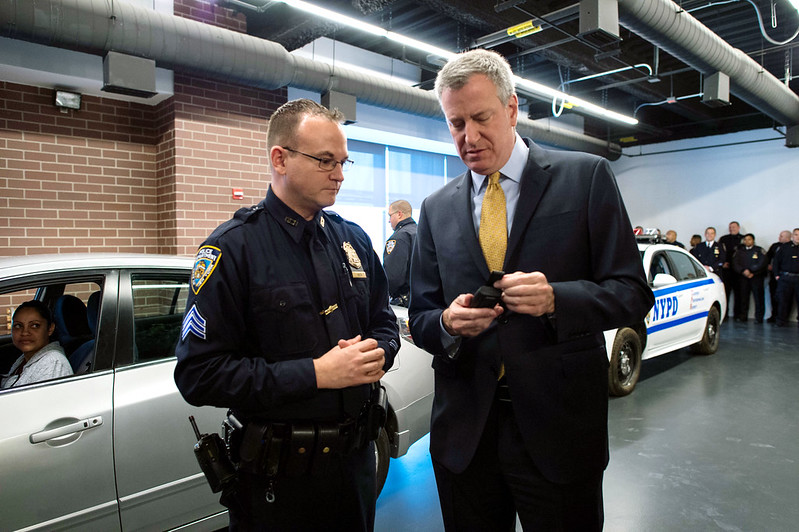 A new report by the city’s Civilian Complaint Review Board shows body-worn cameras have helped the police watchdog close hundreds of misconduct cases by substantially improving its ability to prove and disprove allegations. While CCRB officials believe the technology has become an indispensable tool, it has also presented new challenges for the agency as it seeks greater transparency from the NYPD.

The report, released Thursday, is the first of its kind on the New York City body camera program. It shows that the number of CCRB police misconduct cases that were closed with sufficient evidence, or “on the merits,” more than doubled from 37 percent to 76 percent when body-worn camera (BWC) footage was available. Now, with the number of requests skyrocketing, the CCRB is seeing more obstacles to obtaining relevant, unedited video and the rate of sharing footage  has slowed.

“BWC footage represents some of the most defining evidence in cases in which misconduct occurred and in cases in which the officer’s actions were within the boundaries of the law and the NYPD Patrol Guide,” wrote CCRB Chair Fred Davie in a letter accompanying the report.

From 2017 to 2019, the CCRB was able to prove an allegation was true and within its jurisdiction in 31 percent of completed investigations where BWC footage was available, compared with just 13 percent of investigations without BWC or other video. The board was able to exonerate complaints, meaning the allegation was found to be true but not a misconduct violation, in 30 percent of complaints with evidence from BWCs. Without BWCs, even with other forms of video evidence at hand, the exoneration rate is 20%.

“The NYPD has the largest deployment of body cameras in the nation with every officer outfitted and roughly 130,000 videos generated each week. These cameras shed light on our officers’ everyday encounters with New Yorkers and help to cultivate trust with the New Yorkers they are sworn to serve,” wrote NYPD spokesperson Devora Kaye in a statement responding to the new CCRB report.

The NYPD began piloting body-worn cameras in April 2017, with about 1,300 officers equipped by the end of that year. By August 2019, the end of the report’s study period, the NYPD had deployed 24,000 cameras to all patrol officers and certain special units. As the cameras proliferated, the number of BWC requests from the CCRB exploded: from 410 in the second quarter of 2018 to 1,134 during the same period in 2019, the report shows.

With the greater appetite for body camera footage and the promise of better evidence has come frustrations for the CCRB.

From May 2017 to June 2019, the CCRB reported receiving BWC video in only half of the roughly 4,000 cases it requested footage for. In the first half of 2019, the average length of time for the NYPD to respond to CCRB requests doubled. The CCRB also raised concerns about officers obstructing cameras or failing to record a complete interaction, as well as about the department’s training of officers to warn one another when their body cameras are recording.

The city’s ongoing body camera pilot was court-mandated in response to the NYPD’s racially-biased overuse of stop-and-frisk policing, which was found to be in violation of the Fourth and Fourteenth Amendments in 2013. The cameras are intended to provide a “contemporaneous, objective record” of stops and frisks both to protect civilians from police misconduct and officers from false accusations, wrote the judge in Floyd v. City of New York.

However, as Gotham Gazette first reported, the CCRB faces significant delays in receiving requested footage, which is often edited or fully denied, while prosecutors collecting evidence for trial receive unredacted footage virtually automatically and within a matter of hours. That revelation and others helped spur advocates and city officials to seek reforms to the NYPD’s video-sharing practices, which culminated last November in a lauded agreement to grant the CCRB more direct access to BWC recordings.

“Implementing an initiative as robust as this is a complex and evolving process, and last November, the NYPD and CCRB executed an agreement that fostered our shared goals of transparency and accountability and streamlined the sharing of video,” Kaye wrote.

The CCRB is an oversight agency largely appointed by the mayor, which is separate from the police department and charged with investigating and, in serious cases, prosecuting certain categories of alleged police misconduct. It has jurisdiction over four types of complaints, known as FADO: use of force, abuse of authority, discourtesy, and offensive language. When it discovers potential misconduct outside of FADO, the agency refers the issue to the police department’s internal affairs bureau. The CCRB can only open a case when a civilian makes a complaint.

The new report shows over the first seven months of 2019, the police department’s average response time to CCRB footage requests doubled from an average of 20 business days to 42 business days (for instances when no footage was recovered, the CCRB was informed its request was denied after an average of 37 days).

Over time, the NYPD has increasingly turned to editing or redacting footage before handing it over to CCRB investigators, citing state laws intended to protect personal privacy. In the first year since the body camera pilot began, redacted videos accounted for between zero and 17 percent of all footage provided to the CCRB. A year later, between April and July 2019, roughly two-thirds of all body camera footage received by the CCRB had been redacted by the NYPD’s Legal Bureau, according to the report.

Of all cases where the NYPD shared body camera footage with the CCRB, 43 percent have had footage redacted.

The NYPD says it must review, edit, or redact all requested video before turning it over to CCRB investigators because of state privacy laws, which contribute to the delays. The NYPD frequently cites statutes that protect the identity of minors, of people whose arrests have been sealed, and people receiving medical treatment, among others. The report recommends granting the CCRB access to sealed arrests, which can often result from unconstitutional stops -- the exact type of misconduct body cameras were originally meant to capture.

Officials from both the NYPD and CCRB believe the memorandum of understanding signed last November will improve response times and satisfy the practical concerns of police and investigators. The MOU will allow CCRB representatives to view unedited footage in a secured room before redactions are made, giving investigators the opportunity to better understand what evidence is relevant to their cases and easing the burden on police to review footage.

“It is our hope that this new system will streamline CCRB’s access to BWC footage, which is pivotal to our work,” Davie wrote. CCRB officials say the secured room should be operational by June.

As the agency comes to rely more on evidence from body cameras, it also has a growing need for digital storage space. The CCRB estimates that beginning in fiscal year 2021 the size of stored body camera audio and video will grow at a rate of 50 percent annually. It estimates storage costs will rise to $144,000 per year by fiscal year 2024.

The report also points to a number of potential and official misuses of body cameras that in some cases are widespread. Among them officers failing to record a full civilian interaction -- either turning their cameras on late or off early -- or obstructing the lens, especially with winter clothing. Particularly in use-of-force incidents and during police chases, body cameras can become dislodged or fall off, which often results in footage becoming interrupted or shut off, the report says.

According to the report, the NYPD Patrol Guide does not prohibit intentionally obstructing camera footage and the CCRB “identified instances where officers have used signals to prevent or halt the recording of police misconduct.”

The CCRB report singles out police practices around recording entry into civilian homes and places of work. It recommends officers be trained to activate their cameras prior to arriving at a residence in order to capture the entire interaction. The CCRB notes 10 percent of abuse of authority allegations are related to home entry.

The report also recommends the NYPD pursue technology compatible with its current cameras that automatically activates nearby body cameras when a police firearm or taser goes off. Other software would place a geo-tag on body camera footage, providing investigators more information about where an incident occured.

Another issue of particular concern to CCRB investigators is officers warning others when their cameras are recording, using code phrases like, “I went Hollywood,” “green,” or “we’re live,” or gestures like shoulder-brushing. The CCRB report cites a letter from the NYPD’s Legal Bureau, which states officers are trained to warn each other to “ensure that sensitive law enforcement conversation are not inadvertently captured on BWC video.”

The report also notes the NYPD Patrol Guide requires officers to inform members of the public when they are recording an interaction, which police representatives maintain is appropriate to address privacy concerns, ensure compliance with body camera policies, and to help deescalate volatile interactions.

The department “conducts robust auditing of body camera video – from the command level up through the bureau and oversight level – to address policy compliance, quality of the video and the quality of the police service. Follow-up action can include everything from instruction to formal discipline,” Kaye wrote.

While considered serious by the CCRB, the agency identified only 53 instances of misconduct related to the use of BWCs out of the 2,033 instances where it received footage. (The CCRB cannot investigate that type of misconduct, because it falls outside of FADO; it must be reported to NYPD internal affairs.)

The report recommends amending the Patrol Guide to explicitly prohibit officers from obstructing cameras or warning fellow officers that they are rolling “in an effort to obfuscate or facilitate police misconduct.” Doing so, however, could raise concerns among privacy watchdogs who want greater disclosure around the use of surveillance technology.