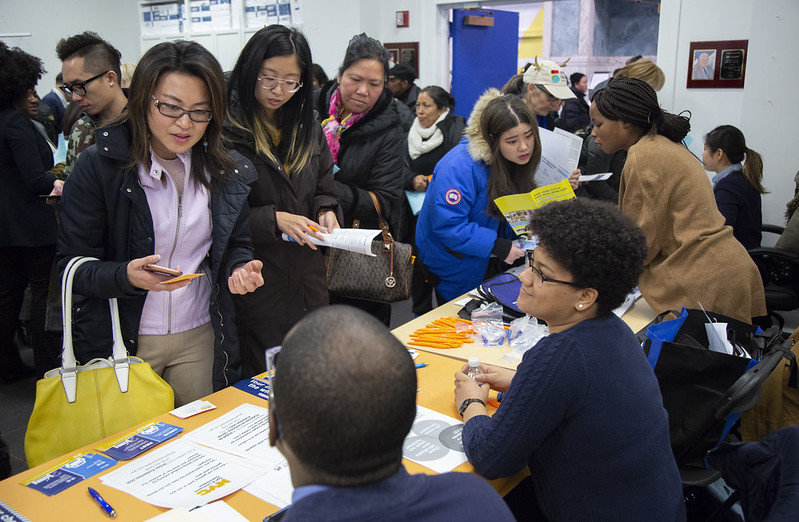 The decennial redistricting process in New York created a new “Asian opportunity” City Council district in Brooklyn, and three candidates have declared their intentions to run for the seat in the fast-approaching June primary.

Asian Americans were the fastest growing population in New York City between 2010 and 2020, according to the U.S. Census, accounting for more than half of the increase in the city’s population. South Brooklyn is home to one of the largest concentrations of Asian Americans in the city in neighborhoods including Bensonhurst, Gravesend, and Sunset Park. That led the New York City Districting Commission to redraw Council District 43 into a new district with a majority Asian American population – combining Bensonhurst, New Utrecht, and parts of Dyker Heights and Sunset Park – giving the growing community a prime opportunity to elect one of their own to the City Council. There has never been an Asian City Council member from Brooklyn.

Because of the redistricting process, the entire 51-seat City Council is heading into another election this year, just two years after the most recent citywide election. And the new District 43 is expected to be among the competitive races since there is no incumbent expected to run. (Council Member Justin Brannan, who represents the current, outgoing District 43 is running in the new District 47. And Council Member Ari Kagan, who represents the outgoing District 47, recently switched his party affiliation from Democrat to Republican, and will likely face Brannan in the general election.)

The population of the new 43rd City Council district is almost 54% Asian, 27.3% white, and 15.3% Hispanic, according to the CUNY Mapping Service’s Redistricting & You project. Though more than half of voters in the district are registered Democrats, it overwhelmingly went for Curtis Sliwa, the Republican candidate, in the 2021 mayoral election, over Democrat Eric Adams by a margin of 60.1% to 35.2%.

There are already three candidates running in the Democratic primary for the new 43rd district: Susan Zhuang, chief of staff to Assemblymember William Colton; Wai Yee Chan, executive director of Homecrest Community Services; and Stanley Ng, a retired computer programmer. Other candidates could enter the fray any time, and it could be a district where a Republican has a chance to win given recent voting trends in the communities that make up the new district.

In interviews with Gotham Gazette, the three candidates expressed similar priorities and concerns about crime and public safety, education and language services, and cost of living, among other issues that have been salient in Asian American and other communities in recent elections.

The race has some early echoes of the closely decided election in State Senate District 17 – a newly-created district that overlaps largely with Council District 43 – where Iwen Chu became the first Asian American woman elected to the State Senate in November. But Chu won her Democratic primary without competition, then held on to narrowly defeat a white Republican candidate in the general election, where she had to outrun Governor Kathy Hochul at the top of the ticket by a wide margin to capture the seat. Republicans have done well in the neighborhoods of the new 43rd Council District in recent mayoral, gubernatorial, and other elections.

“Crime and public safety continues to be the top issue for District 43 and I would say for Asians across New York City,” said Yiatin Chu, president of the Asian Wave Alliance, a political club that endorsed both Democrats and Republicans, though mostly the latter, in the recent statewide election. “The other is education. Education remains a top focus for the community and for District 43 in several different ways.”

What remains a concern for candidates and activists is low voter turnout among Asian Americans. A recent study by the Asian American Federation, an advocacy and research nonprofit, of turnout patterns in Assembly District 43, which overlaps with about half of the new Council district, found that turnout in the 2022 election was significantly lower in election districts (smaller geographic areas within Assembly districts) with a majority of Asian American voters.

“It's a very immature electorate,” Yaitin Chu said. “That can be said about, you know, all of the significant Asian communities but I would say this one especially, given the demographics of the mostly Chinese, largely newer immigrants that live in this district.”

Zhuang, who immigrated to the U.S. in 2007 from China, began her involvement with government as a volunteer for Assemblymember Colton eight years ago, before becoming his chief of staff. She has already been endorsed by Colton as well as former City Council Member Mark Treyger. Colton, who was just reelected, represents Assembly District 47, which covers Bath Beach and large parts of Gravesend.

As Colton’s chief of staff, she said she has personally helped thousands of constituents every year as they navigate the city’s bureaucracy. “I talk with them. I know what they want and what they need,” she said. She has also had to work with everyone from law enforcement to victim services, nonprofits groups and social workers.

In the wake of rising hate crimes, particularly against Asian Americans, in the last few years, Zhuang said she worked to bring together different communities to address the issue. “I bring everyone together to work for one issue, a common issue and then that's how I can empower the community,” she said.

Zhuang said she will be focused on crime and education, quality-of-life issues that are essential to her district. “I want public safety and also the best education for our community,” said Zhuang, who has two children in public school. She said she would advocate for gifted and talented programs and specialized high schools, as well as the need for more resources for special education. She wants an enhanced police presence across the district as well as increased funding for the NYPD, while also investing in services for those leaving the justice system.

She also wants to push for more affordable housing and language services and culturally sensitive services for small business owners in the district.

Wai Yee Chan
Chan, who was born and raised in Hong Kong, has lived in New York City for 27 years. “I have seen firsthand how immigrants struggle and how they cannot navigate and advocate for themselves,” she said, citing her time attending Teachers College at Columbia University.

Chan has lived in Queens for the last ten years and is moving back to Brooklyn as she runs for the Council seat, according to City & State. She has worked as a nonprofit executive for much of the last 20 years, most recently becoming the executive director of Homecrest Community Services, a nonprofit that serves Asian American immigrants and seniors, in 2020. She also serves on the Language Assistance Advisory Committee of the citywide Civic Engagement Commission and previously served as community engagement director for Council Member Brannan. She has quickly been endorsed by State Senator Chu and former Assembly Member Peter Abbate Jr.

Her primary concern, she said, is improving services for special needs families who have been “neglected and excluded at the city level for a long time.” “My heart is always on this group of people,” she said.

Chan also wants to expand the city’s Geriatric Mental Health Initiative to all senior centers in the district.

Chan supports gifted and talented programs and the Specialized High School Admissions Test, both of which former Mayor Bill de Blasio sought to replace in moves that caused significant controversy, particularly in the Asian American community. “But I do believe that we need to secure more resources for afterschool programs and summer programs on a city level, to help working parents and working families as well as immigrant communities,” Chan also said.

Public safety, of course, is also a top concern for Chan. “I do think that residents need to feel safe and socially connected, as well as small businesses need to feel safe to conduct business in our community,” she said. “I believe this is the fundamental need we all ask for. I will lift any concern to the city level and be a voice for that.”

Stanley Ng
“Why am I running? I feel that everybody in the community should have a voice,” said Ng, a retired computer programmer and member of the Citywide Council on High Schools. He was also previously a member of the Community Education Council for District 20.

Ng said that after retiring during the pandemic to spend time with friends and family, he worked with food banks and pantries to help out his community. “I'm a community person,” he said. “I am not involved with any of the political clubs. I am going to be representing the community that has no voice in the current structure.”

Ng’s top priorities are tackling crime and improving education. He wants judges to have more leeway in setting bail and urged the State Legislature to rollback bail reforms that were passed in recent years eliminating bail for most nonviolent crimes. “They must give judges more discretion…It is not working,” he said of the bail law.

He’s also focused on bolstering Gifted and Talented programs and specialized high schools. He once sued the New York City Department of Education over the Specialized High School Institute (SHSI), a program that helped prepare students for the SHSAT but excluded Asian and white students. He is one of the founders of the Scholastic Merit Fund, an advocacy group that fought against de Blasio’s efforts to eliminate the SHSAT.

Another issue that Ng said he is focused on is food insecurity in the district. “I’m probably one of the few people that can get businesses, nonprofits and the government to combine to get things to work,” he said.