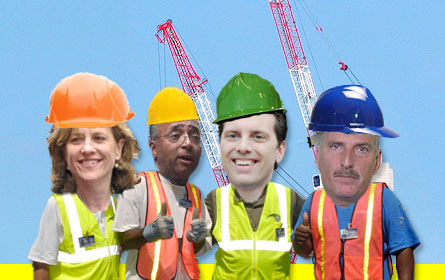 Image by Ya-Hsuan Huang
The candidates who have collected the most in campaign contributions from the city's developers: Melinda Katz, William Thompson, Eric Gioia and David Weprin

Under the glare of television cameras at the final mayoral primary debate last week, Councilmember and mayoral candidate Tony Avella took aim at his favorite villain.

"My opponent," he said referring to Comptroller William Thompson, "has taken huge amounts of money from the real estate industry." He paused, raised his voice and declared, "Nothing is going to change."

But in Avella's view, that villain is not so much Thompson, his primary opponent, but instead the city's real estate industry and run amuck development.

Wielding the city's most lucrative resource -- land -- developers have long used their purse strings to try to influence City Hall. And this year is no different.

The most viable citywide candidates have collected more than $2.5 million from real estate interests for the 2009 election, according to an analysis by Gotham Gazette. None have collected more than comptroller candidate and Land Use Committee Chair Melinda Katz, who took in more than 30 percent of that figure. Thompson and public advocate candidate and Councilmember Eric Gioia have also pulled in considerable sums at $393,000 and $314,807, respectively.

At the same time, some of the city's most well known or active developers have increased their donations by more than 30 percent since 2001 -- and we haven't even passed the primary.

In a city where addresses are a measure of wealth and real estate is more valuable than gold, it should come as no surprise that developers hold considerable sway over City Hall. But this primary season, should voters care whether their prospective representative is taking real estate cash or swearing off the industry altogether?

But no one, not even Siegel or Avella, is immune from the development industry.

According to our analysis, all of the citywide candidates have taken in some money from real estate interests. Katz took in more than $790,000 -- equal to about 31 percent of the private money she has raised. Katz defends her contributions, saying as head of the land use committee she did more to protect neighborhoods than court developers.

"I have raised from the same folks as all four of the candidates up here," said Katz during the final comptroller debate on Thursday. "I've raised money from an industry that I've stood toe to toe against."

Many of the companies that Katz received funding from, like Extell Development, which is responsible for the construction of Riverside South, or Rudin Management, which is developing a luxury condominium tower at St. Vincent's Catholic Medical Center, have given funds to multiple candidates in multiple races.

Related Companies, one of the city's largest developers that will put a proposal to develop the Kingsbridge Armory in the Bronx before the council before year's end, has given $32,425 to the citywide candidates -- $21,850 of it went to Katz's comptroller campaign.

Two Trees Management, the developer behind a controversial condominium project in Dumbo that opponents charge will obscure the view of the Brooklyn Bridge, gave more than $42,000 to members of the City Council this election cycle. Its project, Dock Street, was approved in June (Two Trees gave $10,000 to Gioia, who voted against the plan).

Doug Muzzio, a professor at Baruch College, said developers take this tactic to cover all of their bases. "The name of the game is land in New York and it's valuable," Muzzio said. "They are heavy contributors across a broad range of candidates, because they want to protect themselves."

Of the citywide candidates, both Avella and Siegel have been the most critical of developers. Nearly all of Siegel's contributions associated with the industry -- which total $8,405 -- come from low-level realtors. He has one $4,950 contribution from a West Harlem developer that fought against the expansion of Columbia University -- a position Siegel also took.

Avella has taken some funding from larger developers, like Muss Development, one of the largest single contributors in the 2005 election, according to the Campaign Finance Board. The Avella campaign said these developer contributions are from individuals Avella knows and are the "good guys."

In addition to these citywide contests, incumbent City Council members running for re-election are also raking in real estate funding -- many from developers who are managing, proposing or building projects in their districts.

In Jamaica, the site of one of the city's largest rezonings, Councilmember Leroy Comrie, who represents part of the area, took in more than $17,000 from real estate interests.

Councilmember Maria del Carmen Arroyo has taken in $6,225 from Jackson Development, which is planning a four building, 535-unit residential development for low and middle-income residents in her district. Jackson also gave $3,725 to Councilmember Maria Baez. The company is planning an 85-unit, mixed income building in her district on Monroe Avenue, which does not need city approval.

Eli Weiss, the director of finance for Jackson Development, said these projects are affordable housing, which the community wants. It is in no way a quid pro quo, he said.

"This is what is wanted by the local community and the local politicians," said Weiss. "This is housing that is going to remain affordable for years."

And it's not just incumbents who are seizing this type of funding. In Riverdale, incumbent Oliver Koppell is lashing out at his challenger, Anthony Cassino, for taking more than $4,000 from Riverdale developer John Fitzgerald -- who is behind a controversial luxury housing development in the district.

In Fort Greene, Councilmember Letitia James is facing off against Delia Hunley-Adossa, who is an ally of Atlantic Yards developer, Forest City Ratner. Even though Hunley-Adossa has not received funds from Ratner directly, her ties to the project have caused controversy.

Like it or not, candidates and observers say, taking developer money during the campaign season may make it look like a councilmember is favoring the developer at the Land Use Committee

"If you look at the amount of money [the industry] spends, you find they are one of the biggest contributor blocks as a profession," said Josh Skaller, who is running for City Council in the 39th district in Brooklyn and has pledged to not take developer money. "There is a direct correlation, in my opinion, in how our neighborhoods are being overbuilt right now."

In what some say is a backlash from the Bloomberg administration's pro-development agenda, some City Council candidates -- especially in areas where development has flourished -- have pledged to keep the real estate industry out of their campaign coffers.

"We want smart in-scale development that creates affordable housing and good jobs," said Brad Lander, a leading candidate for the 39th district, which stretches from Cobble Hill to Park Slope in Brooklyn. Since January, Lander has pledged to not take any funding from for-profit developers. "I think it's important that when elected officials make their decisions, they are being influenced by the public and the community and not campaign contributors."

The 39th district, candidates say, has seen some of the city's most out of scale development, like 10 to 15 story condominium buildings on Fourth Avenue. Next door, in district 33, which is the site of the massive Williamsburg Greenpoint rezoning, candidates are also taking an anti-developer funding oath, including one of the leading contenders Jo Anne Simon.

"A big issue throughout the city is development and the influence that developers have on decisions that are made with regard to rezoning projects," said Simon. "It's just better in my mind if you are not taking money from people that have an appearance of a conflict."

Simon has taken contributions from local realtors and landlords, which she says is not a conflict of interest.

And further north in Long Island City -- also a target for large luxury development -- candidates are saying no to developer cash as well.

"It's not only that you would be influenced by taking the money, but also the appearance of impropriety," said Brent O'Leary, a candidate for the 26th district in Queens. "I think it's important for the community to know that you're fighting for the community."

In the past seven years of the Bloomberg administration, approximately 100 rezonings have been approved by the City Council. Though a vast majority of those plans were to preserve the current scale and character of the city's neighborhoods, many allow large-scale, mixed-use development. In a lot of those areas, these anti-development candidates are emerging, in what some say is an outcry from the community for a change.

"Certain neighborhoods in the city have definitely seen unfettered undemocratic planning in their neighborhoods, whether it's Yankee Stadium or folks out in Queens that are really upset about McMansion development," said Bettina Damiani, project director at Good Jobs New York, an arm of the Fiscal Policy Institute. "Projects impact our lives and with this particular mayor, we are seeing it clearly."

Tomorrow's results will be a good indication of whether these messages are sticking.

Even though millions have poured in from developers this election cycle, this could be the last time the industry will be able to peddle such influence.

In 2007, the Bloomberg administration and the City Council approved pay to play legislation that limits contributions from anyone that does business with the city, including developers with land use applications. Developers who had been able to give up to $4,950 for citywide candidates and $2,750 for council candidates must now adhere to limits of $400 and $250, respectively. These limits took effect in December 2008, and the vast majority of contributions to citywide candidates came in before this deadline.

While the law might be too late to affect this year's election, Eric Friedman of the Campaign Finance Board said, the "problem" has been fixed.

"It didn't kick in in time," he said, adding, "This really is the broadest play to pay restriction in any jurisdiction anywhere in the countryâ€¦ [It] covers a broad range of business relationships."

The law applies to anyone who has more than a 10 percent stake in the company, as well as high-level managers and chief executive officers. It doesn't, however, apply to the family or friends of these individuals.

Though good government groups and advocates applauded the bill, many doubt that this will be the end of the real estate industry's era in city government.

"I can express hope, but knowing at the same time money is like water, and it tends to find where it wants to go," said Gene Russianoff of the New York Public Interest Research Group. "We'll see."