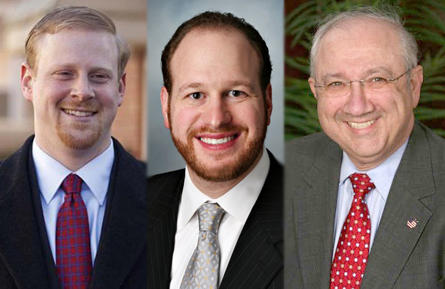 Unlike many candidates for public office Joe Lazar does not seem very interested in getting his political views out to the voters. Lazar, one of three candidates running in a special election for a Brooklyn City Council seat Tuesday, has declined to speak with the New York Times, City Hall or Gotham Gazette.

In contrast with most campaign web sites, Lazar's does not feature his views on the issues but refers visitors to his blog. It has exactly one post -- on the importance of educating children about the Holocaust. (Lazar's parents were Holocaust survivors who lost two children at Auschwitz.)

Despite -- or perhaps because -- of his reticence, Lazar is generally perceived as one of two frontrunners in the race to represent Brooklyn's 44th City Council district. He faces two candidates: Democrat David Greenfield and Republican Kenneth Rice, a lawyer for the police department, in the contest to replace Simcha Felder, a conservative Democrat and one of Mayor Michael Bloomberg's favorites council members -- at least until the two had a falling out last summer.

In this largely Orthodox area, which includes the heavily Jewish communities of Midwood and Borough Park as well as parts of Bensonhurst, Lazar has racked up endorsements from a number of prominent politicians including influential State Assemblymember Dov Hikind. Lazar also reportedly appears on a number of rabbi trading cards.

Rather than running on issues, Lazar points to his 40 years in government and working with various community groups and says this background will enable him to bring resources to the district even now. His slogan, while not exactly catchy sums that up: "In these tough economic times, we need a City Councilman who actually understands the budget."

Beyond the Public Schools

Many of the prime concerns elsewhere in the city find little resonances in the 44th district. With so many families sending their children to private religious schools, the quality of the city schools gets little mention here. Families tend to be large in this community, and parents want to ease the financial burden of sending so many children to religious schools.

This is key to Greenfield's campaign. Greenfield, the executive vice president of the Sephardic Community Federation, founded Teach NYS, a group working to get tax credits for all families, regardless of whether their kids attend public, private or parochial schools. He supports a $2,500 tax credit and said he would advocate for "consistent" funding of private and public schools.

Rice said he also favors tax credits and other way to help families who send their children to private or religious schools. But, he said, he supports all education and would work to improve the public schools with smaller class sizes and to create more charter schools.

Greenfield said he also would make older people a priority. "Seniors built our community. The idea we're not taking care of our seniors is outrageous," he said.

The 44th District has many small business or, as Rice put its, "it's all small business." Both Rice and Greenfield say government excessively taxes, fines and charges the small businesses and families of their district. Both call for easing the burden.

Rice said reducing taxes and fees could increase city revenues in the long run. "If you cut taxes and encourage small business and create jobs, you're going to bring in more money," he said. Now, though, he said, smal businesses "are going out of busines left and right."

The two candidates also agree that subways service in the area is not what it should be. Greenfield advocates more frequent train and bus services, as well as an express F train to Manhattan. To accomplish this, he said, there have to be major changes at the Metropolitan Transportation Authority. "You have to bring in a new team and do a top to bottom review. I think there has to be 100 percent transparency and accountability," Greenfield said.

In the one debate between Lazar and Greenfield (Rice did not attend), the two reportedly clashed over how to provide services in the midst of the city's budget woes. Lazar said the focus should be on saving programs and that "anybody that tells you they are going to go ahead and do new programs in this budget is out and out lying to you."

Greenfield said he "couldn’t disagree more" and continued, "in the budget process and the budget system we have to come up with innovative ways on how we can actually deliver services to our community."

Rice said in a later interview that the city could be more efficient.

Evolution of a Contest

The race has gone through many changes since Felder announced -- only two months after winning re-election -- that he would leave the post to become a deputy city comptroller. Several candidates -- notably Civil Court Judge and former Councilmember Noach Dear and Assemblymember Rory Lancman considered running but decided against it.

Ballot challenges knocked 18-year-old college sophomore Abraham Tischler off the ballot. A ballot challenge by Greenfield also forced Republican Jonathan Judge out of the election. Although Judge had collected 1,221 signatures -- and needed only 765 -- the Board of Elections and the courts ruled hundred of the names invalid. Judge called that charge "one absurdity on top of another," and told Boropolitics the move represented "the product of machinations of the Brooklyn Democratic machine under Vito Lopez and collusion with the Brooklyn Republican Party."

Being a Democrat clearly does not mean the same thing in District 44 as in many other parts of the city. In running unopposed in November, Felder had the endorsement of the Democratic, Republican and Conservative parties but not of the Working Families Party.

Rice said that many people in the largely conservatives neighborhoods express pleasure that he is Republican even though he said in many parts of New York "people are almost ashmed to be Republicans."

Felder was viewed as one of the most socially conservative members of during his eight years on council. Greenfield has said he will continue in those footstep saying at the debate he would take his values as a religious Jew to City Hall. Lazar reportedly said he would balance his personal views with those of his constituents.

Greenfield, who began contemplating a run for the seat years ago, before the extension of term limits, has raised $131,464. Lazar brought in $91,629 in contributions and Rice lags far behind with $2,200.

Rice conceded he had not been able to mount the kind of large-scale campaign his opponents have. But he said he has knocked on lots of doors and he concluded, "In a special election anything can happen."