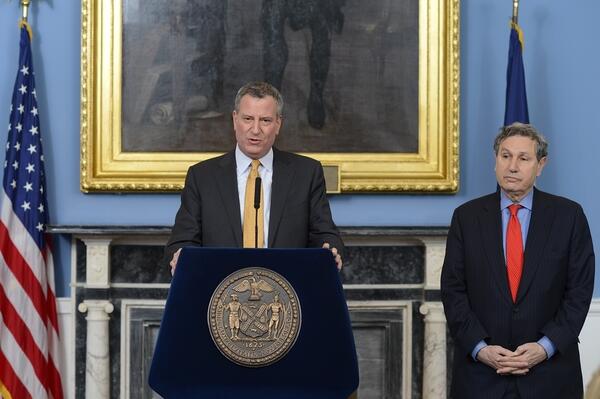 As expected, the City Planning Commission passed two major components of Mayor Bill de Blasio’s housing plan on Wednesday morning, sending the amendments on to City Council for public hearings on Feb. 9 and 10.

Mandatory Inclusionary Housing (MIH) and Zoning for Quality and Affordability (ZQA) each passed with nine commissioners in favor, three opposed, and one abstaining. The plans, which need City Council approval, aim to change the city’s land use rules in order to spur more real estate development, but in a way that encourages new affordable housing units and improved neighborhoods.

The Commission addressed a standing room-only meeting hall and overflow annex packed with a large turnout of members from both the Hotel Trades Council and New York chapter of the AARP. Each group publicly endorsed Mayor de Blasio’s housing plan in December, citing positive implications for hotel workers and seniors, respectively.

Planning Commission Chair Carl Weisbrod, who is appointed by the Mayor, roundly praised the amendments before the MIH vote, saying that the changes would “bring affordable housing to neighborhoods where it otherwise wouldn’t be built.”

Responding to oft-repeated criticism that the plans are too broad-strokes for community improvement, Weisbrod emphasized that the plan was not intended as a “one-size-fits-all” approach. He reminded attendees that the two amendments were meant to create a “floor, not a ceiling” for housing affordability in New York, pointing to subsidies from Housing Preservation and Development and other funding programs that would round out the mayor’s 10-year plan to create or preserve 200,000 units of affordable housing.

Other Commission members weren’t as optimistic. Commissioner Rayann Besser, appointed by Staten Island Borough President, and Commissioner Orlando Marin from the Bronx both voted against the MIH amendment with no comment, while Queens-based Commissioner Irwin Cantor voted against after asking that changes be made during City Council review.

De la Uz’s critique of MIH, which requires affordable housing as part of new developments obtaining a rezoning, is a frequent one cited by critics of the plan. As Weisbrod did, supporters of MIH say that the city has other tools to create affordable housing for those at the lowest ends of the income spectrum.

The MIH amendment passed City Planning with a few changes, including improvements to the Board of Standards and Appeals special permits provisions of the program meant to enhance the city’s Housing and Preservation Department’s role in reviewing hardship applications from developers, and some textual clarifications.

The ZQA vote proceeded in much the same fashion, preceded by Commissioner Weisbrod’s statement that the ZQA amendment is a “modest but essential update” to current regulations that will allow for easier construction of more affordable and transit-accessible housing for low-income residents and seniors, as well as encourage more progressive urban design and ground-floor use of residential buildings.

Commissioner Besser again voted no, citing Staten Island Borough President James Oddo’s concern about “too many unanswered questions” regarding the effects ZQA would have on neighborhood character. Commissioner Marin also voted no, without comment. Commissioner Cantor praised the “tireless” efforts of City Planning before voting against. Commissioner de la Uz again abstained from the vote.

ZQA passed with changes requiring a CPC special permit for long-term care facilities in low-density residential districts, and specification around ground-floor usage for those facilities.

City Planning moved the two zoning text amendments through to the City Council despite the fact that they had received near-universal disapproval from local community boards, which had reviewed the proposals previously.

The Council will hold public hearings scheduled for Feb. 9 (MIH) and 10 (ZQA), at which the Council’s zoning subcommittee, chaired by Council Member Donovan Richards, will hear testimony from city government representatives, housing organizations, residents, and others. After that, the City Council will deliberate and may approve, modify, or disapprove the amendments. It is all but certain that the Council will seek modifications to the plans, especially ZQA.

According to city land use modification rules, any changes to MIH and ZQA must be “within scope” of what is passed by the CPC and approved as such by the CPC. The City Council’s website defines changes “within scope” as alterations that “must be on the same topic and within the boundaries of what has been studied in the Environmental Impact Statement.”

Responding to discussion on Twitter of the City Council’s power to modify the amendments, Council Member David Greenfield, who chairs the land use committee wrote, “Suffice to say we can make significant changes on our own.”

Whatever versions of MIH and ZQA are produced by the Council will be voted on by the subcommittee on Zoning and Franchises, followed by the Committee on Land Use, and finally by the entire City Council.

While Wednesday’s Planning Commission majority vote lends a certain momentum to the changes being sought by Mayor de Blasio, advocacy groups continue to push back against both MIH and ZQA.

Community groups say that MIH does not address deeper affordability for New York’s lowest-income residents. New York Communities for Change issued a statement after the Planning Commission meeting, criticizing the commission’s decision. “Today the City Planning Commission sided with some of New York’s wealthiest developers to sell out our neighborhoods for a meager percentage of ‘affordable' units,” it reads. The statement specifically mentioned fast-food and homecare workers as being “left out of the city’s housing plans for decades.”

A cadre of preservation groups also spoke out vehemently against the CPC decision. Andrew Berman, executive director of the Greenwich Village Society for Historic Preservation, said in a statement, “By far the majority of our city’s communities and residents have spoken out against this plan. We call on the City Council to listen to the people and communities that elected them and to ensure this wrongheaded plan is stopped. Berman’s criticism was echoed in a press release by representatives from the Historic Districts Council, New York Landmarks Conservancy, Landmark West, and Friends of the Upper East Side Historic District.

Despite the pushback, Mayor de Blasio has expressed confidence that MIH and ZQA will be looked upon favorably by City Council members. The City Council Speaker, Melissa Mark-Viverito, has indicated her support for the proposals, though she has said she expects changes to be made before the Council votes them through - something repeated by several members, including Greenfield and Richards.

Discussing his plans recently in Albany, de Blasio said, “[W]hat we found in the previous approach was that there were not particularly stringent demands put on developers in terms of affordable housing and some of the plans that were agreed to with communities were not honored, so that has bred a lot of cynicism.” But, de Blasio added, “I have a very different approach."