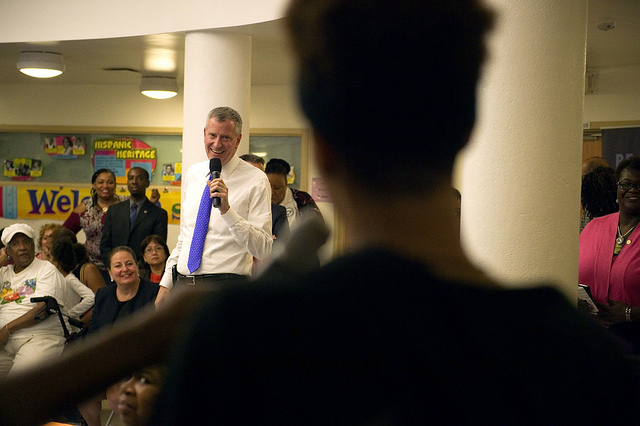 The New York State Senate announced on Thursday afternoon that it has scheduled two hearings on mayoral control of New York City schools. Republicans who control the chamber have questioned Mayor Bill de Blasio's education policies, which are far different from his predecessor's, and only agreed to a one-year extension last year.

Mayoral control is set to expire June 30, and the two hearings - one in Albany and one in New York City - will occur in May. In his Executive Budget, Governor Andrew Cuomo called for a three-year extension, while the Democrat-controlled Assembly called for seven years in its one-house budget. The Senate included no extension in its and appears to have concluded that mayoral control will be dealt with in the post-budget legislative session. The fiscal year 2017 state budget is due by the end of this month. The two hearings, at which de Blasio and his school chancellor Carmen Fariña are expected to appear, are scheduled for May 4 in Albany and May 19 in New York City.

State Senator Carl Marcellino, a Republican from Syosset, is chair of the education committee and will preside over the hearings. Marcellino replaced Senator John Flanagan as education chair when Flanagan became Majority Leader last year in the wake of former Senator Dean Skelos' corruption scandal. Flanagan has publicly questioned de Blasio's stewardship of the city's schools and said he expected to hold hearings on mayoral control.

"These hearings will provide an excellent opportunity to hear directly from Mayor de Blasio, Chancellor Fariña, and a variety of education professionals on the merits and pitfalls of mayoral control," Marcellino said in a statement announcing the hearings. "Without a detailed and thoughtful exchange, it is difficult to craft an extension that is in the best interests of New York City's students and teachers. I look forward to gathering testimony on the current state of the Mayor's education policy, where it is and its future."

Asked for reaction and whether de Blasio will appear at the hearings, a mayoral spokesperson did not indicate if the mayor will participate in both, but did send a statement implying that he will. "Mayoral Control has empowered parents to hold their mayor accountable for success in our schools," wrote Amy Spitalnick of the mayor's office. "There's broad consensus across educators, business leaders, and the political spectrum that Mayoral Control works. Mayor de Blasio looks forward to presenting his vision for equity and excellence in our public schools, and articulating why Mayoral Control is the governance model that will make it a reality."

When the Senate released its one-house budget earlier this month without an extension of mayoral control of schools, Gotham Gazette asked Mayor de Blasio for his reaction at an unrelated press conference, saying that it looked like the Senate Republicans planned to pursue hearings on the subject after the budget.

"Which I've told Leader Flanagan I would welcome," de Blasio said of hearings, "and I would participate in personally. I made that very clear to him this year and last year."

"I welcome that dialogue," de Blasio added. "We have the highest graduation rate that we've ever had in New York City – over 70 percent. We have full-day pre-k for all. We have after-school for all middle school kids. We're making unprecedented investments in education – computer science for all is going to be online more and more. I welcome that discussion, and I think we have a lot of evidence to show, and I can certainly say there's a real broad cross-section of New Yorkers, including in the business community, the labor community, obviously educators who believe in mayoral control. That's a discussion I would be happy to participate in."

When he was seeking an extension of mayoral control of city schools last year, de Blasio rolled out a number of supporters from a variety of parties, including business leaders who have often been supportive of charter schools, which the mayor has been cool, if not hostile, toward and represent a key issue for Senate Republicans.

In announcing the hearings, Flanagan said in a statement, "Mayoral control hearings are necessary to provide transparency, accountability, and a better understanding of the long-term vision for educating all of New York City's students. Senator Marcellino and the members of the education committee will seek information about what is being done to fix underperforming schools and other specific plans to improve and strengthen the city school system so that the state's examination of mayoral control is as comprehensive as possible."

Asked earlier this month if he had reached out to Flanagan, de Blasio referenced his meeting with the Senate leader during a January visit to Albany for Gov. Cuomo's State of the State address. "I've already sat down with him, obviously, and talked to him about this," de Blasio said. "I've certainly made my case to him. It was a very good, respectful meeting. I think he heard my points. I'm not saying he agreed with all of them, but he heard them. He knows a lot about education, obviously, from his own work on the education committee in the Senate. And I welcome a dialogue – I told him I would happily appear at a hearing any time he needs."

Mayoral control of city schools was first granted to former Mayor Michael Bloomberg in 2002 and then extended. According to the state Senate, when it was renewed for six years in 2009, that decision came after "five hearings with more than 45 hours of testimony."

The Senate announcement sent out Thursday says that topics for the hearing will include "New York City's record of student performance, graduation rates, levels of college and career readiness; the effectiveness of having a single person accountable for the public school system as compared to the previous community board system; the implementation and performance of the pre-K system; coordination and cooperation with other public schools and private schools; and identifying educational issues in need of improvement. The hearing details are currently being finalized and once complete, the Committee will extend invitations to provide testimony."

De Blasio is sure to be asked about his approach to charter schools, as well as his Renewal Schools program that puts major investment of resources into the most struggling schools, seeking to avoid closing schools, which was a favored approach under Bloomberg. De Blasio is much more closely aligned with the teachers union than Bloomberg was - and Gov. Cuomo has largely been more in the Bloomberg camp on education policy, though he has shifted some over the last several months. De Blasio will certainly put his establishment of pre-kindergarten at the forefront.

The old system of education was under local school boards, which has been replaced by a centralized mayoral control, with the mayor appointing a chancellor and a majority of members to the Panel for Educational Policy, a decision-making board largely seen as a rubber stamp for the mayor and chancellor.

[Related: What is Flanagan Looking for From De Blasio on Mayoral Control?]