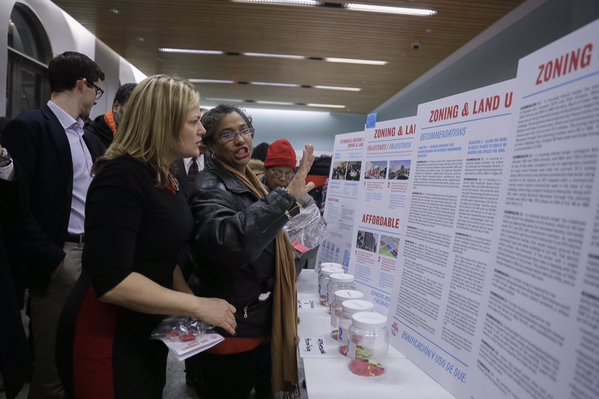 Community calls for community planning
City officials have not yet presented a timeline, much less a plan, for rezoning East Harlem, but that hasn’t stopped residents from preemptively organizing against “upzoning” that they believe will accelerate displacement of low-income people in their neighborhood. Two community-driven plans have emerged from El Barrio since November: one, an attempt at leveraging rezoning for a higher percentage of more deeply affordable housing and community benefits through collaboration with city officials; the other, an outright rejection of the mayor’s plan and a demand for better protections for immigrants and very low-income people living in regulated rental units.

Speaker Mark-Viverito, who represents East Harlem and parts of the South Bronx, told NY1 in January, "The question is, do we want to let things stand and get nothing out of it, or do we try to get something, allow the density to happen, with a benefit to the community? To me, the answer is very clear. We have to get something for the community.”

“Getting something for the community” seems to be the theme of the East Harlem Neighborhood Plan, which was completed in February by a broad coalition led Mark-Viverito, Manhattan President Gale Brewer, and advocacy group Community Voices Heard. 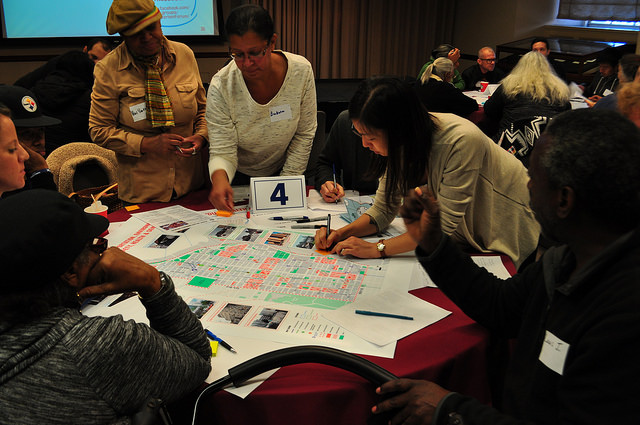 The EHNP is the product of a 10-month process in which over 1,300 East Harlem residents filled out hundreds of community surveys, gathered for seven community vision workshops on 12 topic areas, and produced an exhaustive list of recommendations for neighborhood preservation and improvement. While it certainly won’t halt fear of gentrification and displacement, it may go a long way in influencing the rezoning plan put forth by City Hall, and, many believe, stemming the tide of displacement while improving the community in a variety of ways.

The plan’s recommendations span 12 themes, ranging from improvements to NYCHA developments to arts and culture preservation to senior needs, but two issues took precedence over the rest: the preservation of affordable housing and job creation.

The plan specifically calls for better enforcement of anti-tenant harassment laws, additional legal and educational support for tenants, and policy changes and increased funding aimed at preserving existing regulated units and bringing more units under regulation. The plan also recommends that the city build off of the affordability that will be required on private rezoned sites under the new Mandatory Inclusionary Housing rules. The plan recommends 100% affordable units on public sites, and asks that all tools, such as HPD subsidies and programs, be utilized to achieve deeper affordability for the lowest-income residents.

East Harlem’s distinction as the home district of the powerful City Council Speaker sets the area apart from other neighborhoods on deck to be rezoned. Still, other Council members took notice of the EHNP effort, even attending the final planning event, eyeing ways in which they can lead a local process to get ahead of a more centralized, mayoral administration-run plan for rezoning.

The EHNP coalition sent the 134-page plan to the City Planning Commission and other city agencies after its release on February 25.

Community planning in New York neighborhoods is not a new concept; the Department of City Planning has been organizing “place-based planning studies” in other to-be-rezoned neighborhoods to help develop recommendations for affordable housing, economic development and infrastructure investments, and assisting community and borough boards in the creation of 197-a community plans.

The city created the rezoning plan that is now being negotiated for East New York after a number of community meetings, and the process is playing out in Flushing and other areas slated for rezonings.

But the Speaker calls the EHNP the first of its kind in the city, emphasizing a proactive, bottom-up approach.

“We’re kind of doing it upside-down. Usually an application is presented and we respond to it, right?” Mark-Viverito said to the audience at an EHNP community forum on January 27, referring to the typical land use review process (ULURP), which is taking place in East New York. “The [East Harlem] application hasn’t even been submitted. We have a plan, we’re giving it to the city, and we’re forcing the city to consider and take into account those needs in the application process.”

It remains to be seen whether the Speaker’s influence will fortify the plan once the rezoning process begins in East Harlem, but many people involved believe that the strength of the plan’s process and government-community partnerships have given the neighborhood the best chance of success as they both brace for and embrace the rezoning.

"This is a document that we actually want to govern how East Harlem is developed and evolves over time,” said Sondra Youdelman, director Community Voices Heard, in a February interview with Gotham Gazette. “Now it's up to the city to figure out which policies and tools need to be coupled together to make this happen.”

'Consulta del Barrio'
Movement for Justice in El Barrio, founded in 2004, is an organization predominantly comprised of and led by immigrants - mostly women - who have lived in rent-regulated apartment units in East Harlem for decades. The organization claims over 1,000 members and organizing within 95 privately-owned buildings in El Barrio.

MJB released in November 2015 a 10-point plan that roundly rejected the mayor’s zoning plans as they stood then and focuses almost exclusively on housing preservation for low-income residents in rent-regulated apartments, people of color, and immigrant communities, which the group says are disproportionately displaced by landlord harassment and gentrification.

“Our members didn’t want to just reject the plan,” said Juan Haro, an organizer at Movement for Justice in El Barrio. “They wanted to put forward a concrete proposal to improve the housing situation in our neighborhood.”

The document is also an indictment of what Movement for Justice calls a failure by HPD to enforce housing codes and protect tenants’ rights.

“We believe that when HPD is not responsive to landlords breaking the local housing code, and their unresponsiveness allows landlords to get away with driving out tenants, which contributes to displacement and gentrification,” Haro said.

Movement for Justice in El Barrio’s plan calls for increased and independent oversight of HPD; a public education campaign to inform tenants about HPD's role; a new body to collect fines levied against negligent landlords; publication of inspection documents in multiple languages, penalties for landlords who fail to make repairs within 24 hours of emergency violations; the establishment of an East Harlem HPD oversight team; and improvements to HPD’s inspection and follow-up speeds.

“We know that there is a digital divide,” he said. “Many folks in the neighborhood don’t have access to Facebook or Twitter, so we focused on on-the-street outreach, and worked in the evenings and on weekends when more people weren’t at work.”

Public meetings were “fluid and organic,” Haro added, and residents attended to learn more about the intricacies of the rezoning proposal and land use in general. Participants voted to reject the mayor’s proposals, and formulated the demands that would become the pith of the 10-point plan.

The plan concentrates on protecting tenants of regulated, private apartment buildings, because those tenants have the most at stake as the neighborhood gentrifies, Haro said. “Landlords cut off basic services and violate local housing codes,” he said. “They offer buyouts to tenants to surrender their units. They threaten to bring in immigration authorities or ask for proof as citizens and threaten based on citizenship."

The de Blasio administration has mounted an initiative to deter evictions and landlord harassment in rapidly changing neighborhoods with the creation of the Tenant Support Unit in August of 2015. The mayor announced in February that the unit had resolved its thousandth case since it began offering assistance to tenants.

While reviews of the unit’s methodology have been mixed, the administration touted a ten-fold increase in free legal services for tenants, for a total of $62 million in funding that will be fully implemented for the 2017 fiscal year, which begins July 1 of this year.  As a result, de Blasio said, evictions by city marshals have decreased 24 percent since he took office, down from 28,849 in 2013 to 21,988 in 2015.

While the new support measures and protections introduced by the mayor seem to be having a positive effect, members at MJB believe that they will still be forced out once rezoning takes hold.

Movement for Justice in El Barrio members organized a series of protests against the mayor’s plan leading up to a Community Board 11 vote on MIH and ZQA in November.

Sandra Cruz, a member, said at a rally before the meeting, “We are against the mayor’s ‘luxury housing plan’ because we know that 25-30% of the apartments that the mayor says will supposedly be constructed for low-income people will not be accessible to the poor people of East Harlem, because we don’t make enough money to pay those high rents.”

CB 11 voted “no with conditions” on the mayor’s citywide zoning plans. This feedback, similar to that of community boards across the city, helped inform the City Council’s negotiations with the de Blasio administration over the final versions of MIH and ZQA.

Movement for Justice sent its 10-point community plan to Speaker Mark-Viverito and Borough President Gale Brewer in November, but have not received a response, they said. Meanwhile, Mark-Viverito, Brewer, and a variety of other stakeholders, were in the process of creating the East Harlem Neighborhood Plan.

Like East Harlem, East New York’s population is predominantly Latino and African-American, and the neighborhood AMI is around $34,000. City Council Member Rafael Espinal represents much of East New York and remains adamant that the plan for the area not help in pricing out long-term residents.

"Neighbors on my street are already jacking up the rents to $1,800 [per month]," Espinal said at a March 8 City Council hearing on the East New York rezoning.

Parallels between East New York and East Harlem are undeniable, and many are watching the process for clues as to how the future may unfold in El Barrio. East Harlem may be slightly further along in a gentrification process as of now, but both neighborhoods are changing.

Though some involved in the East Harlem Neighborhood Plan are skeptical as to how much of the document will be seriously considered by the city, the speaker hopes that the document will serve as a model for other communities down the road.

“It would be great,” she said at the January 27 community forum, “if the administration established some sort of process to create neighborhood plans in every area that would be rezoned.” She followed this up by devoting a portion of her February State of the City address to the Council’s proposal that the city develop a Neighborhood Commitment Plan that would accompany all rezoning proposals, “describing and tracking commitments for housing, schools, infrastructure and other city services.”

“Planning for the future of our neighborhoods should start from the ground up and infuse the voices of everyday New Yorkers into policy decisions,” Mark-Viverito said in her address. She remarked that the community planning process is an opportunity to discuss neighborhood concerns “from school overcrowding and pedestrian safety to sewers and public transit.”

For community organizations in El Barrio, the work has only just begun. Leaders across groups and initiatives say they’ll continue to apply pressure to the city to respond to demands for deeper affordability, better protection of tenants’ rights, neighborhood improvements, and capital investments. Essential, they say, is community power in all processes.

Even as the future of East Harlem seems unsure, long-time resident Pearl Barkley notes the surge of neighborhood civic engagement around rezoning as a silver lining.

“I grew up in a time of social movements, with activism throughout the neighborhood,” Barkley said. “Right now, when I attend meetings, I see young people standing up, excited to talk about what they want for their city. That gives me hope. It makes me happy.”