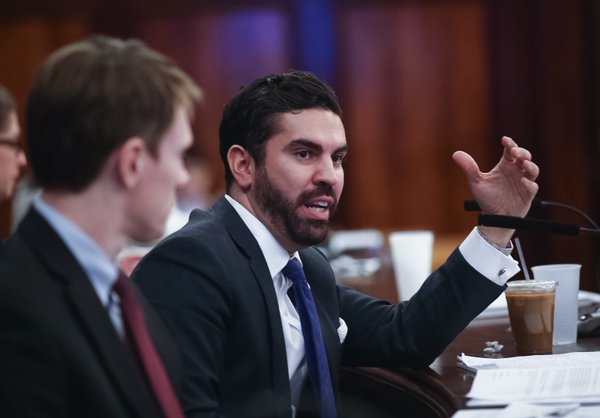 With only two weeks left for the City Council to vote on the proposed rezoning of East New York, all eyes are on City Council Member Rafael Espinal, who is leading negotiations with the de Blasio administration and whose approval of a revised plan will determine its fate. Espinal has promised significant improvements to the plan put forward by the city and community organizers and advocates are calling on him to reject the rezoning if it does not deliver what they see as adequate affordable housing, local hiring, and other provisions.

Meanwhile, Espinal's colleagues and many others are looking to him as the East New York negotiations with the de Blasio administration will set the precedent for rezonings across the five boroughs.

The city's proposal to rezone East New York was passed almost unanimously by the City Planning Commission on February 24, giving the City Council the next fifty days to vote on it as part of the city's Uniform Land Use Review Procedure (ULURP). The neighborhood is the first of 15 the city plans to rezone as part of Mayor Bill de Blasio's ambitious plan to create and preserve 200,000 units of affordable housing. The plan aims to change land use rules and implement community improvements in order to make East New York more desirable and liveable, while fostering development that will include thousands of new units of housing, many of them with rent regulations.

Negotiations so far have been slow going, leading to a series of news reports this past week indicating that Espinal and others on the City Council side of the bargaining table are frustrated with the de Blasio administration. The parties are set to hold another meeting on Monday afternoon at City Hall, which participants hope will yield progress.

"There's a lot of frustration because we've proposed changes to the plan and we've been waiting for [the administration] to come back to us," said Espinal, whose district covers a vast swathe of the area in the plan - the City Council traditionally defers to the local Council member to approve or disapprove land use deals.

Espinal has made his priorities clear: "serious anti-displacement measures, a strong jobs plan and truly affordable housing." While he insists there has been no push back from the administration against his demands, the lack of movement seems to be testing his patience.

"The clock is ticking," he said. "We've been working on this for over a year. It's time to talk turkey." Espinal did say that one cause for delay was that both the administration and Council had been preoccupied until last week with the Mandatory Inclusionary Housing and Zoning for Quality and Affordability proposals, two citywide zoning amendments that lay the groundwork for the neighborhood rezonings that are set to go from East New York to Flushing, corridors in the Bronx and on Staten Island, East Harlem, and beyond.

The de Blasio administration has reiterated its commitment to the process. "The city is currently having very productive conversations with Council Member Espinal on the East New York rezoning plan," said Austin Finan, a spokesperson for the mayor, in a statement. "Since the beginning of the East New York planning process, we have been and remain committed to ensuring that the final proposal to be voted on by the City Council meets the affordable housing and community infrastructure needs of East New York residents."

Espinal will meet with city officials on Monday to hammer out the details of the East New York plan. On the Council side of the table, he'll be joined by Council Member Donovan Richards, chair of the Subcommittee on Zoning and Franchises, and Council Member David Greenfield, chair of the land use committee. Also expected to participate are the Council's land use director, Raju Mann, and the chief of staff to Council Speaker Melissa Mark-Viverito, Ramon Martinez.

According to a source with knowledge of the discussions around the rezoning, key sticking points include not only ensuring deeper levels of affordability in new housing, but also extending affordability for about 1,000 current residents whose rent-regulated apartments are nearing expiration of their terms; details of the city's commitment to a Workforce1 job training center; and progress around adding school seats and day-care slots - two areas of need in the administration's final environmental impact assessment of the rezoning plan.

"We have an opportunity to show that we are attacking inequality head on in East New York and the administration needs to take this issue seriously as we negotiate the first rezoning under MIH and ZQA," said Council Member Richards in a statement. "The lack of progress thus far on these negotiations is deeply concerning and we need to see legitimate movement soon to ensure that the needs of the community and Council Member Espinal are met."

All the stakeholders -- Espinal, his colleagues, community leaders, housing advocates, de Blasio administration officials, real estate developers, and others -- recognize that these rezoning negotiations will set the tone for the next fourteen and determine the future of housing and development in the city for decades to come.

"What I'm doing in East New York is the reason I ran for office," Espinal said. "It's an opportunity to create the strongest affordable housing plan in the city and set a precedent for how the rest of the city approaches rezoning." He has received strong support from his colleagues who, he said, "feel that whatever deal I'm able to reach with the administration, they can work off of when their neighborhoods are up for rezoning."

Council Member Peter Koo from Queens is likely to be next in the hot-seat as the Flushing West rezoning proposal moves through the ULURP process.

"We're certainly watching what happens in East New York closely," Koo said in an email, "but the Flushing West rezoning proposal is significantly different. Our rezoning area is on the waterfront which limits depth, and the LaGuardia flight path limits height. Flushing also has serious infrastructure needs that a large-scale rezoning of this nature would need to address. So we're watching East New York to see how the city responds to the community because Flushing also has a long list of needs."

Housing advocates also recognize the immense pressure that Espinal is facing, although different groups have taken varied approaches to respond.

"The guy's in a difficult spot," said Jonathan Furlong, zoning technical assistance coordinator, Association for Neighborhood and Housing Development. "What he decides in East New York has vast and far reaching implications for the Bronx, East Harlem, Flushing, Upper Manhattan."

ANHD has provided technical assistance to the Coalition for Community Advancement, a collaborative effort by housing advocates to address issues of rezoning across the city, communicating with administration officials, elected representatives, and residents. Members have met with Espinal numerous times to air their concerns and will also be meeting with Council Speaker Mark-Viverito.

The CCA has called for a scaling back of the East New York plan and has proposed its own alternative community plan. Besides more affordability for current residents, they want manufacturing sites removed from the plan to protect manufacturing jobs, a $15-million small homes preservation fund, the preservation of the Arlington Village development as affordable housing, and mechanisms to set aside space for community facilities.

On Sunday, the coalition held a rally outside City Hall to tell the Council to vote against the rezoning plan unless these proposals are embraced. The group said Sunday night that about 120 people rallied, including community members, State Senator Martin Dilan and Assembly Member Latrice Walker.

Furlong commended Espinal for being firm with the administration, but faulted him for not being more vocal on specific proposals. "It's tough to get a read on him," he said of the Council member.

New York Communities for Change, a grassroots advocacy group, has been more critical. NYCC released a report titled "Educating Espinal: How to Deepen Affordability for Thousands of Apartments in East New York and Protect Low-Income Residents" in which they directly called on Espinal to fight for more affordability in the plan.

"The Council member has not yet come out in support of a growing cry in the community for deeper affordability for low-income families," said Jonathan Westin, NYCC executive director. The group, which claims about 1,000 members, has two demands: 50 percent of units in new developments affordable for families making about 40 percent of the $77,000 annual area median income (AMI), and union jobs for workers in any new construction along upzoned areas. AMI is a federally-calculated number for all of New York City and surrounding counties. The area median income in East New York is significantly lower - about $35,000 per year for a family of four, about the same as 40% of AMI.

"We're pushing that if that's not part of the plan, he should vote "no,"" said Westin. "He should not vote against the interests of his constituents."

Asked recently about the East New York rezoning and the pushback it has received, Mayor de Blasio said that development and gentrification are taking place all over the city and that the city must take action to harness it. On WNYC's The Brian Lehrer Show, the mayor said on March 18 that "the worst thing in the world is to do nothing about" gentrification. "And bluntly," he said, "that was the broad approach of the previous administration and I point to neighborhoods like Bushwick and Bed-Stuy as classic examples where there was no rezoning" to offer developers more in exchange for community benefits.

Saying that there needs to be "a coherent governmental response" to gentrification and displacement, de Blasio said that "rezonings are absolutely necessary to create that affordability...if we don't do it, you'll see displacement with no countervailing action by the government." The mayor indicated that the East New York plan will include many affordable units for both lower- and middle-income residents.

It is negotiations on the plan that will yield the full details of what that government response is, in East New York and elsewhere.

On Thursday, New York Communities for Change led a rally in East New York, blocking traffic along Atlantic Avenue to draw attention to their demands. "Along Atlantic Avenue is where lots of developers have bought property and stand to make a windfall of profits from the rezoning," said Westin. "We need to ensure that with the increase in density that they get from the rezoning, there are deep affordability standards and real job standards for workers building these buildings."

Espinal was blunt about NYCC's efforts. "I don't need any educating," he said of their report. "I was born and raised there. I know exactly the struggles my constituents are going through."

Insisting that he prefers a "pragmatic approach," Espinal said he wants a holistic plan that covers all constituents and their needs, and that the administration has been receptive.

"To be fair, they've been listening," Espinal said. "But the time to listen is over. It's time to take action."

Note: this article has been updated with details of the Sunday rally.