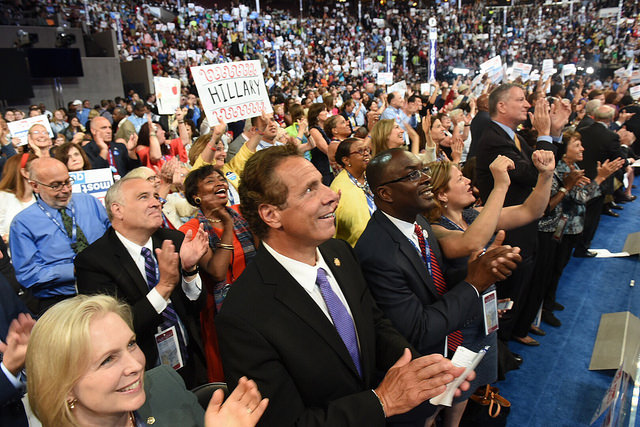 Cuomo, de Blasio & others at the DNC (photo via NY Democratic Party on flickr)

“Number one, the main goal coming into this convention was to make sure we left unified,” Governor Andrew Cuomo said on Thursday morning, apparently without a sense of the irony in such a statement. Cuomo, the Democratic governor of New York, continues to be locked in a feud with Bill de Blasio, the Democratic mayor of New York City, which produces a current of disunity running through any and all politics the two are involved with.

The conflict follows them everywhere, even to the Democratic National Convention, where each spoke on the main stage without mentioning the other, and can overshadow such speeches, policy announcements, and other events. Even while both were in Philadelphia calling for party unity behind Democratic presidential nominee Hillary Clinton, there is no evidence that either Cuomo or de Blasio is doing anything to bridge their own ongoing divide.

Each took pains to compliment Vermont Senator Bernie Sanders on his presidential campaign, attempting to help heal the divide between the Sanders and Clinton camps after a contentious presidential primary. A far different approach than they take with each other.

“Governor Cuomo and I and Democrats all across the state of New York are absolutely unified when it comes to Hillary Clinton,” de Blasio told WNYC’s Brigid Bergin during a Tuesday interview at the convention when Bergin pressed him on the unity contradiction.

“I don’t think anything is irreconcilable in life,” de Blasio went on to say, as he often does when asked about the frayed relationship. “But I would say there are fundamental, ideological differences. And then I would also say there’s the issue of how the State of New York treats the City of New York,” he added, in a now-familiar refrain.

Last month, when Gotham Gazette asked the mayor if he had any plans to try to improve the relationship, de Blasio did not say yes or no, but said he’s always open to working with the governor. At a recent press conference, de Blasio gave a typical answer about the conflict: “I’ll always look to work with the governor whenever we can. And when I think he’s doing something right for New York City, I will commend him, I’ll work with him. When I think he’s doing something wrong, I’ll call it out.”

At a Democratic convention, both Cuomo and de Blasio have a lot to boast - combined they’ve made significant progress on LGBT rights, the minimum wage, paid family leave, affordable housing, education, and more top progressive agenda items. Instead of crediting one another, they avoid each other.

De Blasio was scheduled to speak at the Thursday morning breakfast event at which Cuomo was talking of party unity. But due to some combination of the length of the program, a lack of communication, the feud, and de Blasio having another event to get to, he left without addressing those gathered.

There, he heard Cuomo call New York “the progressive capital for the country,” but make no mention of the liberal mayor of the country’s biggest city who has pushed New York politics leftward. “We have really made this progressive agenda a reality,” Cuomo said after laying out accomplishments like marriage equality and a path toward a $15 per hour minimum wage. He made no mention of the pre-kindergarten program that has been de Blasio's biggest accomplishment as Mayor and is supported by state funding.

The 2014 fight over funding for pre-K saw some of the earliest seeds of the conflict between Cuomo and de Blasio that has become more intense over time - especially after the mayor publicly lashed out at the governor on June 30, 2015 for undermining the city's interests. The two have clashed over a wide variety of policy issues over the past two-plus years. Spokespeople for Cuomo and de Blasio did not return requests for comment for this story.

At that same Thursday DNC breakfast, the Democratic state Senate Minority Leader, Andrea Stewart-Cousins, also addressed party unity. Cuomo has been accused, including by de Blasio, of hurting Democratic attempts to take control of the Senate and therefore all of state government. “I want you to understand that as we unify Democrats on the national level,” Stewart-Cousins said, “we can unify Democrats on the state level.”

New York’s top two Democrats, Cuomo and de Blasio, went to Philadelphia ready and able to brag of the progressive accomplishments made back home, but not on speaking terms. They left just as far apart, if not more so.