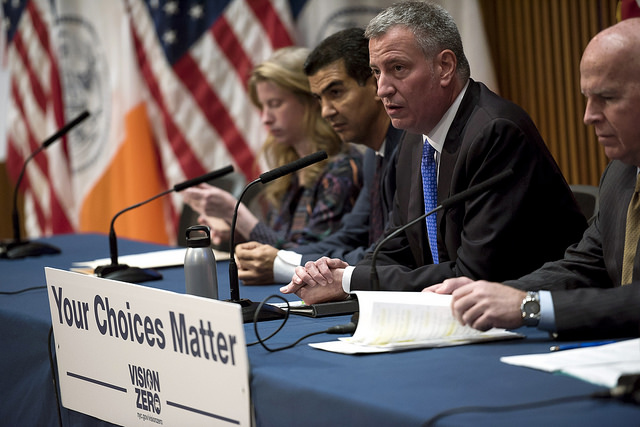 The City Council will pass a bill this week to put significant limits on the donations that political nonprofits aligned with elected officials can accept from entities with city business. Mayor Bill de Blasio intends to sign the bill, sponsored by Council Speaker Melissa Mark-Viverito, into law.

While she has been a close ally of the mayor, in crafting the bill Mark-Viverito condemned one of the most controversial aspects of de Blasio’s tenure, The Campaign for One New York. And in supporting the bill, de Blasio is giving at least implicit acknowledgement that there are problems with The Campaign for One New York’s fundraising practices. Created and run by de Blasio allies, the nonprofit advocacy group took in millions of dollars in donations from entities with city business, chiefly labor unions and real estate developers, leading to allegations of a “pay-to-play” culture and law enforcement investigations.

During a Tuesday press conference, de Blasio did not directly answer questions from Gotham Gazette about his support for the bill and acknowledgement of problems with Campaign for One New York fundraising, instead defending the organization, which was shut down amid controversy. After the press conference, de Blasio’s chief spokesperson clarified that the mayor supports the bill because it helps get money out of politics.

The new regulations outlined in Mark-Viverito’s bill would limit donations from those with city business “to non-governmental entities controlled by a local elected official or their agents.” The new limits will match those that are part of the city’s public-matching campaign finance system, wherein entities with city business can give only $400 to a candidate’s campaign.

Thus, the bill the City Council will pass on Thursday and de Blasio will sign into law at some later date will create regulations that would have made the Campaign for One New York subject to much stricter fundraising rules, likely crippling its ability to raise the major sums of money that funded its main effort: a campaign to push for state funding of pre-K. A great deal of the money that Campaign for One New York spent went to political consultants close to de Blasio who ran the pre-K campaign.

A spokesperson for Mark-Viverito confirmed that the bill shows a belief by the speaker that the way The Campaign for One New York did business was not appropriate and that it is important to put limits on the fundraising that such groups can do from entities with city business. The bill also requires donor disclosure, something de Blasio’s group did voluntarily. Mark-Viverito’s spokesperson said the speaker will address the bill on Thursday before it is passed.

Mark-Viverito was not present at a November 21 hearing on the bill, despite being its lead sponsor. The Council’s standards and ethics committee will pass the bill on Wednesday before the full Council votes Thursday.

De Blasio has been criticized for what some call a “pay-to-play” culture, whereby he created a new place to give large sums of money for those looking to curry favor with him and his administration. City Comptroller Scott Stringer has called The Campaign for One New York a “slush fund.”

The question of whether donors were promised or received government favors in exchange for their donations is the subject of ongoing law enforcement investigation. No one has been charged with a crime and de Blasio maintains that he and his allies acted legally and ethically.

The city’s campaign finance system has it’s doing-business limit of $400 in place in order to reduce real or perceived conflicts of interest.

On Tuesday, Gotham Gazette asked the mayor if by supporting much stricter donation limits to elected official-aligned nonprofits he is acknowledging that the way The Campaign for One New York’s did business was problematic.

“No,” de Blasio said, before giving an extensive answer that did not really address the question.

“We worked on the bill, we had concerns that some issues in the bill had to be carefully drawn so as to not exclude a lot of other types of activity, for example the effort that was put together to try and get the Democratic convention or any other major economic development opportunity for the city,” he said. “But no, we again, I think we just have a difference...We followed the law, that’s what governs here, the law. We not only followed the law we went to the Conflict of Interest Board to ask for guidance about the proper interpretation of the law and we disclosed all our donors, which you all know, there are many many organizations that do not disclose their donors, including some related to elected officials.”

During the same answer, de Blasio went on to explain the context of the work done by The Campaign for One New York, chiefly in 2014, citing opposition to his agenda from charter-school-backing hedge-fund managers. “I know we did everything right,” he then said, “and it can be looked at all day long and you’re gonna find we did everything right, but it’s not worth the distraction, we’re perfectly comfortable, I’m perfectly comfortable signing the bill.”

Gotham Gazette then clarified the question wasn’t about admission of breaking the law or even conflicts of interest guidance, but about his support for new fundraising regulations on elected-official-aligned nonprofits, asking the mayor, “if you’re now saying these groups should have limits on the fundraising they can do with entities with city business, aren’t you acknowledging that it was a problem to do that [with The Campaign for One New York]?”

“I’m only acknowledging that it became a big distraction, even though everything was done properly and even though we achieved the goals we set out to achieve, which were the pre-K plan and the affordable housing plan, specifically the mandatory inclusionary housing legislation,” de Blasio said. “I have eyes to see if something becomes too much of a distraction you move on and you do other things,” de Blasio added, again giving his latest explanation for why he decided that The Campaign for One New York should be shut down (he originally said it was closing up only because it had accomplished its goals).

While de Blasio did not answer the question directly, his spokesperson provided more clarity by email when asked.

“The mayor believes in public financing and getting money out of politics. But we didn’t have that system, so he played by the rules to ensure that his agenda and his fights for things like pre-k and affordable housing weren't unilaterally disarmed,” wrote Eric Phillips, de Blasio’s press secretary. “He would vote for public financing too, but that doesn’t mean he’ll quit fundraising until such a perfect world exists.”

Gotham Gazette continued to push for an answer about support for the new doing-business fundraising limits signaling at least implicit acknowledgement that the extent to which The Campaign for One New York raised money from entities with city business was inappropriate.

“These bills look to get money out of politics,” Phillips wrote. “Just as public financing legislation would. Both scenarios recognize that it's a better, more inclusive, fair system when money isn't in the equation. It's not a recognition that either scenario - regular contributions or CONY contributions - are specifically, unavoidably or automatically nefarious.”

The question isn’t simply about nefarious intentions or not, it is about real or perceived conflicts of interest or undue influence that large donations to pet causes or campaigns can have on city officials. These are the reasons behind the $400 doing-business limit on candidate campaign donations.

“He’s supporting it because he supports getting money out of politics,” Phillips wrote.

The bill will be discussed further on Wednesday and Thursday at the City Council. Mark-Viverito was in attendance for much of Tuesday’s press conference as de Blasio announced a new program to boost the life sciences sector in New York City. She left before the “off-topic” section of the press conference, where members of the media ask the mayor questions about a variety of issues.

Asked by a reporter from Politico New York whether he has a sense when the investigations into his behavior will be completed, de Blasio said, “I don’t know when it’ll end. I think the people are waiting for answers, certainly, but I don’t know when they’ll end.”