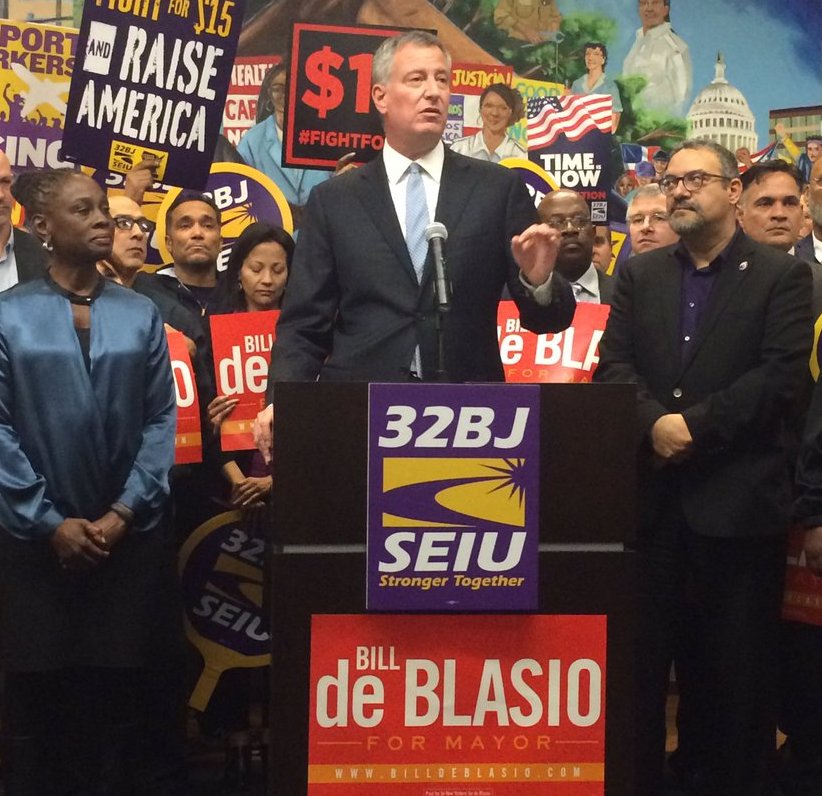 The single largest fine to de Blasio’s campaign, $21,159, is for making impermissible post-election expenditures. The CFB found that de Blasio’s 2013 campaign improperly spent $160,888.45 after the election to 13 vendors; $116,250 of which was spent on Hilltop Public Solutions, the political strategy firm of de Blasio’s campaign manager.

“We strongly disagree with the CFB’s finding,” said Dan Levitan, de Blasio’s campaign spokesperson, in a statement to Gotham Gazette. “The CFB’s own rules would prohibit Hilltop from not charging for this campaign wind-down work.”

CFB ruled that the campaign “failed to provide sufficient explanations and documentation” regarding Hilltop’s role and services as a “general consultant” to the Campaign, and thus failed to demonstrate that the post-election expenditures spent on Hilltop were justified. In August 2015, The New York Post had reported on the eyebrow-raising post-election spending to Hilltop.

At the same time de Blasio’s 2013 campaign continued to pay Hilltop after the November 2013 general election, the newly-created Campaign for One New York, a nonprofit advocacy group started by de Blasio and his allies, began to employ the firm as well. Several of the same strategists who ran de Blasio’s campaign ran the Campaign for One New York, which was shut down amid controversy after taking millions of dollars in donations from entities with city business.

Levitan said the campaign is “pleased that the 2013 campaign audit is now complete,” though they “strongly disagree with many of the CFB’s findings.” De Blasio’s 2017 re-election campaign, which again employs Levitan’s BerlinRosen firm, is already underway, holding fundraisers and even rolling out several endorsements.

No one from the de Blasio campaign appeared before the board to contest the violations, nor did anyone from the Quinn or Ferreas-Copeland campaigns. Brewer, Stringer, and Council Member Vanessa Gibson did send representatives to contest the board’s findings.

Of the 14 campaigns determined to have committed violations, the board determined that nine campaigns are required to repay public funds -- which are issued to match small-dollar private donations to candidate campaigns.

”Today’s determinations reflect the Board’s commitment to safeguarding the public matching funds,” CFB said in a statement. “The $38.2 million that the Board distributed in 2013 helped ensure cleaner, fairer elections in New York City. Every campaign receives a nonpartisan, independent review, and the results encompass a range from technical errors to serious violations."

Quinn was fined $13,611 for eight violations made in relation to her 2013 mayoral bid, including $5,425 for accepting over-the-limit contributions and $3,200 for failing to demonstrate compliance with intermediary reporting and documentation requirements.

Laurence Laufer, an attorney representing Stringer in 2013, and Peter Frank, treasurer of Stringer’s 2013 campaign, appeared before the board to contest three penalties (though they did not contest the board’s findings), asserting that the penalties were too high. Bethany Persky, an attorney for the Campaign Finance Board, dismissed all of Laufer’s arguments, noting that the campaign had “ample opportunity” to respond to the board’s requests accordingly, and that, in regard to intermediary policy, “the campaign is essentially asking the board to rewrite guidelines.”

Four City Council members who won their 2013 elections were fined by the board on Thursday, the same day the Council passed about 20 bills to modify the campaign finance system. Also fined were six candidates who failed to get elected in 2013, many of whom appeared before the board Thursday to give explanations for their violations in an attempt to avoid paying hundreds or thousands of dollars in penalties. The CFB did a significant amount of business Thursday to wrap up much of its final work on the 2013 cycle, just before the 2017 cycle kicks into full gear.

Council Member Ferreras-Copeland was fined $5,718 for eight violations made during her 2013 campaign, most of which stems from failing to demonstrate compliance with reporting requirements for disbursements ($2,000) and failing to file or filing late disclosure statements ($1,850)

Out of everyone the board fined on Thursday, the steepest penalties were dealt to Council Member Vanessa Gibson, who, despite the pleas of a representative, Stanley Schlein, that the “application of the three time expenditure limit” is “draconian” and “so severe that it is disproportionate to the conduct,” now owes $68,639 in penalties for nine violations, as well as $2,225.68 in public funds repayment. Almost all of that $68,639 in fines comes from a $65,574 penalty for exceeding the expenditure limit.

Additionally, Manhattan Borough President Gale Brewer was fined $3,036 for four penalties, $2,600 of which was incurred due to a late response to the draft audit report, and owes $405 in public funds repayment.

Thursday’s meeting marks the final one for CFB Chair Rose Gill Hearn, who had previously announced her intent to leave the board. Mayor de Blasio, in consultation with the Council Speaker, Melissa Mark-Viverito, will nominate a new CFB chair in the new year.

Gill Hearn both praised and criticized the City Council for pushing through two packages of bills that will reform the city’s campaign finance system. While Gill Hearn was pleased to see the Council is finally set to approve a number of proposals previously put forward by the CFB, including a bill to eliminate public matching funds for contributions bundled by people who do business with the city, she expressed disappointment with the fact that the Council has essentially rushed through one package of bills with little time for public review and, according to the board, in need of additional tweaks.

The manner in which the Council and the Campaign Finance Board worked together over a long period of time to “get the details right” for the first package of bills “contrasts sharply with the approach taken for another set of bills the Council also plans to adopt today. These bills were introduced just last month,” Gill Hearn said.

The Council has been criticized for rushing the bills through, and CFB added to that chorus, stating in a press release sent out after the hearing that “the Board continues to believe the remaining bills could have been improved significantly if they were considered on a schedule that allowed more time for deliberation…We believe that some of these bills will have an effect that runs contrary to their stated purpose.”