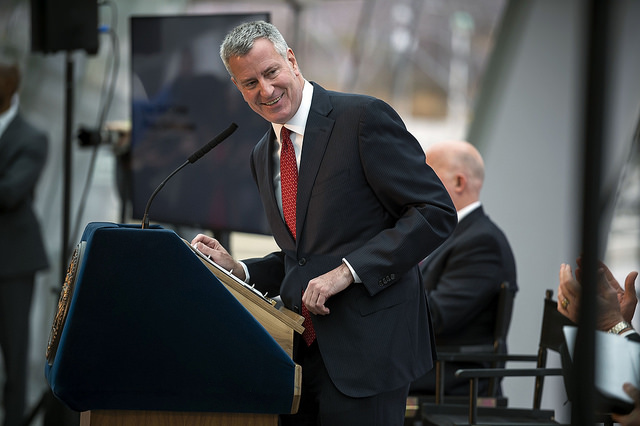 Heading into 2017, his re-election year, Mayor Bill de Blasio moved to eliminate several “distractions,” as he called them, attempting to clean up potentially self-sabotaging messes of his first term so that he can make as clear a case as possible for a second.

De Blasio came under fire -- and law enforcement investigations -- for behaviors that he has largely eliminated in the run-up to his re-election bid. While he can’t make the investigations, and resulting grand juries, go away by changing course, ahead of 2017 he did close his controversial political nonprofits; cut back on meetings with lobbyists; remove his top outside advisor from government meetings; and create a new policy on disclosure of emails with his non-government confidantes.

The mayor continues to maintain that he and his associates did nothing wrong, instead touting his level of disclosure and only acknowledging that he moved away from certain behaviors because they had become distractions from the work at hand.

“I don’t think anything we did was inappropriate,” de Blasio said at a recent press conference when Gotham Gazette provided him with three examples as a pattern of behavior changes and asked if he shouldn’t have been more proactive in holding himself to the new, higher standard.

“I do think they’ve become distractions and I’ve been honest about it,” the mayor said in reference to the Campaign for One New York, meetings with lobbyists, and including consultant Jonathan Rosen in government meetings.

The mayor said that stopping a certain behavior doesn’t always mean acknowledging it was wrong. Sometimes, he said, “you can say practically it just became such a distraction that we’re not going to do it even though we don’t think -- very, very clearly -- we don’t think we did anything wrong at all.”

On the other hand, one ongoing distraction de Blasio has done little to defuse, leaving it on the table for his detractors, is his gym routine, whereby on many mornings he travels from Gracie Mansion on the Upper East Side to his Park Slope YMCA, then to City Hall. The mayor often does not arrive at City Hall until the late morning, a major departure from his two immediate predecessors, who were known for their early arrivals and cabinet meetings. De Blasio is quick to point out that he is constantly working, including from the car and the stationary bike.

De Blasio again gave the tabloids and his critics fodder on Monday when he said it would not make sense for him to use the new Second Avenue subway, which now gives him a subway stop fairly close to his residence, to get to work because he often goes to Brooklyn first.

Candidates who have already started their campaigns to unseat de Blasio regularly cite the mayor’s ethical, legal, and management challenges. The Campaign for One New York, meetings with lobbyists, his gym habits, and more are touchpoints hit in early campaigning by Democrats Sal Albanese and Tony Avella, and Republican Paul Massey.

While in 2015 the mayor addressed a major problem and distraction from real city business of his first year when he started to regularly arrive on-time to events, he has not moved to eliminate the gym distraction. When presented with that discrepancy on social media in September, a top de Blasio aide explained the difference. Eric Phillips, the press secretary, called being late “a process problem, not a worldview.” He added, “One's fixable, the other doesn't need to be.”

“I think he’s lazy and he’s mired in conflicts of interest,” said Albanese, a former City Council member from Brooklyn who’s run for mayor twice before, on NY1’s Inside City Hall.

“When you're the mayor, you're a city manager, you're responsible for all the agencies, and I don't think the mayor is paying any attention to running the city,” said Avella, a state Senator from Queens, during his Inside City Hall campaign-launch appearance.

The gym and other criticisms withstanding, unless there are criminal charges brought against his top aides or the mayor himself, de Blasio is going to be very tough to beat in 2017.

During a soft launch period of his re-election bid, he’s rolled out early endorsements from several labor unions and elected officials. He and his team are focused on securing his Democratic base of white progressives and people of color -- if he can get his base to turn out strong, he’ll be a lock in the primary and a heavy favorite in the general. The city is experiencing low crime and high employment, and de Blasio has instituted universal pre-kindergarten, new affordable housing requirements, and other significant policies.

It is still to be seen which other opponents may emerge, and whether Albanese, Avella, or Massey can show enough campaigning, policy, and fundraising potency to be considered a legitimate threat.

While de Blasio’s 2017 opponents and other critics will continue to point to the “distractions” that the mayor has worked to remove from the equation, de Blasio is likely to maintain that he and his associates did everything above board -- and in the interest of noble causes like pre-K -- and point out that he went above and beyond legal requirements with openness on things like donors to his aligned nonprofits and meetings with lobbyists.

“I have said thousands of times that disclosure is the main street of this whole issue – in all this, everything we’re talking about,” de Blasio told Gotham Gazette last week at the news conference. “We proactively disclosed situations where city-registered lobbyists lobbied me on a city matter. No previous mayor ever did that. We did it proactively. Not because you guys were clamoring for it. We did it because we thought it was the right thing to do. I had done that previously as public advocate.”

“We proactively – not because the law required it – disclosed donations, for example, Campaign for One New York. I believe that if the disclosure is there it is a further guarantee of the public’s ability and the media’s ability to look into the situation. I never felt in any of those meetings that I had that anything was inappropriate because I listened and I’m going to make my own choice. It has nothing to do with whether I know someone a long time or any other fact. I’m going to make the choice I think is right for the people.”

“But it’s all out in broad daylight. So, I don’t think anything we did was inappropriate. I do think they’ve become distractions and I’ve been honest about it. And again I think – I understand why someone might say, well, wait a minute, if you stopped doing something therefore you must’ve thought it was wrong. No. That’s just not intellectually consistent. Sometimes that’s true in life. Other times you can say practically it just became such a distraction that we’re not going to do even though we don’t think – very, very clearly, we don’t think we did anything wrong at all. We thought we did everything appropriately. But why go through the hassle. Let’s just get back to business. So, that’s what was governing our thinking.”