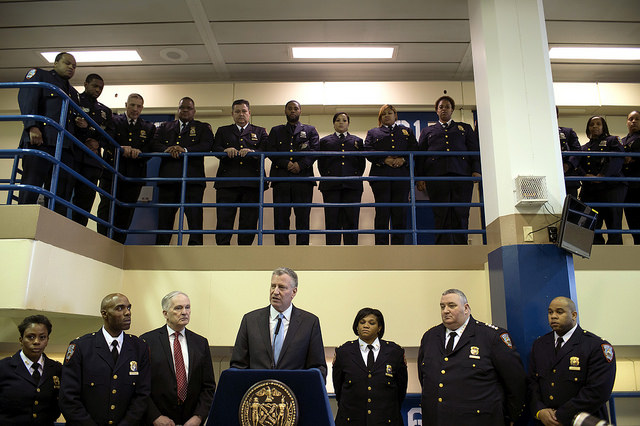 Mayor Bill de Blasio announced Friday that he is putting into motion a planning process to close the jails on Rikers Island. The mayor, a first-term Democrat up for re-election this fall, was pulled somewhat begrudgingly to the politically- and fiscally-tenuous position by City Council Speaker Melissa Mark-Viverito, who called for Rikers to be closed in her 2016 State of the City speech and formed a commission to create a plan to do so. That commission, led by former Chief Judge Jonathan Lippman, is set to release its recommendations at a news conference on Sunday.

"New York City will close the Rikers Island jail complex," de Blasio said Friday at the outset of a press conference at City Hall, which he held with Mark-Viverito and his criminal justice coordinator, Liz Glazer, and Correction Commissioner Joe Ponte.

After news reports about the Lippman Commission plan and support for it surfaced Thursday evening in The New York Post and Politico New York, the mayor decided to hold the Friday press conference. De Blasio and Mark-Viverito both said they had not yet seen the Lippman report, though a reporter from The New York Times was shown a copy, indicating that the mayor and speaker will explore the broad contours of a 10-year, $10-plus billion plan. As de Blasio said Friday, the city will consider the Lippman Commission plan, but then formulate its own, which will involve continuing efforts to reduce the city’s jails population, which has been decreasing over decades and is currently about 9,300 (three-quarters, or 7,500, of whom are on Rikers) and expanding and creating local jails. The latter is likely to cause a good deal of political turmoil in the city.

The mayor and speaker have not decided how many facilities they will seek to open, or what they will do with the city's jails that are not on Rikers, which are home to about 2,400 beds. The mayor said that for the plan to come to fruition over ten years, the total city jail population will need to be around 5,000 and at least two local communities will have to be open to new facilities.

De Blasio, who originally called closing down Rikers jails a “noble idea” but virtually implausible, was privately frustrated by the speaker forcing the issue onto his agenda last year. He came around as the plan was being finalized by the commission, and also after a loud, persistent, and well-organized “Close Rikers” coalition had been protesting outside his re-election fundraisers, publishing op-eds, and accruing support.

On Friday, de Blasio indicated that not only had he needed time to see more of where crime and the jail population in the city were heading during his ongoing tenure, but that Mark-Viverito had been especially persistent. "The Speaker did something extraordinarily important here by looking constantly for a new solution and pushing hard for a path that would get us to this day. And I will be clear, there were many times I could not see that path – and many attempts we made to find a path off of Rikers Island that we did not find effective – but the Speaker kept not only pushing, but offering more and more ideas and more alternatives to help us get there. Her work has been crucial in bringing us to this day."

"[T]he Speaker raised this issue with me – and I have to say – dozens of times over the last few years," de Blasio said during a question-and-answer session with reporters. "We had to do a lot of work to figure out a path that actually could achieve this goal. And my feeling in the beginning was – if I didn’t believe it could be done, I wasn’t going to say it could be done."

The mayor’s decision to back a Rikers closure plan also comes after many years of terrible conditions at the jails on the island, recently cemented in the public discourse throughout 2014, including from the tragic story of Kalief Browder, who was tormented during his jail stay and later killed himself, while no charges were ever brought against him.

There were also in-depth investigative reports of horrific conditions on the island, particularly by The New York Times, including details of violence in all directions involving guards and inmates, and a lawsuit brought against the city by the U.S. Attorney for the Southern District of New York over civil rights violations. De Blasio has indicated that before becoming mayor he did not have a full grasp on how bad things were on Rikers and he has moved a number of reforms on the island, which he has also was long-ignored by his predecessors.

There have been calls to shut down the Rikers facilities for years, including by Neil Barsky, who, in a 2015 New York Times op-ed, argued that “the only way to transform Rikers is to destroy it; it needs to be permanently closed. The buildings are crumbling. The guard culture of prisoner abuse and the gang culture of violence are ingrained. The complex is New York’s Guantánamo Bay: a secluded island, beyond the gaze of watchdogs, where the Constitution is no guide. It is a place that has outlived its usefulness.”

Over time, elected officials like Comptroller Scott Stringer, in late 2015, and City Council Member Dan Garodnick, last week, joined calls for Rikers closure; even Governor Andrew Cuomo began to voice the opinion in recent weeks. The "Close Rikers" campaign, which has many coalition members, has been gaining steam in part based on the strategy and force of the activists involved, led by JustLeadershipUSA's Glenn Martin, who was incarcerated at Rikers and has become a leading national voice on criminal justice reform. He has led protests outside de Blasio fundraising events, which have gotten the mayor's attention. 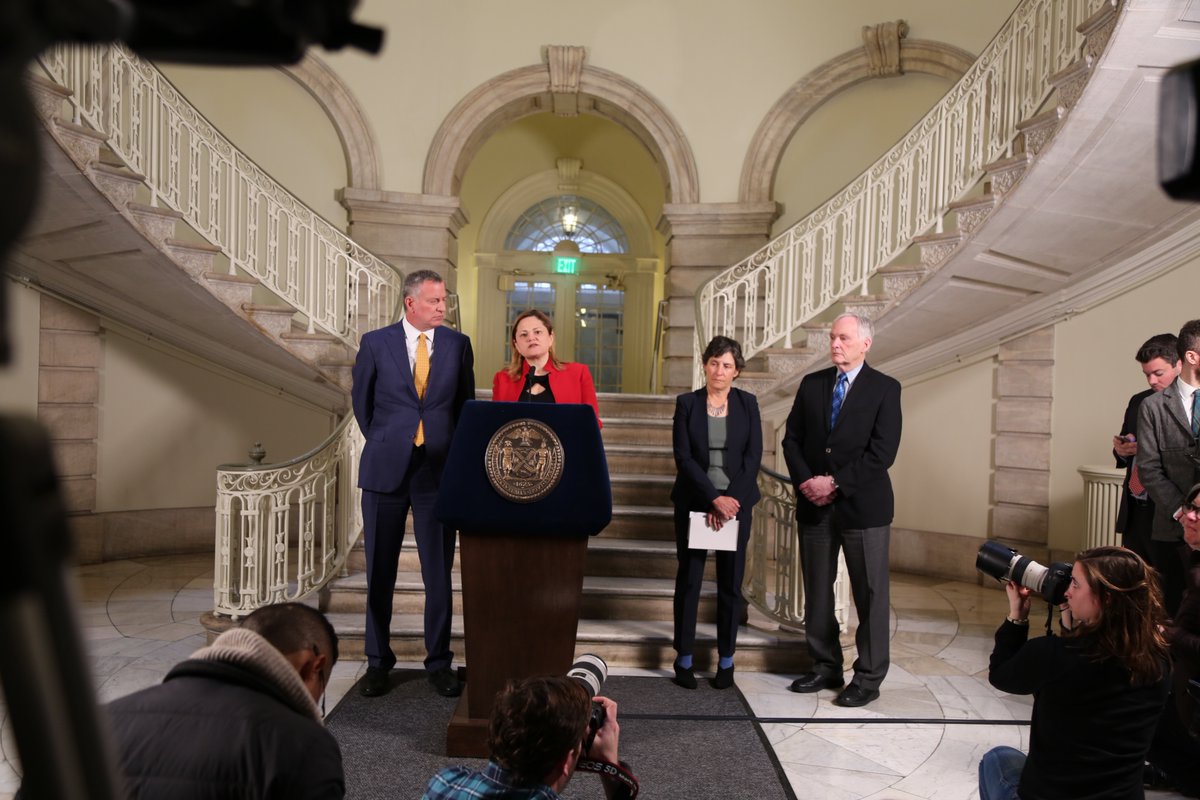 For weeks de Blasio has been saying that he would have more to announce about the future of the city’s jails around the time of his executive budget plan, which is due in May. But, the timeline was sped up.

In her 2016 State of the City speech, Mark-Viverito said, “Our current Rikers-centric system has been plagued by a culture of violence requiring federal oversight. It is also wildly inefficient.” In announcing the Lippman commission, she concluded, “We must explore how we can get the population of Rikers to be so small that the dream of shutting it down becomes a reality.”

De Blasio’s initial public reaction was tepid. On WNYC’s The Brian Lehrer Show just after Mark-Viverito’s speech, de Blasio called Rikers closure is “a noble idea” and said, “we’re going to work with Judge Lippman...to see what’s possible.” While stressing that no matter what the city must continue improving conditions at Rikers in the short-term, de Blasio said of closure, “any proposal like that would take many years to be achieved.” He promised to “look at every alternative going forward. I have to remind people, it could well cost many billions of dollars and we have to prove that we have the money but we’ll certainly work with the Speaker and Judge Lippman.”

Earlier this week, de Blasio announced a new set of education and job-training programs to help those detained at the city’s jails, including a guaranteed temporary job for everyone who has completed a sentence at a city jail. Most of the population at Rikers are pretrial detainees, often those who cannot afford bail, which was the case for Browder. De Blasio and others have been working on bail reform, as well as other efforts to reduce the jail population, which includes a City Council-led effort to move enforcement of many low-level, nonviolent offenses from criminal to civil proceedings.

When making his reentry program announcement on Wednesday, de Blasio highlighted that the city’s jail population is down 18% since he took office, bolstered by a 23% drop on Rikers Island. Still, the complex has been plagued by violence and is notoriously dangerous, expensive, and antiquated.

De Blasio repeatedly stressed on Friday that it will be a long-term plan that could be adjusted. He said a lot will ride on the City Council and the land use process in which individual Council members hold a lot of sway over whether a new facility comes to their district. Mark-Viverito, who is term-limited out of office at the end of this year, promised to fight for the plan into the future. A lot will ride on her successor as Council Speaker, as well as individual members being willing to explore siting a jail facility in their neighborhoods.

“Shuttering Rikers would be an audacious move for Mr. de Blasio,” Barsky wrote in 2015, “who would have to find alternatives for the island’s roughly 10,000 overwhelmingly male, African-American and Latino inmates. This may not be as hard as it might seem, though it would probably involve some new or expanded detention facilities in the boroughs, risking not-in-my-backyard blowback.”

Note: this article has been updated in several places to include information from Friday's press conference and clarify several points.