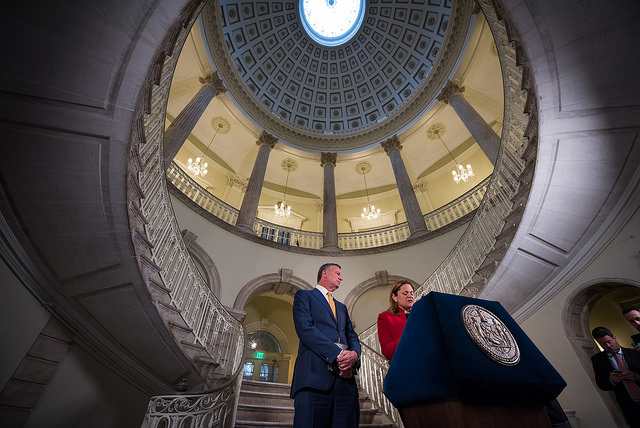 When the Conflicts of Interest Board issued an advisory opinion last week limiting donations to legal defense funds set up by public officials, Mayor Bill de Blasio pointed out that the opinion posed a “potential solution” in the form of new legislation and that similar defense funds have long existed in other jurisdictions. As de Blasio explores how he will pay significant legal bills incurred during investigations into his fundraising and administration, which resulted in no criminal charges, he has said he intends to establish a legal defense fund.

With the COIB opinion now in hand, de Blasio indicated he may indeed engage the City Council on relevant legislation. Such legislation, if introduced, would apparently permit public officials to raise significantly more for a legal defense fund than the Conflict of Interest Board is allowing in its opinion.

The COIB’s advisory sets a $50 limit on individual contributions to a legal defense fund for elected officials, other than donations from family and close friends. As de Blasio racked up legal bills over the past year, he declined to allow any taxpayer money to pay for any of them, while the city had spent $10.5 million on the administration’s defense as of last month, largely in providing counsel to de Blasio’s aides, none of whom were charged either.

It is unclear how much de Blasio owes in legal fees, but the number could easily be in the hundreds of thousands of dollars, if not more. The mayor has repeatedly reminded reporters that he is “not a billionaire” like former Mayor Michael Bloomberg, so he cannot easily afford to pay the bills himself.

“As they’ve indicated, a potential solution is through legislation,” de Blasio said when the COIB opinion was released and he was asked about it at an unrelated news conference. “That’s a perfectly fair possibility. I’m not committing to anything yet because they literally just put it out, we have to think about it, we have to talk to them.”

Along with considering legislation, the mayor also indicated that he would initiate a dialogue with the Board, whose members he nominates, and could point to examples of legal defense funds to make the case for his own. “I don’t know if they looked at the different models that have been used around the country, I just don’t know. We want to have that conversation first and others who are interested should have the conversation as well. And then we’ll see what it means,” de Blasio said.

A mayoral spokesperson did not respond to a request for details of which legal defense fund examples the mayor was referring to or whether he would be reaching out to the City Council on possible legislation.

There are legal defense funds from across the country, and even closer to home, that the mayor can point to, potentially as models for the city and thus, his case.

Council Member Deborah Rose, from Staten Island, used a legal defense fund for her 2009 campaign committee in facing criminal charges of violating election laws. Rose did not personally face charges, and the charges against the campaign committee were eventually dismissed. The fund was also restricted by the rules that apply to campaigns -- requiring the same contribution limits as a City Council campaign and having to disclose its donors to the COIB twice a year.

Former Democratic state Senator Hiram Monserrate, of Queens, who was expelled from the chamber in 2010 after being convicted of assaulting his girlfriend, set up a similar fund when fighting the charges. He faced widespread criticism for accepting contributions from lobbyists and their clients, which the state’s Legislative Ethics Commission found may have violated state ethics law. The contributions were not publicly disclosed.

Joseph Bruno, the former Republican Senate majority leader, used a legal defense fund to successfully fight his conviction on two felony fraud charges. He created the fund after he was indicted in early 2009 and brought in donations nearing $1 million. In 2004, former state Senator Guy Velella, a Bronx Republican, also created a legal defense fund to fight federal bribery charges. The fund was shut down soon after, facing pay-to-play allegations.

Although New York state does not have legislation around legal defense funds, other states have passed laws that regulate an elected official’s legal defense spending. For instance, Michigan passed the Legal Defense Fund Act in 2008 that requires regular reports of contributions and expenditures related to an elected official’s defense against criminal, civil or administrative action that directly concerns their conduct in office.

Legal defense funds were created in California in 2000 through a ballot proposition. Between then and 2007, the Los Angeles Times reported, nearly a dozen elected officials created legal defense funds. Then, near the end of 2007, after state Senator Ron Calderon had used a legal defense fund from an election recount to raise and spend private funds, the state’s Fair Political Practices Commission established stringent guidelines for such funds to prevent misuse.

In Oklahoma, the state Ethics Commission changed the rules so that, after 2015, officials could no longer utilize campaign funds for legal expenses and would have to set up separate legal funds for such purposes, Jennifer Palmer of Oklahoma Watch reported. In February this year, the first fund of this kind was set up by the State Superintendent of Public Instruction Joy Hofmeister to fight charges of evading campaign finance laws.

“I have very little doubt there would be support for legislation of this nature” in the City Council, said Sarah Steiner, an election lawyer. “It could be done in a way similar to the way Congress does it.”

In the U.S. Congress, the Office of Governmental Ethics has established mechanisms for legal expense funds that are set up as trusts under an independent trustee who monitors its fundraising. These funds have to first be approved by the ethics committee of the relevant chamber of Congress, and the trust must file quarterly reports with the office of the clerk. Both houses have similar but varying regulations for such funds. For instance, the House limits contributions to $5,000 for the year for a legal expense fund while the Senate has set $10,000 as the annual contribution limit. OGE also regulates legal expense funds for the executive branch.

If the New York City Council were to pass a similar law, Steiner said, “There would have to be an oversight body to promulgate regulation.”

She said that legislation is an “appropriate option” since the COIB’s opinion has broader implications. “Any Council member that finds themselves investigated for any reason would find themselves personally liable,” she said. “All of a sudden, they would personally be looking at tens of thousands of dollars in fees with no recourse.”

It remains to be seen if the City Council will be open to authorizing legal defense funds. And, legislation can take months, if not years, in the Council and any proposal around this issue is likely to be controversial. Some members have already expressed wariness, as have good government groups.

“Legal defense funds should not be the answer in any case,” said Dick Dadey, executive director of Citizens Union, a reform group. “With [the mayor’s] particular situation, the city should just pay his legal bills. We should be done with it and move on. The larger issue of future cases should be discussed but legal defense funds should not be on the table.”