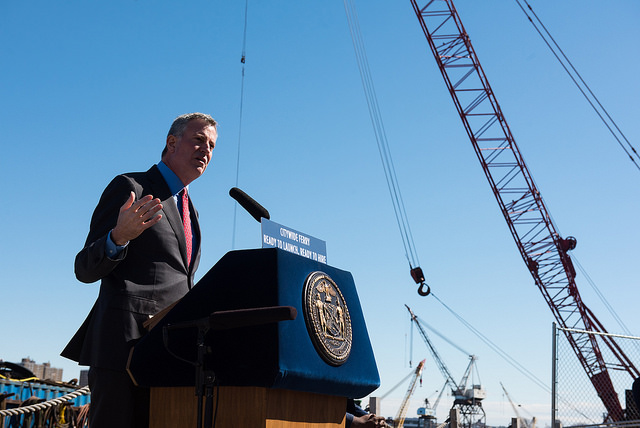 Manhattan District Attorney Cy Vance recently concluded his investigation into the effort by Mayor Bill de Blasio and his aides to funnel campaign funds to Democratic state Senate candidates in 2014. Vance did not bring any charges in the case, writing in a ten-page letter to the state Board of Elections enforcement counsel Risa Sugarman, who had referred the case for prosecution, that “the parties involved cannot be appropriately prosecuted, given their reliance on the advice of counsel.”

But, Vance’s decision did not entirely vindicate the mayor. He criticized de Blasio and his team for their actions that “appear contrary to the intent and spirit of the laws,” and also wrote that his decision “does not foreclose the BOE or others from pursuing any civil or regulatory action that they determine might be warranted by these facts; such a remedy might well provide guidance to those involved in the electoral process.”

Vance’s investigation -- which ran parallel to a federal investigation of the mayor’s fundraising and City Hall behavior that also concluded with no charges filed -- delved into whether the mayor and his aides had solicited and directed campaign contributions far in excess of election law limits to individual candidate committees, using county committees as intermediaries.

At the behest of de Blasio and his associates, large donations were made to county committees, which can receive up to $102,300 from an individual, union or LLC, instead of directly to candidate committees, which can receive a maximum of $10,300. County committees can give unlimited funds to candidate committees. The money was funneled to a handful of Democratic candidate campaigns in swing districts, and largely used to pay hefty consulting fees to firms with close links to de Blasio, including BerlinRosen, AKPD, and Red Horse Strategies.

Vance’s office could not make a case for prosecution beyond a reasonable doubt, in part because of the legal advice de Blasio and his team had received that gave them the go-ahead for their maneuvers. But the BOE has a lower burden of proof for its own enforcement actions, which include civil penalties reaching thousands of dollars.

Under state election law, the BOE chief enforcement counsel could potentially refer a case to a hearing officer who could then determine whether “based on a preponderance of the evidence” an individual, on behalf of a candidate or campaign committee, had committed violations of the law. Based on the hearing officer’s report, the case could be settled out of court or the enforcement counsel can initiate a special proceeding in state supreme court to obtain a civil penalty.

“The Board of Elections now does have the opportunity to determine whether or not there was a violation of the rules governing campaign activities,” said Dick Dadey, executive director of Citizens Union, a government reform group that has long called for closing holes in election law. “It is up to them now to determine whether there was a violation of the rules and whether or not to determine fault and to assign penalties based on this investigation.”

Vance’s investigation found that individual contributions and transfers complied with regulations. But viewed as a whole, they showed a pattern that implied a coordinated effort to circumvent the law. “The flow of money from donor to county committee to campaign committee to consultant often occurred within days,” the DA’s letter to the BOE reads. “In most cases, the time from donation to payment of a consultant invoice was so short that the only reasonable conclusion is that the Coordinated Campaign had pre-determined the ultimate recipient of the funds at the time the donation was solicited.” (The “Coordinated Campaign” referred to de Blasio’s team.)

The DA’s conclusions were similar to those that had spurred Sugarman’s referral.

Vance noted, for instance, that the Putnam County Democratic Committee received just over $671,000 in contributions in 2014, and within days transferred more than $640,000 to authorized candidate committees of Terry Gipson and Justin Wagner, two Democrats attempting to swing Senate seats. The most contributions that the PCDC had received in the previous five years was about $39,000 in 2012. The two committees associated with Gipson and Wagner “almost immediately expended virtually all of the funds on political consultants,” Vance wrote.

When the BOE’s letter referring the matter for prosecution leaked in April last year, the mayor alluded that it may have been politically motivated. Sugarman, the enforcement counsel, is an appointee of Governor Andrew Cuomo, who has a long-running feud with the mayor. At a news conference, the mayor said, “In this instance, there is an obvious question mark around that memo that was leaked to the press and real questions about motivation and obviously huge questions about accuracy in terms of the law.”

At a news conference on March 17 of this year, when Gotham Gazette asked if he was concerned about the matter being referred back to the BOE and his prior allusions about it being politically motivated, de Blasio refused to comment. “I’m not going to speak to that,” he said. “I think what I’ve said in the past speaks for itself.” De Blasio’s campaign spokesperson declined to comment for this article. The mayor has all along insisted that he and his associates acted ethically and legally, and de Blasio disputed Vance's characterization that his team violated the spirit of the law.

“I don’t think there’s any lack of will” for civil and regulatory action by the BOE, said Sarah Steiner, an election lawyer. Steiner did not address the de Blasio case in particular, but she said, “If there was a referral to a prosecutorial agency and then it was kicked back to the Board of Elections, we would have no way of knowing [its status] because it is confidential.”

She also said that routine criminal prosecutions by the BOE are “fairly new” and have not been “well executed.” She added, “I don’t think their discretion is well used.”

The enforcement counsel position at the BOE was created in 2014 as part of a deal on ethics reform between Governor Andrew Cuomo and state legislators, part of the governor’s controversial decision to shut down the Moreland Commission to Investigate Public Corruption. (This decision was itself investigated by U.S. Attorney Preet Bharara’s office, which determined it had not found sufficient evidence to charge Cuomo or his associates with a crime.)

It’s unclear whether the BOE will indeed move forward with any enforcement procedures in the de Blasio matter, or who the target of that enforcement would be. BOE’s Sugarman did not respond to requests for comment.

After an Inspector General for the BOE identified John Conklin, a Republican BOE spokesperson, as the source of the leak, Sugarman and Cuomo both called on the mayor to apologize for his remarks. “Allegations were made primarily by the New York City Mayor that I leaked the report due to political motivations,” Sugarman told the New York Post, in a statement. “Now that we know the facts, I hope the mayor will apologize for maligning my integrity and professionalism.”

De Blasio never apologized and stood by his remarks, which he again confirmed in recent weeks.

The election law states that a person who wilfully accepts illegal over-the-limit contributions would be required to repay the amount that exceeds contribution limits, and can face a civil penalty equal to that excess amount and an additional fine of $10,000. But, in de Blasio’s case, the candidate committees that benefited from the campaign contributions were not known to be the subject of investigation and appear to have acted within the law in receiving hundreds of thousands of dollars in campaign contributions from county committees.

“I’m not sure what the Board could do,” Dadey said, “but it’s important that they at least review the analysis of the investigation conducted by the district attorney.”