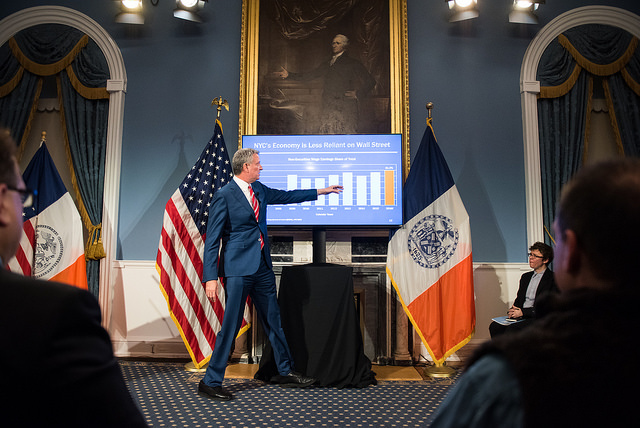 Nearly $200 million more in spending and $587 million in savings were added to the budget for the 2018 fiscal year in Mayor Bill de Blasio’s latest iteration of the city’s spending plan released on Wednesday.

The mayor presented an $84.86 billion executive budget, which increased proposed spending from the $84.67 billion proposed in the preliminary budget in January. The new spending is targeted at early childhood education, job creation, veterans services, anti-eviction legal services, and other areas. The mayor also unveiled an updated version of the city’s ten-year capital plan, which he added more than $5 billion to from January in order to fund more affordable housing and infrastructure projects.

De Blasio framed the need for the new initiatives in now-familiar language about the city’s affordability crisis and maintaining the city’s core commitments to New Yorkers amid uncertainty over proposed federal funding cuts under the Trump administration.

“This budget continues the work we started four years ago, recognizing that for so many people in this city, it is still a great challenge to make ends meet,” de Blasio said. “We’re trying everywhere we can to relieve those burdens and make it easier on our people to live a good life in this city.” The fundamental goal of his budget proposal, he said, was to make sure the city is both stronger and fairer in the future.

De Blasio and the City Council will now continue budget negotiations, including another round of Council hearings, before a final deal is reached ahead of the July 1 start of the new fiscal year. It is the final budget of what de Blasio hopes is the first of two terms; the Democratic mayor is seeking re-election this fall.

A number of new investments were outlined Wednesday, several of which had been announced in the lead up to the executive budget. These include an expansion of the successful universal pre-kindergarten program to some three-year-olds in the city at an initial cost of $36 million in fiscal year 2018, increasing to $177 million in fiscal year 2021. The proposal is expected to save eligible families $10,000 annually, and provide $2,400 in additional income every year to one in four families, the mayor said. On Tuesday, the mayor had announced that the city would begin installing air conditioning in all city classrooms, which will cost $28.75 million over the next five years.

Under the ambit of promoting affordability, particularly in the housing market, the mayor spoke of various funding allocations in the 2018 operating budget and longer term capital funding commitments (which are largely paid through debt incurred from borrowing and raising funds). These included a $1.9 billion capital investment to provide affordable housing for seniors and low-income New Yorkers, by adding 10,000 affordable units for households making up to $40,000 a year. Of these, 5,000 units will be dedicated to seniors and 500 to veterans.

De Blasio also touted full funding for anti-eviction legal services for low-income New Yorkers, along with legal counsel for tenants in housing court, which will cost $93 million each year.

The executive budget also includes $355 million to repair facades at 150 public housing developments, which will supplement the $1 billion he announced for NYCHA roof repairs in the preliminary budget.

The massive increase in capital investments add up to $6.25 billion more than the preliminary budget’s proposed capital expenditure, bringing the city’s ten-year capital plan spending to $95.85 billion through 2027.

Among the initiatives to promote affordability are investments in job creation, including $12.8 million for the next three years to train 3,000 New Yorkers in construction jobs in the green economy. There’s also $136 million for the Made in New York campus, a hub for the garment, film and television industries that will create 1,500 jobs and will open in 2020 in Brooklyn.

“We know we cannot invest in everything, but we have to invest where our dollars will go the farthest, where we will have the biggest impact for the money that we spend,” de Blasio said.

Other new planned investments are aimed at public safety and improving quality of life in the city. The administration will put $6.9 million towards a citywide initiative to combat domestic violence. The NYPD will receive $700,000 to expand ShotSpotter technology, which uses audio sensors to detect gunfire in real-time, in the Bronx, Manhattan and Staten Island. The mayor touted a $16 million investment in legal services funding for immigrants facing deportation and other related challenges. And $38 million in fiscal year 2018 will be allocated to HealingNYC, the city’s initiative to reduce opioid overdose deaths by 35 percent in five years.

Quality of life initiatives include a $100 million investment in the Manhattan Waterfront Greenway, to construct an esplanade along the East River, and $1.8 million for 14 sidewalk-cleaning trucks under the CleaNYC program. The city will even expand curbside e-waste collection services to the Bronx, Brooklyn and Queens over the next three years, after an initial pilot on Staten Island and expansion soon throughout that borough and part of Brooklyn.

The mayor noted risks in the budget from the federal government, as well as both positive and negative impacts from the recently passed state budget.

For instance, $53 million in proposed cuts by Governor Andrew Cuomo to senior centers and health services did not ultimately go through. The state budget also allocated $200 million for NYCHA and another $200 million in water infrastructure funding for the city. However, the state did shift $68 million in costs to the city for foster care and special education services, and did not give the city the authority to use design-build in infrastructure projects, which de Blasio said could have potentially saved the city $450 million. He promised to continue to fight for design-build authority.

But the mayor was confident in the city’s ability to manage challenges as they arose, particularly as it concerned the federal budget, cuts in public housing grants and proposed cuts in anti-terror funds for the NYPD. When asked how he could justify the increased spending in the budget, de Blasio emphasized that the unprecedented uncertainty emanating from the White House would not give the city pause, particularly since proposals that would have been damaging to the city have so far failed -- including the Trump administration’s executive order on immigration from certain Muslim-majority countries, another order cutting federal funds for sanctuary cities, and the attempted repeal of the Affordable Care Act.

“We came to a strategic assumption that we think is the right one, that if you have no idea where something is going and no one else does, it’s dangerous to start making decisions based on that reality,” he said. “And It’s counterproductive because it will stop us from making investments that we may need to make that we believe in.”

“We’re just not gonna be paralyzed by uncertainty, we have to keep investing,” he added, stressing that the city has multiple opportunities in the year to modify its budget and ample rainy day funds to meet funding deficits in real time. “We can slow down spending, we can speed up spending..we have a lot of latitude,” he said. “So if we see a danger, we can start acting on that danger very quickly.”

The city has indeed set aside considerable funds in reserves and identified a good deal of savings. Reserves are at the highest in the city’s history, a fact that de Blasio has touted in part to justify increased spending. The city’s general reserve holds $1 billion each year, the Retiree Health Benefits Trust fund holds another $4 billion, and the Capital Stabilization Fund, created under de Blasio, is set to hold $250 million each year for the next four years.

Between the November update to the current fiscal year 2017 budget and Wednesday’s proposed executive budget for 2018, the city found $2.8 billion in savings. That includes $700 million in savings identified this year, with $587 million coming from agency savings, surpassing the mayor’s promise in January that agencies would identify another $500 million in efficiencies in time for the latest spending plan.

Separately, the city projects $1.3 billion in sustained healthcare savings each year through the labor union contracts signed by the administration, mostly in 2014 and 2015. The mayor also announced a partial hiring freeze of certain managerial and administrative staff, and said that by the time the adopted budget passes, the Office of Management and Budget will be able to put a number to how much that will save the city. The government workforce has increased by tens of thousands of employees under de Blasio, but he is now promising to not fill some middle- and upper-level agency positions that are vacant or become vacant.

The City Council, in its response to the preliminary budget released early in April, called on the mayor to increase savings without cuts to essential services, while also pushing certain targeted investments. On Wednesday, City Council Speaker Melissa Mark-Viverito and Council Member Julissa Ferreras-Copeland, chair of the finance committee, commended the administration for incorporating some of their prior recommendations and funding additional support for NYCHA, legal services for immigrants and air conditioning for classrooms.

Yet, Mark-Viverito and Ferreras-Copeland, on behalf of the Council, remained concerned that the budget didn’t go far enough in certain areas, and said in a joint statement that the administration needs to “take additional steps to strengthen vital City services.” They noted in particular that the mayor did not increase reserves, “which is an important measure under the current national political uncertainty,” they said and that senior services remained unfunded as did slots for the Summer Youth Employment Program.

“The Fiscal 2018 Executive Budget is a good starting point and we look forward to working with the Mayor in the coming weeks to negotiate a budget that protects our vulnerable communities and uplifts families across the City,” they said.

Although the city’s financial management and ample savings and reserves have been generally praised by fiscal monitors and ratings agencies, the mayor has received criticism for ramping up spending so drastically and growing the size of the municipal government. Under de Blasio, the city’s budget has added $12.2 billion in spending (assuming the adopted budget will reflect the excutive budget's $84.86 billion), a 17 percent increase from the final budget under former Mayor Michael Bloomberg, which stood at $72.7 billion when it was modified in November 2013.

The Citizens Budget Commission, a nonprofit fiscal watchdog, reiterated this criticism on Wednesday, pointing out that spending increases were not matched by increased reserves and that budget gaps were growing down the line. The group also criticized the dramatic increase in the capital budget. “In an atmosphere of political and economic uncertainty,” the CBC said in a statement, “the New York City Executive Budget for Fiscal Year 2018 should have exhibited more spending restraint.”