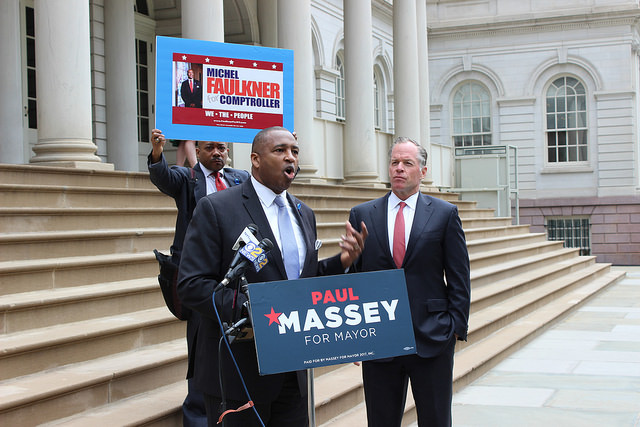 Michel Faulkner is tired of career politicians and he doesn’t believe elected experience is necessary to run for one of New York’s citywide offices. Faulkner, the pastor at the New Horizon Church in Harlem and once a defensive lineman for the New York Jets, is running as a Republican for the office of Comptroller, the city’s chief financial officer.

In an hour-long interview at City Diner on Manhattan’s Upper West Side, Faulkner, 60, explained his decision to run for Comptroller and how he believes his experience in the private sector trumps what incumbent Comptroller Scott Stringer, a Democrat, has brought to the office. “There was a need,” Faulkner said, “and I can help the city as Comptroller in a significant fashion.”

Faulkner was, until two weeks ago, vying for the Republican nomination for Mayor but dropped out soon after Assemblymember Nicole Malliotakis launched her own mayoral candidacy. The GOP mayoral nomination has all but become a two-horse race now with Malliotakis and millionaire real estate executive Paul Massey appearing to be the most viable contenders. There was no GOP candidate for Comptroller until Faulkner dropped to the race.

[Related: GOP Mayoral Primary Appears To Be Massey Versus Malliotakis]

Malliotakis’ entry into the mayoral fray forced Faulkner to rethink his own campaign, he said. At first he was expecting her support, but instead she became a competitor. “And I looked at the whole idea of what we want to do as Republicans,” he said. “We want to advance the two-party system. We want to have electable people who have good ideas to move things forward. And in New York City, we wanna create a competitive market for those ideas.”

Faulkner quickly endorsed Massey for Mayor and Massey endorsed his campaign for Comptroller in return -- the two held an at-times awkward press conference at City Hall on May 15. Faulkner also said that Malliotakis, a 36-year-old Staten Islander, doesn’t have the “life experiences, in my opinion, that would make her a mayoral elected candidate now. In the future, sure, but not right at this moment.”

“I made the decision that the team needed something to happen,” he said of his candidacy for Comptroller. Faulkner has also had trouble raising significant funds for his mayoral bid, loaning his own campaign tens of thousands of dollars; a move to Comptroller is expected to significantly improve that dynamic.

Although Faulkner has called Scott Stringer a friend (Stringer was Faulkner’s local Assembly member at one point, he’s said), he faulted the incumbent Democrat for playing it safe on the political field. “I was hoping that Scott was going to run [for Mayor], if his objections were valid or his distance from de Blasio was valid, he would’ve run,” Faulkner said, referring to the long period of time during which Stringer was considering a primary challenge to Mayor Bill de Blasio. “But he chose rather the safe route...I’m sorry but that’s a political answer when we need a dramatic difference in the way things are being done.”

For Faulkner, Stringer’s biggest failings have been not keeping de Blasio in check, in effect sitting aside while the budget ballooned to nearly $85 billion and not advocating strongly for taxpayers.

“Here’s the problem,” Faulkner said, “We’re spending more and getting less bang for our buck. There are so many inefficiencies in the way we are spending our city dollars. I can help the city tremendously by simply enforcing what we already have on our books. By making audited reports understandable for average New Yorkers and by giving New Yorkers an opportunity to know what’s going on with their dollars, because everybody cares about their tax dollars. We just don’t get a chance to say much about it because we think it’s not going to help.”

Faulkner has employed a literal “watchdog” analogy to the comptroller’s office before, and drove home the point again. “We hear no growls, no biting certainly,” he said of Stringer.

The criticism of Stringer appears a bit overstated given how the comptroller has approached his job for the past three-plus years. Stringer, although a Democrat like de Blasio, has been consistently critical of the mayor and his agencies. In dozens of reports and fiscal audits, Stringer has identified weaknesses in the de Blasio administration and recommended reforms. His office has covered everything from the city’s low level of investment in Minority and Women Owned Businesses (M/WBEs) and the sharp increase in homelessness spending to the costs of snow removal. Just this week, he released an audit of the Department of Education’s implementation of high speed internet in middle schools, finding that the DOE did not maintain documentation that would show whether the project was completed on time or within its budget. Stringer was also a vocal critic of the Campaign for One New York, de Blasio’s political nonprofit, calling it a “slush fund” shortly after de Blasio had been criticized by the Campaign Finance Board for how the nonprofit raised and spent funds.

Although Stringer has not been especially vocal in questioning the rapid increase in expenditure under de Blasio, he puts out his own easy-to-read analysis each year of the mayor’s budget and has advocated for increased savings, insisting that the city must maintain an adequate “budget cushion” to weather a potential economic downturn. He has also hosted numerous town halls and local speaking engagements to directly communicate with New Yorkers across the boroughs. “New Yorkers know they can count on Scott Stringer's independence and effectiveness - plain and simple,” said Ilana Goldman, Stringer’s campaign manager, in an email. “He will continue to hold government accountable and be the progressive voice on the critical issues facing the city. We welcome Michel to the debate.”

Perhaps a result of his outspoken nature, Faulkner believes the Comptroller should be a constant, vocal, independent advocate on behalf of taxpayers. “So I may not be able to increase the number of charter schools, for instance, which is the mayor’s purview,” he said (incorrectly, charter schools are authorized through the state), “but I can say, ‘This is a report on how the schools are running and what the schools are or are not doing...That’s the independent voice. You’re doing a comparison analysis, you’re doing risk analysis...You’re providing really literally the business analysis of how the city is doing business. We don’t see that. I will bring that to the table.”

It was not clear exactly what Faulkner has reviewed from Stringer’s office or what specifically he thinks Stringer is not doing that the incumbent is in fact not putting forth. At the cross-endorsement press conference with Massey, Faulkner indicated he was just starting to dig into a review of Stringer’s output given his shift to the race.

Other than fiscal audits, the city Comptroller is also the fiduciary for the City’s five public pension funds, worth about $160 billion in assets. The Comptroller also reviews city contracts and resolves claims for and against the city. Enforcement of prevailing wage and living wage laws also falls under the office’s purview.

Faulkner believes he is prepared for the role. He touts his own experience running nonprofit groups such as the Institute for Leadership, which ran a statewide diabetes awareness campaign in 2009. He spoke of his experience working under former Mayor Rudy Giuliani on an NYPD police-community relations task force and of his time as a commissioner on the City Charter Review initiative. He also co-chaired a Board of Education task force on HIV/AIDS. Between 2002 and 2004, Faulkner ran programs in the United States for World Vision, an international evangelical aid organization. He founded the New Horizon Church in 2006 and also ran a company called Over the Hump Resources LLC which provided aid to small businesses for the last three years.

“There’s something to be said about having worked in the private sector,” Faulkner said. “Those private sector experiences that you bring to the table give you a perspective that help shape your thinking. Scott [Stringer] doesn’t have that...I’m talking about solutions. Every city agency is audited by the Comptroller. When the audited reports come out and it’s inefficient, it’s obvious that something ain’t working, suggest ways to fix it. I’ll suggest ways to fix it.”

“My job as Comptroller is to help us spend money wiser, to spend it better according to city laws,” Faulkner added, “and to help New Yorkers feel like their money isn’t running away from them.”

It’s hard to say how Faulkner’s campaign may be received by the electorate leading up to the November election -- at this time, Faulkner and Stringer are running unopposed in their respective primaries. Faulkner is socially conservative and a vocal supporter of President Donald Trump, who is deeply unpopular in his hometown of New York City. He voted for Trump last year, though he also said he voted for Barack Obama in 2012, and he insists that he isn’t supportive of every Trump policy or proposal. He is a Republican in a city where Democrats have a 6-to-1 voter enrollment advantage. In 2013, Stringer won the office of Comptroller with 80 percent of the vote against little-known Republican John Burnett and a few “third party” candidates.

Faulkner opposes New York’s sanctuary city status and doesn’t agree that low-level non-violent criminal offenses should be treated with civil penalties, which is a key initiative of the current administration and City Council. So far, he’s continued to mostly focus on criticizing de Blasio, with some initial jabs at Stringer. His campaign website has no policy proposals or statements.

Faulkner’s core constituency, he said, is “the forgotten, the disregarded,” including the African-American community, the Latino community, and poor and middle class New Yorkers. He has often focused on some of the egregious conditions plaguing the New York City Housing Authority, NYCHA, which is home to about half-a-million New Yorkers.  “Because just like President Trump talked about...their voices aren’t being heard,” he said.

But he believes that, just like Trump, he can appeal to voters with the “truth and sincerity” that he brings to the equation and that, again like Trump, experience in elected office is not a necessity to run for Comptroller. “I think we’ve reached a day and a point where career politicians aren’t doing it anymore,” Faulkner said. “We’re seeing the same problems over and over and over. So the person who has held elected office after elected office and government position after government position, doesn’t necessarily manage the city’s or the nation’s affairs well. We need different models.”