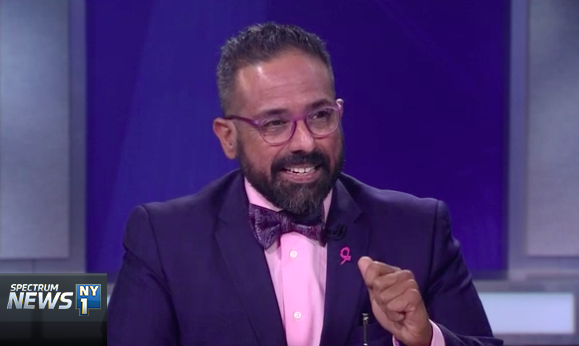 “I had to travel the city and try to get enough support from my party to get the nomination,” Polanco said in an interview with Gotham Gazette. “Now I’m going to start moving from meeting party leaders, county leaders to talk with groups across the city.”

Acknowledging the challenge of running citywide as a Republican given the significant registration advantage held by Democrats, especially considering the incumbent, Democrat Letitia James, is seeking reelection, Polanco said, “I’m a New York Republican, I’m very different.” He cited his focus on economic development, NYCHA residents, and charter schools. Polanco has also been critical of Donald Trump, the unpopular president Democrats across the city (and country) are looking to tie Republican candidates to in most elections.

“The odds are not in my favor given the daunting party registration numbers. But I’m up for the challenge,” Polanco said. “Competition is good.” It’s now about running an energetic campaign and talking to people all over the city about his agenda, he added.

And what’s on that agenda? “At the top is to reform city government, including the public advocate position,” he said. “It’s an important position, it’s supposed to be the watchdog, but it’s been watered down.” Polanco wants to empower the public advocate through a city charter amendment giving it “investigatory powers.”

Even without those powers, he said James has not been forceful enough in checking Mayor Bill de Blasio, a fellow Democrat who James is close with and has endorsed for reelection (de Blasio is sure to return the favor). While James has focused her tenure on passing legislation and filing lawsuits against the city to enact change, she has not been critical of the mayor on several major items, including questionable ethical choices.

Polanco, a former president of the City Board of Elections and a one-time challenger of state Senator Jeff Klein when Klein was in the Assembly, enters the race all but assured of an easy path to the general election. He joined Errol Louis on NY1’s Road to City Hall June 6 to formally announce his bid.

“The far left have a monopoly on the conversation in New York City, and I could just not sit back and watch this happen for another election cycle,” Polanco told Louis. “And I saw the Public Advocate position as a perfect vehicle. I think the Public Advocate position is the perfect place for a visionary like myself to come in and talk to voters and talk to the city and get things done and have a conversation about important things that are not being discussed today.”

Since losing funding under Mayor Michael Bloomberg and the City Council, the public advocate’s office has “become more of a press mill, a place where you just issue press releases and take positions,” Polanco said. He wants the position to have investigatory and subpoena powers so it can demand information from City Hall.

Polanco also said he would push for more charter schools in New York City, and with the help of Eva Moskowitz, the lightning rod CEO of the Success Academy charter network and a former member of the City Council. Moskowitz has had an antagonistic relationship with de Blasio.

Further, Polanco wants to see public housing tenants have the chance to own their units. He claims that this would unlock the “American Dream” for these residents, and would reduce crime in housing authorities.

At age 25, Polanco attempted in 2002 to unseat Klein, but was unsuccessful despite endorsements from then-Mayor Bloomberg and then-Governor George Pataki. Klein later won his Senate seat, and is now one of the most powerful people in New York as the leader of the breakaway Independent Democratic Conference (IDC).

Polanco was later appointed Bronx Commissioner of the Board of Elections, and selected to be the city’s Board of Elections President. He is currently a professor of Latino studies and history at the Borough of Manhattan Community College and a political consultant, along with his job for the Assembly minority.

While Public Advocate James is seen as a heavy favorite to win reelection, it has been unclear whether she would see serious competition -- Polanco’s entry into the race has Republicans excited. During his exploratory phase, he received several endorsements for the race from county party organizations, and he now has the backing of the Republican Party affiliates of all five boroughs. He has also been endorsed by the Reform Party and is seeking to get on the Independence Party line as well.

Asked for a response to Polanco’s entrance to the race and some of his early campaign arguments, James’ reelection campaign sent a statement saying the public advocate “has been a powerful champion for working families and the most vulnerable New Yorkers,” and touting her accomplishments. “Tish has passed historic wage equity legislation to ban the use of salary history in the hiring process; successfully championed NYPD body cameras; led the fight for universal school lunch; and used the Worst Landlords List, legislation, and litigation to hold bad landlords accountable,” the statement says.

“We support everyone's right to run for office and welcome them to put their ideas forward,” the campaign statement says. “We're especially glad that J.C. Polanco is joining Tish's efforts to further empower the office through measures like a charter revision."

Polanco is an ally of Republican mayoral candidate Nicole Malliotakis, having donated $50 to her campaign and speaking fondly of her in comparison to her main primary rival, Paul Massey. Polanco told Gotham Gazette in May that Malliotakis “brings this across-the-city sort of understanding of New York City Republicanism” to the race for mayor, while Massey, on the other hand, is “someone that has the experience in business, that is raising enormous amounts of money and is also making the rounds, something that many New York Republicans are used to: the businessman Republican. So you’re gonna have a battle for the heart and soul of the Republican Party in New York City.”

In the interview after announcing his candidacy, Polanco told Gotham Gazette that he is endorsing Malliotakis for mayor. “I’ve known her for a long time, worked closely with her,” Polanco said of Malliotakis, who is a member of the Assembly minority where Polanco works. “I don’t know Massey.” He said he also does not know Republican candidate for comptroller Michel Faulkner, but will get to know him. (Massey and Faulkner have endorsed each other.)

Speaking to the Queens Village Republican Club recently, Polanco argued that the public advocate’s role should be expanded.

“You need to be a visionary for this role because quite frankly, they’re very limited in powers,” he said, according to a video by NYTrue.com, arguing for a charter revision to empower the advocate “to have standing to sue this mayor in court.” He then cited NY1 and the New York Post for having sued City Hall for access to emails of Mayor de Blasio’s with outside consultants, supposedly revealing a “pay-to-play” scheme, which he repeatedly referred to as “nefarious.” He claimed that the public advocate should be empowered to do what journalists ended up having to do.

Asked by Gotham Gazette about the fact that James has been an active litigant against the city, he mentioned that she has been kicked off of several lawsuits due to a lack of standing.

“Now, he may have escaped an indictment, but he’s been indicted and convicted in the court of public opinion in my book,” Polanco said of de Blasio in Queens. “And we as Republicans have a shot.”

Polanco told Gotham Gazette he wants to end “pay to play” in the city and that as public advocate he would create a website, “endpaytoplay.nyc.gov,” where the public could see who has donated to whom, who has hired what lobbyists, what projects lobbyists are working on, and so forth -- connecting all the dots of money, politics, and policy in the city. “Shed sunlight into city government,” he said of his plans.

(The city does already have a “doing-business” database, which affects how much individuals can give to candidates -- if listed as doing business, campaign contributions are capped at $400 to each campaign.)

Polanco, early on in his Queens Village speech, advocated for easier access to handguns, an uncommon policy stance in New York. He claimed that residents have to “run through a labyrinth” to access handguns. He argued that these restrictions significantly hamper the ability to practice second amendment rights and protect one’s home, and he would “do something” about gun laws to ease the restrictions. Polanco explained to Gotham Gazette that he had been responding to an audience question and that expanding gun ownership is not necessarily a top priority, though he does believe in it.

Polanco says he can win as a Republican in the heavily Democratic city by running as a reformer and building a broad coalition.

“I think a lot of New Yorkers will welcome a message of reform. I may be a Republican but I’m a New Yorker,” Polanco said on NY1, “and I think that if we were to carry our message of Republicanism, reform through parts of the city where my party has disregarded in the past, we will experience victory in November.”

“I expect support from everybody,” he told Gotham Gazette. “I hope to bring in some of those Democrats who have voted Republican in the past -- voting Republican is not that foreign to many Democrats.”