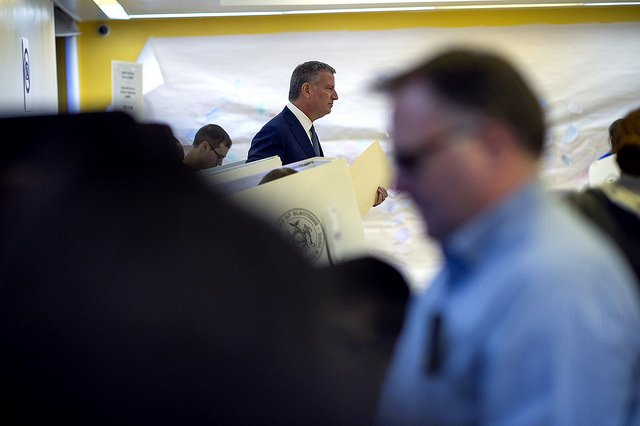 On May 31 Mayor Bill de Blasio said that he and partners were “about to launch a major effort” to change state laws governing elections and voting in New York. ”I think people really want electoral reform in this state,” de Blasio told Gotham Gazette at an unrelated press conference. “And there’s a chance to do it, and it’s about creating the pressure needed to achieve it. So, we’re going to be doing a lot in the next few weeks on it.”

In the subsequent days, de Blasio led two telephone town halls on voting reform, but did nothing else publicly. The regularly scheduled legislative session ended in Albany on June 21 with none of the mayor’s desired reforms -- like early voting and same-day voter registration -- passed through both houses of the state Legislature.

A special session called the following week by Governor Andrew Cuomo yielded deals on several issues, including an extension of the expiring mayoral control of New York City schools, but nothing related to electoral reform was on the table, much less in the final package that was passed on June 29.

On May 31, Gotham Gazette asked de Blasio what had happened to his previously promised efforts on voting reform. The mayor responded, “Well, you know plenty about Albany, and this is when things start to happen.” He then promised a campaign.

On June 30, Gotham Gazette asked de Blasio what had happened to the “major effort” he had pledged given only the two tele-town halls.

“Well, I thought it was the beginning of a major effort, and we found quickly, you saw the session was pretty unusual,” de Blasio said during an open question-and-answer session after discussing July 4th-related public safety matters at One Police Plaza. “It was not like any session I can remember. The leaders -- you remember the day the leaders met for the first time, it was astoundingly late in the session. And for a long time, including as recently as Wednesday morning, we thought that very skinny bill that the governor put forward was all that was gonna get through,” de Blasio said, referring to the initial special session proposal Cuomo had made to reach a deal on mayoral control. The package passed wound up being more expansive, including a variety of legislation and funding priorities, but no voting reforms.

The mayor continued: “So, we started an effort that I thought had a real chance to make an impact. We found a situation where the Legislature and the governor were expecting a very limited session. I’m still glad we pushed for it, and we’re gonna be pushing a lot more because it has to happen. To me, it’s an inevitability. Everything in that Assembly package will become the law in New York State, it’s just a matter when. But this was -- I was surprised at how this whole session evolved. I don’t think I can think of anything exactly like it.”

The Assembly package the mayor referred to includes a slate of efforts to make voting easier in New York, which consistently ranks toward the bottom in voter participation among states. The electoral agenda that has passed in the Democratically-controlled Assembly but stalled in the Republican-controlled state Senate includes early voting, same-day registration, an expansion of “automatic” voter registration, combining primary days, electronic poll books, and more.

The agenda is one supported at least nominally by Cuomo, who included a similar electoral reform package in his 2017 State of the State policy book. The governor did nothing publicly, however, to push electoral reform. In April, he acknowledged nothing on the subject had made it into the new state budget, which included a good deal of new policy that the governor had made priority. In June, after the regularly scheduled session, Cuomo was asked about voting reform at a press conference and said to put it in “the loss column,” a reference to a prior comment he made about his wins and losses for the year. (The governor explained he had far more wins than losses this year.)

“[T]here wasn't extensive discussion on it” among himself and legislative leaders, Cuomo admitted June 22, “but it has been opposed for many, many years vociferously, so I wasn't surprised either.” The governor was not explicit about where the opposition has come from, though movement on the bills, or lack thereof, and comments from Assembly Speaker Carl Heastie and Senate Majority Leader John Flanagan have made clear the Senate has bottled up the legislation. Heastie and his Democratic majority have not necessarily made electoral reform a high priority, however.

While de Blasio has also put limited public weight behind electoral reform, he did hold the two tele-town halls, on June 7 and 14, encouraging New Yorkers to call their state representatives to lobby for reform. On the second call, for which he was joined by former Ohio State Senator Nina Turner and Jason Kander, former Missouri secretary of state and current president of Let America Vote, the mayor said there were 15,000 people participating.

Back in January, de Blasio testified before a state legislative hearing on Cuomo’s executive budget proposal. “I am obviously pleased to see election reform in the executive budget.,” de Blasio said in his opening testimony. “I want to thank the Assembly for passing an election reform package last year, including early voting, which is absolutely necessary given the realities of modern lives and people's’ schedule. Early voting and same-day registration are fundamental reforms we need to improve the democratic process.”