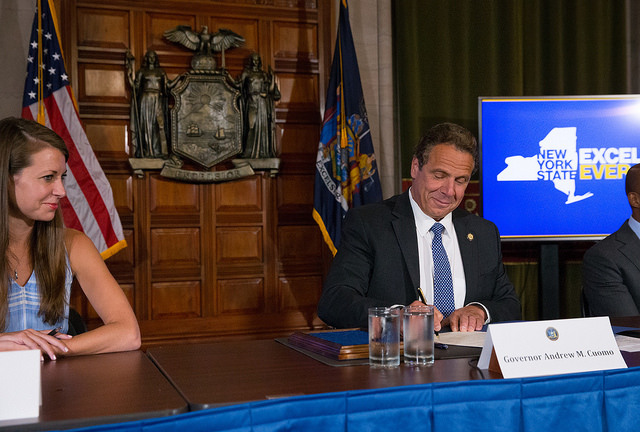 A special session was called Wednesday by Gov. Cuomo specifically to address mayoral leadership over city schools, which was set to expire June 30, and a small number of other matters, but the ensuing discussion produced a more sprawling legislation package, according to Cuomo. The final deal included a three-year extension of local taxes, $55 million in Lake Ontario flood relief funding, and the renaming of the new Tappan Zee Bridge after the governor’s late father.

According to Cuomo, who held a press conference Thursday afternoon at the Capitol to celebrate what was accomplished, he and legislative leaders arrived at a compromise centered on extending mayoral control ahead of his calling the special session. Once legislators returned to the capital, the negotiations were opened up more broadly, and a larger tentative deal was reached at around 8:30 p.m Wednesday night. That agreement followed a day of meetings behind closed doors, during which rank-and-file lawmakers, journalists, and the larger public were largely left on the sidelines. The Assembly voted to pass the omnibus bill at around 1 a.m. on Thursday, while the Senate passed the bill after some internal rankling at around 2 .p.m.

The opaque nature of the discussions, as well as the expense of keeping lawmakers in Albany at a cost of more than $30,000 -- though not all lawmakers take per diems and estimates vary -- drew criticism from lawmakers across party lines, including Senate Minority Leader Andrea Stewart Cousins, who along with her fellow Senate Democrats urged their colleagues on the GOP side to move the bill along Thursday.

“Another day and another example of dysfunction in the Senate,” Stewart Cousins said at a press conference outside the Senate GOP conference room. “The GOP/IDC inability to finish this session is an embarrassment. We need to stop wasting taxpayers’ money and do our jobs. The Senate Democrats are ready to vote for this package of legislation immediately. Let's go to the floor.”

Democratic Assembly Speaker Carl Heastie, who was adamant during the legislative session that the lifting of the charter school cap in New York City not be included in the final bill, commended the governor and his colleagues in the Legislature for passing a comprehensive bill that would prevent disruption in the management of city schools.

“I am proud of the efforts of Assembly members on both sides of the aisle who worked extremely hard to craft a consensus on the many pressing issues our state faces,” said Heastie, who got his way on the charter school cap, in a statement. “Working with Governor Cuomo, our successes include a two-year extension of mayoral control of New York City schools, giving our educational system stability and allowing our school children to thrive.

During his press conference in the Capitol’s Red Room, Cuomo ceremoniously signed the mayoral control portion of the legislative package and said he had anticipated the special session would only address mayoral control and legislation enhancing pension benefits for certain city police officers and firefighters, known as the “three-quarters bill.” However, several Senate Republicans from Upstate saw the bill as too New York City-centric.

“The agreement was to come back and do mayoral control and the three-quarters bill. When we came back, the Assembly was fine with it,” Cuomo told reporters. “My understanding is, in the conference, the Senate said ‘We also want to do the sales tax extenders. And by the way, it’s not just the sales tax extenders,’ they said, ‘We also want do something on Vernon Downs’...That is what we were trying to avoid. Once you start to expand the wish list, it gets much, much harder to get to an agreement.”

Offering a reason for the delay in legislative voting, Cuomo also celebrated how much got done in the end.

The final bill offers a tax bailout to Vernon Downs, an Upstate racetrack, in order to prevent its closure and retain 300 well-paying jobs in the region; provides for critical transportation needs in Westchester County; and includes passage of a proposed constitutional amendment to aid communities in the Adirondack Mountains with infrastructure projects. In addition to the renaming of the Tappan Zee, the Legislature voted to rename Riverbank State Park in Manhattan in honor of retiring Assemblymember Denny Farrell, who was first elected to the Assembly in 1974.

Flanagan also touted the package, saying in a Thursday statement saying that the omnibus bill "resolves a number of outstanding state issues" after "Senate Republicans were able to put together a more comprehensive package that meets the needs of taxpayers, students, and families throughout our entire state." Flanagan also indicated that there were provisions related to protecting charter schools, something Mayor de Blasio stated would be announced in the coming days as administrative, not legislative, matters.

There was no legislative action regarding the MTA, which Cuomo had declared was in a state of emergency on Thursday morning at an event in New York City. At that event Cuomo did pledge an additional $1 billion to the MTA in next year’s budget.

As had become evident when the budget was passed in April and through the end of the legislative session last week, no government ethics or election reforms made it through Albany this year. Two other top priorities of Mayor de Blasio’s -- design-build authority and additional speed cameras for school zones -- were also left on the chopping block.

Still, at his own news conference on Thursday afternoon, de Blasio said he was very pleased with the outcome, especially on mayoral control. The mayor expressed relief that with the first two-year extension of his term, he would not need an Albany vote next year to keep control of the school system. What the mayor does need, however, is the approval of voters this fall when he seeks reelection.