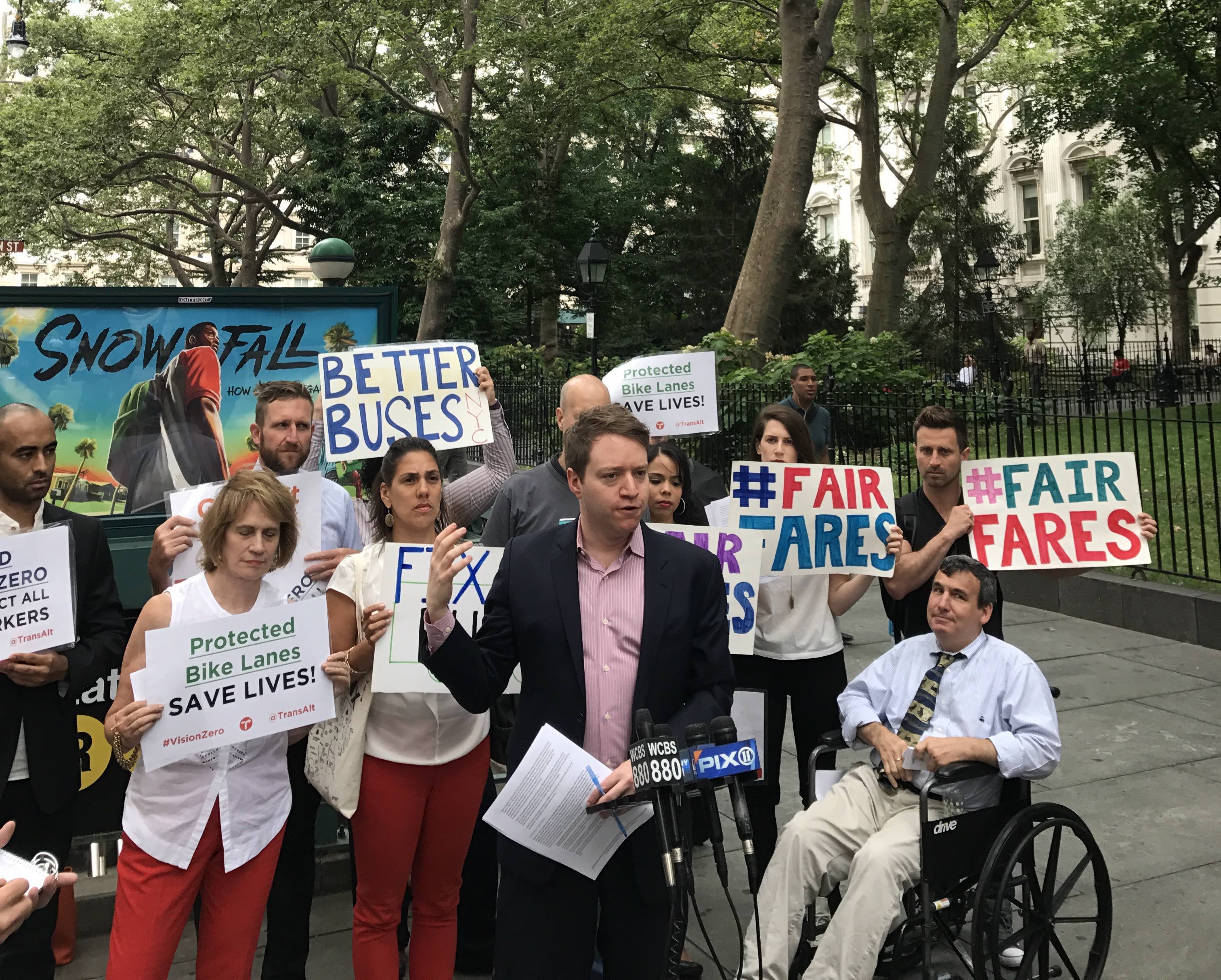 The advocates believe that the time is ripe to hold politicians’ feet to the fire on transit issues, ahead of the upcoming city elections. “Transportation is now a top-tier issue in our city,” said Paul Steely White, executive director of Transportation Alternatives. “There's never been a better time for our city to make progress on streets and transportation. So if you’re running for office, ignore our issues at your own peril. New Yorkers are hungry for solutions and we have them.”

The coalition of advocates did acknowledge that much of the city’s transportation management is the responsibility of the state. The subway system is managed by the state-run Metropolitan Transportation Authority, which is controlled by Governor Andrew Cuomo. The governor recently declared a state of emergency for the MTA to ease procurement rules and speed up improvements to the subway system but critics believe the measure was too little, too late. “We’re not here to let the governor in Albany off the hook,” insisted StreetsPac Executive Director Eric McClure, noting that city dwellers are “unfortunately trapped” in a situation in which city matters are determined by representatives from outside the city. But the activists believe the city can take certain matters into its own hands. “In a world where the governor controls the MTA, we are answering the question: what can the mayor do? What can the city council do? What can other city level elected officials do to help New Yorkers get around town, access jobs and build a fair and sustainable city for the future,” said Raskin.

The organizations coalesced around popular transit fixes such as increasing capital funding to the MTA, adding and improving bike lanes, funding the Fair Fares proposal to provide half-priced MetroCards to low-income New Yorkers, committing to improving safety on the street through the Vision Zero campaign, augmenting the express Select Bus Service and enhancing bus lane enforcement.

“We’re not here promote flying cars or monorails, or new tunneling for autonomous vehicles,” White said. “These are all proven solutions that simply need to be expanded.”

Mayor Bill de Blasio has repeatedly touted expansion of the Select Bus Service, Citi Bike additions, and ferry service expansions as transportation accomplishments under his tenure. These received tepid support from White. “The mayor deserves credit for trying a multitude of solutions that are under his control, ferries included,” White said. “If you look at the subsidies per ride, investments in bus service, improving bus service, investments in walking and biking provide much more bang for your investment buck if you’re the mayor of New York. Ferries are important, but there is more to be had with investments in bus service in particular.”

The coalition, notably, did not take a collective stance on the proposed Brooklyn-Queens Connector (BQX) streetcar, which would run between Sunset Park and Astoria. Certain activists have expressed doubts about investing in a costly new streetcar as opposed to improving existing transit options. The proposal has few strong supporters among transit advocates and there are doubts about whether it can be adequately funded. There are a variety of business and other organizations supporting BQX.

Along with policies with consensus among activists and electeds, the transit groups also pushed for more ambitious, imaginative proposals such as a Brooklyn-Manhattan Bus Rapid Transit route over the Williamsburg Bridge to deal with the planned 15-month shutdown of the L train beginning in 2019.

Additionally, the advocates called on the administration to further its current use of a portion of real estate value added by upzoning to fund transportation projects. “[T]he city is in a position to make sure that part of that value goes to build and rebuild the infrastructure that the real estate relies on,” Raskin said. “That’s something we’re asking the city to do in a widespread way.” The groups also expressed support for the Move NY Fair Plan, which would reform bridge toll prices to simultaneously raise revenue and reduce traffic congestion.

Confident in the achievability and efficacy of their suggestions, the advocates believe the next step is to spread awareness and apply pressure on current and potential New York lawmakers. “The agenda that this group has put together for New York City is doable,” said Marcia Bystyrn, executive director of New York League of Conservation Voters. “The real challenge for all of us is making it clear to every elected official in New York that we expect them to deliver.”

Note: this article has been adjusted to more carefully characterize support for the BQX.