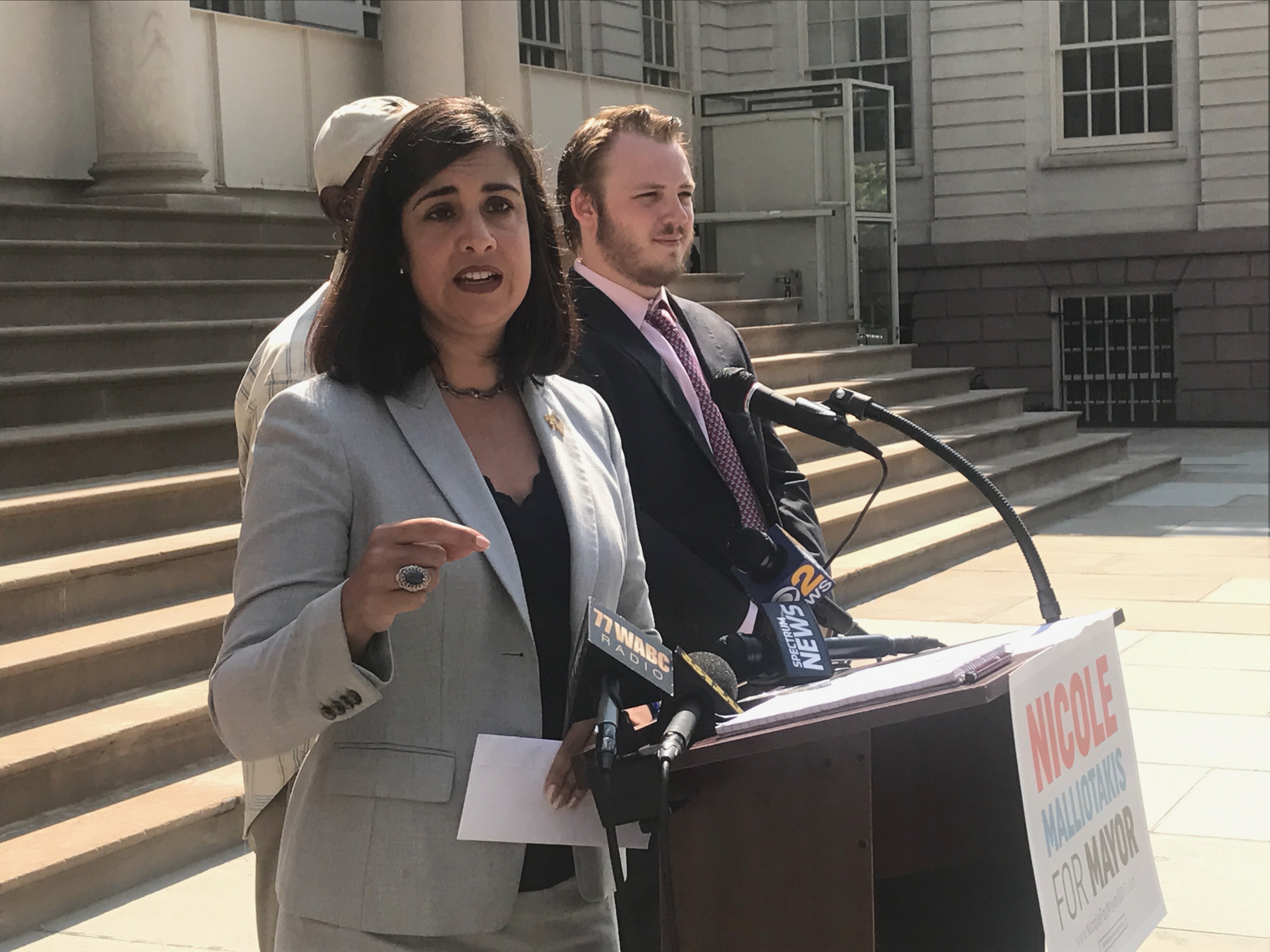 As Mayor Bill de Blasio spent his third day in Queens for his week-long City Hall in Your Borough initiative, presumptive Republican mayoral nominee Assemblymember Nicole Malliotakis showed up at his Manhattan workplace to reprimand the mayor for a lack of transparency for his numerous trips out of the city.

“I believe it's important that when we ask the mayor how much has it cost the taxpayers for various trips around the United States, or around the world, that he give the public that answer,” she told reporters from the steps of City Hall. Seeking those answers herself, after a brief news conference, Malliotakis hand-delivered to the mayor’s office a Freedom of Information Law (FOIL) request for information on the mayor’s travel expenses from 21 trips he has made in the last three-and-a-half years.

Malliotakis’ move was prompted by the NYPD’s recent refusal to release cost estimates for police protection provided to the mayor and three of his aides on a three-day trip to Germany two weeks ago. De Blasio travelled to Hamburg, a trip that was announced at the last minute, to participate in “events surrounding the G20 Summit,” a gathering of world leaders in which the mayor of New York has no official role. Instead, he spoke at a protest rally – its organizers invited him and paid for his travel – and other political events. The New York press, which wasn’t informed of his trip in advance, was left behind.

During any national or international trip that the mayor takes, he is trailed by staff members and an NYPD security detail. De Blasio’s excursions have often earned him criticism from political opponents and from New Yorkers who believe the trips distract from his duties at home. His latest jaunt to Germany was considered particularly ill-timed, coming just a day after the killing of NYPD officer (posthumously promoted to detective) Miosotis Familia at the hands of a career criminal in the Bronx. Malliotakis said it was “shocking that [the trip] was the day after an NYPD officer was assassinated on our streets.”

“Instead of being here to console the members the members of the NYPD and mourn with the family members, or attend the ceremony for 524 new police officers... our mayor was on the next flight to Hamburg,” said Malliotakis, referring to a swearing-in ceremony for new officers that took place on July 9.

While the mayor and his aides had their travel and lodging expenses covered by the rally organizers in Hamburg, the costs to move and house his security detail were paid for with public dollars. Gotham Gazette reported last week that the mayor did not intend to release details of the trip’s cost, and the NYPD has refused to do so based on long-standing department policy regarding protection of dignitaries.

At a news conference last week, the mayor directed the Gotham Gazette to ask the NYPD about the estimate of the cost. When informed that the NYPD would not and indeed never did so, the mayor demurred, saying, “I want consistency with whatever their practice has been.”

Malliotakis contrasted de Blasio’s reluctance to be fully transparent with his prior positions as public advocate. In that role, de Blasio often criticized city agencies for refusing to comply with FOIL requests and was particularly derisive towards the NYPD for its lack of public disclosure.

The Assemblymember also referenced several of the issues that she has made a centerpiece of her campaign for mayor, saying she wouldn’t mind the mayor’s travel as much if “the traffic was flowing, the transit was moving, the homeless were being taken care of.”

Asked by Gotham Gazette if she would limit her travel only to essential trips if elected mayor, Malliotakis was noncommittal, saying “I understand that the Mayor of the City of New York has international attention and appeal and it is important to have some type of diplomatic relations” but that mayoral travel should “have some type of relation to your role if you're taking staff and you're taking security.”

Malliotakis’ FOIL request doesn’t deal only with the contentious Hamburg trip, but with a total of 21 domestic and international trips that the mayor has taken which Malliotakis claimed “do not necessarily seem related to his position as mayor.” They included trips to Chicago, several European cities, and his ill-advised trip to Iowa during the presidential primary race in April 2015.

Responding to the NYPD’s stated security concerns in providing too much information about mayoral travel, Malliotakis said she was “only asking for the amount that it's costing taxpayers, we're not asking for the specific number of employees, the number of security personnel needed to travel with the mayor for security reasons.”

Monica Klein, a spokesperson for the mayor’s reelection campaign, said in an email that “this is about a 3-day trip mainly over a weekend that followed all previous NYPD security protocols of past travel for this mayor and others,” and accused Malliotakis of wanting to “force attention away from her support for President Trump, her donations from huge Trump supporters, and her votes against marriage equality and the minimum wage.” Tying Malliotakis to the controversial president has been a consistent strategy of de Blasio’s campaign.

Klein also drew attention to the Malliotakis’ own travel in office as an Assembly member, which included trips to China, Greece, and Hawaii. A spokesperson for Malliotakis previously told the New York Daily News that those trips were off-session and did not utilize public funds.