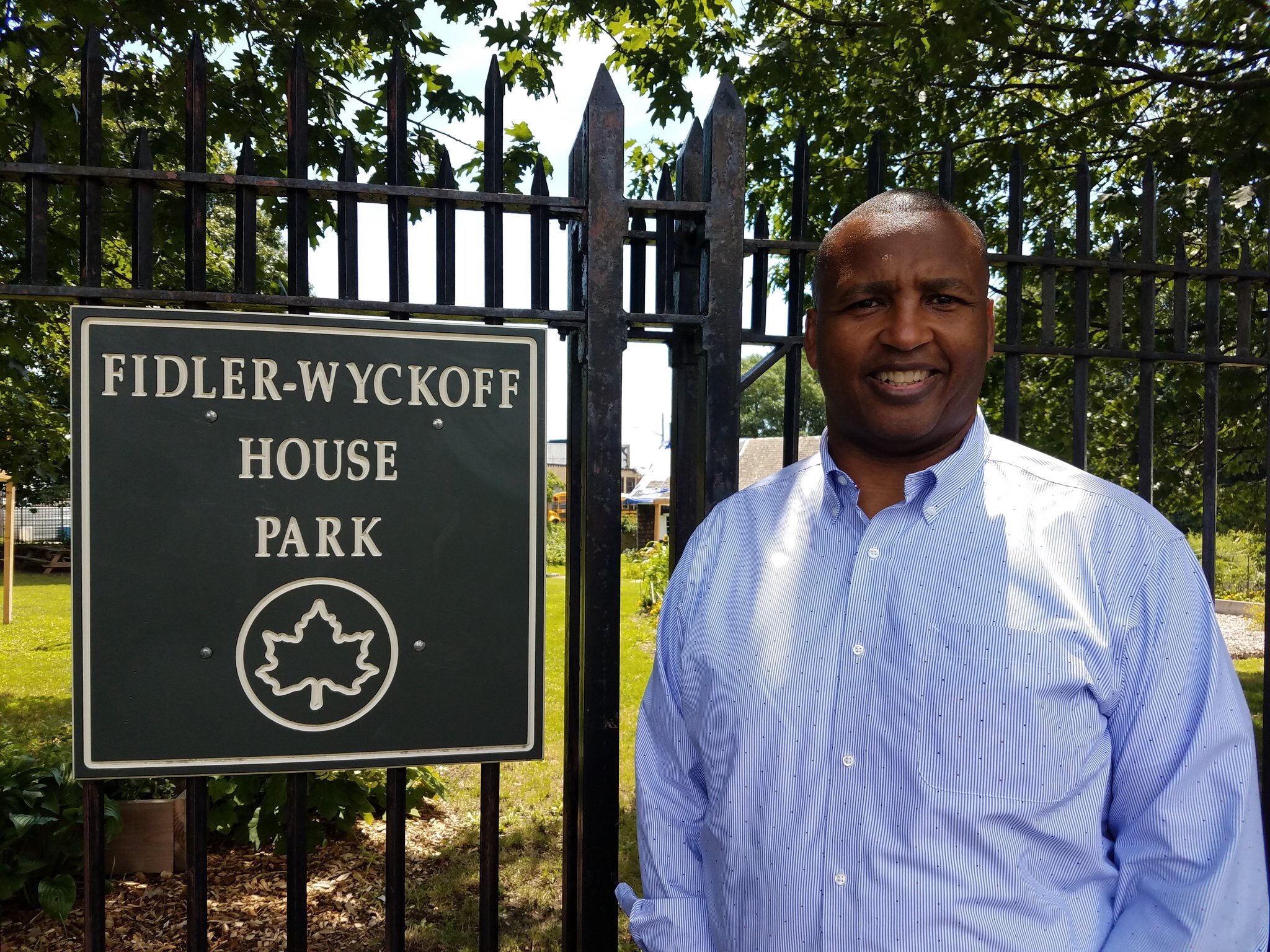 Ahead of the citywide elections, Republican candidates for Comptroller and Public Advocate -- Michel Faulkner and J.C. Polanco, respectively -- have struggled to raise funds for their campaigns, trailing their respective opponents by large sums.

With just over three months before Election Day, both Faulkner and Polanco need to significantly increase their fundraising prowess to run competitive races against Comptroller Scott Stringer and Public Advocate Letitia James, both Democrats.

Faulkner, a former New York Jet and reverend, has over $91,000 cash-on-hand as of the latest filing. Over the course of his campaign, he has received $157,875 in loans, $126,800 of which is his own money. Notably, former Republican candidate for mayor Paul Massey and his wife both donated $4,950 to his campaign in May, the maximum amount that is legally permitted. Massey and Faulkner had endorsed each other before Massey dropped out of the race.

A political consultant and aide in the state Assembly minority, Polanco has even less in the bank, with only $10,386 on-hand, though he only recently entered the race. Public Advocate James, meanwhile, has $309,720 cash-on-hand.

Similarly, Comptroller Stringer holds $1,663,140 in the vault as of the July filing, far surpassing Faulkner.

Polanco and Faulkner are both energetic campaigners, but it is unclear if they will be able to pick up the fundraising pace. In order to have a chance, they must be able to fund campaign activities, meet the Campaign Finance Board’s threshold to receive public matching funds, and qualify for the debates.

In a heavily Democratic town -- roughly 80% of New York City voters voted for Hillary Clinton this past Fall -- gaining traction as a Republican is always difficult. Still, the Faulkner and Polanco totals are particularly low, according to George Arzt, a long-time New York City journalism and communications professional. “That’s dreadful,” he said, reacting to a reading of the candidates’ fundraising totals. Arzt is a Democrat who worked for Mayor Ed Koch.

Their struggle raising money, particularly from Republican and Conservative groups and individuals, comes as no surprise to Arzt, though. “Would you put money into their campaigns knowing that they have about under a 5 percent chance of winning?” he asked rhetorically. “Would you waste your money if you were the organization?”

However, in interviews with Gotham Gazette, both Faulkner and Polanco expressed optimism about their campaign’s ability to gain traction in the coming months. Both candidates believe they have a crossover message that doesn’t fit neatly into a typical Republican box. (They also have significant differences, given that Faulkner is a strong proponent of President Donald Trump, while Polanco is a longtime critic of Trump.)

Faulkner pointed to his heterodox message on social services: “People ask me, ‘well are you going to cut services?’ The answer is no, we need more services.” And on unions: “I’m not a union buster, I believe in labor, I was a member of the Teamsters union.” He also sports a more conventional urban conservative message backing charter schools and on policing. “My biggest challenge is my party affiliation,” he said.

More true to the job of comptroller, Faulkner has a harsh assessment of his opponent’s history holding Mayor de Blasio accountable. “He’s a tame, weak watchdog, who’s only watching. He’s not barking, he’s not biting, he’s not growling,” Faulkner said of Stringer, who has been tough on de Blasio but did endorse the mayor for a second term. “He’s part of the problem,” Faulkner said, insisting Stringer is too complacent with an unacceptable status quo. “The reason I’m becoming concerned about Stringer is he campaigned as an activist,” he said. However, Faulkner alleged Stringer “has become complicit in everything that's wrong with government.” “He’s a government bureaucrat who’s worse than de Blasio,” he added.

Faulkner said he is unfazed by Stringer’s fundraising advantage. “He has more money, but he doesn't have a fundraising advantage because he doesn’t have Michel Faulkner’s heart,” he said. “I don’t need his money; I need enough money,” Faulkner said. “I don’t need as much as he needs to run a campaign. I don’t have to, I’m a whole different breed of cat.”

Still, Faulkner acknowledged he needs to get the ball rolling with his fundraising efforts. “Do I have enough money now? No, but I believe I will have enough.”

He went on to explain why he has gotten off to a slow start in fundraising, pointing to his short-lived mayoral campaign, which he ended to run for comptroller, where there was no Republican candidate. “To say that it’s been a challenge is a real understatement,” he said. “Because I tried so much stuff for the mayoral campaign, the pivot is very difficult to getting back on track.” Faulkner said he is going to add more “call times,” periods spent on the phone talking to potential donors.

“We actually had a very exciting call [recently] and Ed Cox is helping,” Faulkner said of the New York State Republican Party Chair. “The county leaders are going to get behind us and work with us, we’re putting the pedal to the metal,” Faulkner said.

Polanco, a self-described “Never Trump Republican” who strives to be an independent voice willing to speak out against wrongdoing regardless of party, is focusing his campaign on political and ethics reform. He also promises to be a stronger watchdog of the mayor than the current officeholder he is seeking to unseat.

In the interview, Polanco described how difficult the fundraising component has been for him during his short campaign. “There's no question that fundraising is the toughest part of this campaign,” Polanco said. “The two hardest things to do are losing weight and getting financial contributions for a public advocate’s race. I’m convinced of those two things” he said in his typical upbeat tone. “But I’m working at it.”

“When I got into the race,” he continued of his early June launch, “I had to go through all this paperwork so that I could qualify to be able to fund-raise. From the moment I got the OK to the moment of the first [campaign finance] filing was only about three weeks. I’m continuously calling to try to make it happen, to generate excitement so that I could have a respectable race and show some credible fundraising numbers.”

Polanco expects the bulk of his donations to come from small-dollar donors and cited complications with getting large dollars from the Republican Party apparatus. In a prior interview with Gotham Gazette, around the time of his campaign launch, Polanco said he wouldn’t be campaigning full-time for a while, given the need to support his family.

“That's exactly what you want to be doing is focusing on individual, small-dollar donations to qualify for the match program,” said Republican consultant and communications professional Jessica Proud. “For the city, the mayor’s race tends to get the focus of the attention when it comes to earned media,” she said. “J.C [Polanco] got into the race a little bit late so I think he’s just getting started now.”

“It takes a little time to build up an organization,” Proud added. “It's not like you’re flipping the switch and they give you a big check,” she said of the matching funds program, wherein the public money supplements small-dollar donations to political campaigns.

Arzt argues it is not good timing for Republicans to win citywide, including mayoral candidate Nicole Malliotakis, a Staten Island Assembly member and the presumptive GOP nominee. While Republicans Rudy Giuliani and Michael Bloomberg had success running city-wide, times have changed, according to Arzt. He noted that Giuliani succeeded a troubled Dinkins administration and Bloomberg came in just after the terrorist attacks of September 11, 2001. The current Republican candidates, he said, currently lack any evident “catastrophic event that could propel them into office,” though one could occur at any time. “Its tough to go up against an incumbent unless the incumbent is tainted by scandal or misjudgement,” Arzt added.

Proud, who does communications for Cox and the state GOP, expressed support for Polanco and Faulkner, and their non-ideological positioning. “There's no Democrat or Republican way to pick up the trash,” she said. “And I think that's the kind of positioning you need to have as a Republican in New York City.”