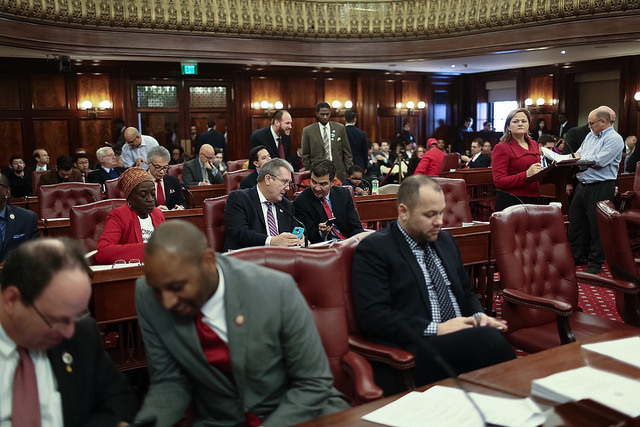 The New York City Board of Elections has widely been acknowledged as a dysfunctional agency in need of urgent and sweeping reform, yet the political will for modernizing and professionalizing the board has not existed, at least in part because its current structure benefits those in power.

Its system of appointments based on political patronage has long been a source of criticism and its mismanagement of election operations has frustrated voters and been the subject of City Council oversight hearings. But, when asked, the eight men vying to become the next Speaker of the City Council recently said concerns about the BOE are misguided. To varying degrees, they indicated that the board is effective and efficient, that its failings are isolated rather than systematic, and that its current structure should be preserved.

At a November 20 speaker candidate forum hosted by Citizens Union, other government reform groups, and New York Law School, seven speaker candidates -- Corey Johnson, Mark Levine, and Ydanis Rodriguez of Manhattan; Donovan Richards and Jimmy Van Bramer of Queens; and Robert Cornegy and Jumaane Williams of Brooklyn -- were present and they mostly took the middle of the road when asked about the steps the City Council, which approves appointments to the BOE, could take to improve the board. The ten BOE commissioners include two -- one Republican and one Democrat -- from each borough.

The Council members hedged their bets and praised the BOE, recognizing that any criticism could potentially be read as directed toward the county party organizations that nominate BOE commissioners and place other employees at the board -- the same county organizations whose support each candidate is seeking in order to become speaker. The eighth candidate, Ritchie Torres from the Bronx, would later give Gotham Gazette a similar response.

None of the members were in favor of a non-partisan restructuring of the board. “That’s a tough question to ask of speaker candidates,” Williams said, to laughter from his colleagues in acknowledgement of the role of the county party machines in both picking BOE commissioners and picking the Council speaker. Williams defended the board but did acknowledge that patronage has played a role in appointments and that the Council could do more to improve it.

“We know that we do have some issues and if we can just do some more thinking through that process and make sure that it’s not as patronage as some folks may think, we can move a lot further,” Williams said, taking the most bold position of the group. “I’m not sure if we push as hard as we can when things go wrong.”

Other candidates spoke generally about reforming election and voting laws, a tangential subject that is mostly the prerogative of the state Legislature, and some staunchly argued in favor of the current partisan composition of the board, which they insisted maintains a balance and prevents one-party hegemony in elections.

“I do not support non-partisan appointments to the Board of Elections,” said Johnson, one of the three perceived frontrunners in the race, along with Levine and Cornegy. “I believe that the parties play a particular role in ensuring that we make sure that any party that’s dominant at a given time cannot run roughshod over another party. If someone came up with a perfect system of a non-partisan way to handle it, maybe I’d entertain it. I’ve never heard of that system, I don’t know how you take political influence out of politics.”

The city BOE falls under state jurisdiction, like all local boards of election, although the city gets to decide the board’s budget and not much else. The ten board commissioners are nominated by the county party machinery and appointed by the City Council. Representatives from the board testify at City Council hearings, usually during budget season, and receive recommendations and often admonitions from Council members, but are not bound to follow any Council mandates.

The board is often seen as favoring the Democratic Party establishment, given that the vast majority of candidates for city offices are Democrats. Candidates not backed by the party machinery are often challenged in board proceedings and kicked off the ballot, though they are often first-time candidates with fewer resources and without experienced election lawyers.

He continued, “Does the BOE have inefficiencies? Yes. It’s true of every agency in city government. There’s not a single agency in city government that’s free of inefficiency. So the notion that you would cite inefficiency as an excuse for fundamentally changing the structure of an institution is dubious.” Torres said he would oppose any measures that could weaken the party organizations’ role but conceded that the Council should “study the problem comprehensively” to determine the needs and inefficiencies of the BOE.

There have been studies in the past, and each has found persistent issues.

A 2013 report by the city’s Department of Investigations found a raft of problems in elections management as well as internal board administration. In 2016, the BOE was responsible for a massive voter purge in Brooklyn during the presidential primaries, resulting in legal action by state Attorney General Eric Schneiderman. In November, Schneiderman announced a consent decree with the BOE that requires added oversight of the board’s voter list maintenance.

Less than a week before this year’s general election on November 7, city Comptroller Scott Stringer also released an audit that excoriated the BOE’s dysfunctional election operations. At each step, the BOE has pushed back and has been resistant to change. Even when Mayor Bill de Blasio offered a $20 million incentive for the board to enact major reforms -- recommending the empaneling of a Blue Ribbon Commission to analyze the BOE, more transparency in hiring and improved poll worker training, among other measures -- its commissioners refused.

“The Mayor believes that it is critical that we reform the Board of Elections,” said Seth Stein, a mayoral spokesperson, in a statement on Tuesday. “They have demonstrated time and again that they are unable to perform the basic functions of their office, like keeping eligible voters on the rolls. The Mayor looks forward to working with whoever the next Speaker is to encourage the Board to accept the $20 million we have offered in exchange for necessary reforms.”

State-level BOE reforms have not progressed in Albany.

Those who could take steps or apply pressure to improve the BOE’s abysmal record are the very people invested in the status quo, however, and the City Council, particularly its speaker, falls squarely within that dynamic. Election experts also tend to agree that the Council can pass little meaningful reform, absent legislative action at the state level, and that the bi-partisan BOE composition is appropriate.

“There’s very little the City Council can do regarding the structural functioning of the agency,” said Sarah Steiner, an election lawyer. “They could maybe fund the board at a higher level so it could function better.”

“In terms of patronage, it’s a bi-partisan agency, not a civil service agency. Unless that’s changed, the county organizations is where the commissioners and employees will come from,” she added. She insisted that most of the board’s employees are, in her experience, qualified and hard-working professionals. “As in any organization, some employees are better than others,” she said. And she warned that a civil service agency running elections could be open to political interference, while the current structure is designed to prevent just that.

Steiner praised, in particular, the speed and accuracy with which the BOE provides election night results. But, she said, “they are less good at some of the work regarding candidates. I think the rules structure for candidates needs substantial revision.” Unlike the state BOE, the city agency doesn’t provide a public comment period for rules changes, she said, which often leaves the candidates and their campaigns unaware and unprepared. “The administrative rules are not as easy as the board thinks they are, and they’re largely a minefield,” she added.

J.C. Polanco, a Republican who unsuccessfully ran for public advocate this year, has served as  president of the city BOE and saw the problems first hand and attempted to fix them. He campaigned this year on a platform that included BOE reform. He’s blunt about the Council speaker candidates and why they wouldn’t speak up against the agency. “Each candidate has to try not to offend the county organizations,” he said.

Though Polanco also agrees that the BOE’s partisan structure may be necessary, he believes it can be better. “One of the things to do is to professionalize the board,” he said, “by forcing every candidate to go through the crucible of the [Council’s] investigations process required of commissioners.” He favors merit-based hiring and called for it when he worked at the board.

“There are professionals at the board that get a bad rap for the failures of the board to modernize,” he insisted, echoing Steiner. “You can definitely have a professionalized partisan agency.” The board should post positions with qualifications online, he said, and more publicly seek employees. “It would require an enlightenment of the citizenry and the board,” Polanco said. He also speculated about giving third parties representation on the board, proportionate to their vote shares in prior elections.

Although the Council members poised to be the next speaker may not agree, the official they are hoping to succeed believes that the BOE needs improvement. Melissa Mark-Viverito, who, in the waning days of her speakership, has waded into conflict with the Manhattan Democratic County Committee over a BOE commissioner appointment, said the Council has discussed reforming the BOE for years. Responding to a question from Gotham Gazette, she said, “There’s obviously a lot more work that has to be done. We’ve seen the reports issued by DOI and others with the dysfunction at the Board of Elections and there definitely has to be a lot more professionalizing of the Board of Elections and being able to implement reforms.”

While much of the conversation around elections and voting in New York tends to revolve around the state’s antiquated laws, there have been local attempts at such reform. Council Member Ben Kallos has been a particularly vocal critic of the board and, as chair of the Council’s Committee on Governmental Operations, has pushed legislation that can improve elections and voting access. He has time and again urged representatives of the board to move towards merit-based hiring --  “I favor the civil service over the patronage appointment process,” he told Gotham Gazette on Monday. Kallos’ bill allowing online voter registration recently passed the Council. The mayor is expected to sign it into law, and it is considered valid under guidance from A.G. Schneiderman.

We can “find meaningful alternatives that can help fix the BOE at the city level,” Kallos said. “As we learned with online voter registration, with a little bit of creativity and good attorneys, I think a lot can be possible at the local level.”