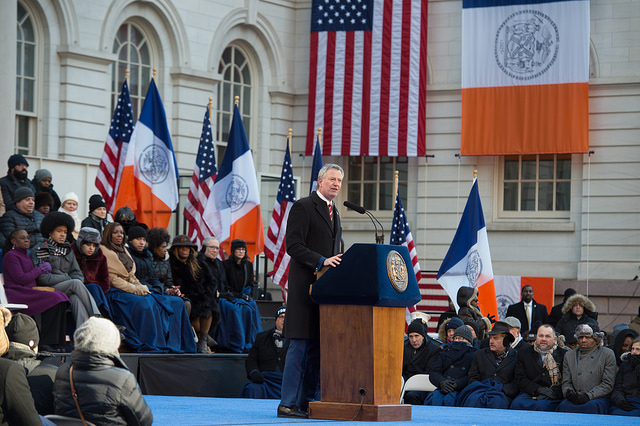 The recent citywide municipal election saw more than $53 million in spending, with nearly $42 million in private funds raised by candidates and more than $17 million in public matching funds disbursed by the New York City Campaign Finance Board. Candidates just filed their final campaign disclosures with the Board, which were due Tuesday, showing the last weeks of activity as the election cycle came to a close, and totals for the full campaign cycle.

The final filing period covered December 1, 2017 to January 11, 2018, therefore largely including the last spending outlays by campaigns, especially in contested general election races, and including those who ran for City Council speaker.

Mayor Bill de Blasio, a Democrat who was handily reelected for a second and final term, spent a total $10.2 million on his campaign, raising $6.5 million in private funds. He received about $3.5 million from the CFB’s matching funds program, which provides a 6-to-1 match for small dollar donations up to $175 from city residents. As of Tuesday, de Blasio had spent $210,267 more than he had brought in, strangely leaving him a negative balance.

As with most candidates, de Blasio’s major post-election expenditures went to payroll and campaign consultants that deal with issues such as compliance with election law. In the last disclosure period, Dec. 1-Jan. 11, de Blasio spent about $211,000, with $82,500 in payments to a campaign consultancy -- Kantor, Davidoff, Mandelker -- and much of the rest to campaign workers.

De Blasio finished the cycle having brought in donations from 11,772 different donors, with an average donation of $556, according to CFB records. He raised about $4 million from within the five boroughs and more than $2.5 million from outside New York City.

De Blasio’s Republican opponent, Assemblymember Nicole Malliotakis, had a much smaller war chest, raising $1.2 million and getting about $2.5 million in public funds. She spent nearly all of it, about $3.7 million, leaving her $47,689 in the end. She spent $53,613 in the latest disclosure period.

In a city with nearly seven Democrats for each Republican, the citywide Democratic incumbents stood at a great advantage. Like de Blasio, Comptroller Scott Stringer and Public Advocate Letitia James vastly outraised and outspent their opponents and were comfortably reelected.

Stringer raised $2.3 million for his reelection, spending about $880,000 of it on his race. Although the comptroller was a participant in the matching funds program, his GOP opponent Michel Faulkner posed little competition and Stringer declined a potential public funds payment of nearly $600,000. After the election, Stringer transferred $1.3 million to another campaign account, Stringer For New York. He has $131,200 in cash on hand, money he is widely expected to use toward a mayoral run for 2021.

Faulkner, a Harlem pastor and former professional football player, raised $281,706 in sum, much of which was his own money on loan. He ended up spending $405,963, leaving him $124,257 in the red. He participated in the matching funds program but did not qualify for any payments.

Unlike Stringer, Public Advocate James decided to take public funds, controversially claiming that she faced a competitive opponent. James got $756,486 from the CFB and raised $947,530. After spending more than $1.6 million, including about $10,000 in the last period, she was left with a balance of $30,517. She is also widely expected to run for mayor next cycle.

Although the citywide positions saw a continuity of leadership, at the New York City Council, Speaker Melissa Mark-Viverito faced term limits and could not run for reelection. Her eventual successor was fellow Democrat Council Member Corey Johnson, a prolific fundraiser and retail campaigner who was reelected for a second and final term to Council District 3 in Manhattan. Johnson raised $507,416 and spent $415,993. He spent about $44,000 in the last disclosure period, leaving $91,423 in his campaign coffers. Johnson spent a good deal of money donating to his Council colleagues in order to both help them win their elections and curry favor ahead of the January 3 speaker vote that he won.

Johnson had a nominal, albeit colorful, opponent in Marni Halasa, a former legal journalist who runs a protest consulting group. Halasa only raised $13,625, most of it from personal loans to her campaign, and spent all but $61.

The five borough presidents mostly faced little competition, each of them being reelected with at least 75 percent of the vote.

Brooklyn Borough President Eric Adams raised $659,932 for his race and spent $350,656. Bronx Borough President Ruben Diaz Jr. brought in more than $1.3 million and dropped $927,404 on his race. Both are considered likely 2021 mayoral candidates.