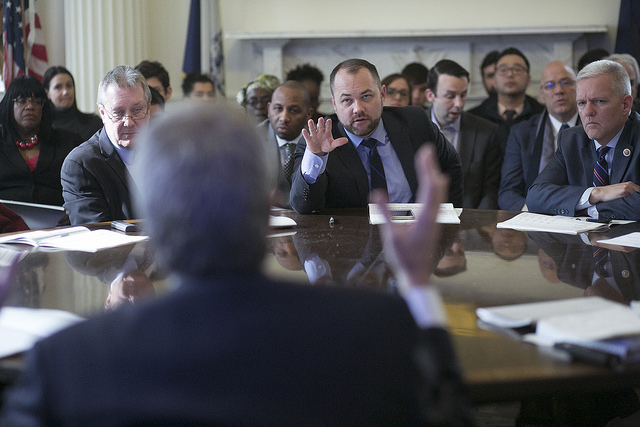 The City Council is set to begin hearings next week on Mayor Bill de Blasio’s $88.67 billion preliminary budget proposal for fiscal year 2019, with a smaller but significant figure likely to become an issue of controversy in negotiations between the two sides of City Hall.

Council Speaker Corey Johnson seems to be gearing up to push the administration on funding half of the MTA’s $836-million action plan to stabilize the city’s ailing subways. The plan, announced by MTA Chair Joe Lhota in July, has become another point of contention between Mayor de Blasio and Governor Andrew Cuomo, both Democrats, as Cuomo and his appointee, Lhota, have called on de Blasio to fund half the action plan, which the mayor has refused to do. De Blasio has pointed to more than $450 million he says the state has raided from the MTA and should return in order to fund the action plan.

While de Blasio fights the governor’s demand, Johnson may be closing in on the mayor from the other side.

“It is no secret that our subway system is in crisis. Though I am glad the Governor appointed Chair Lhota to fix the MTA’s ongoing problems, we still have serious concerns and we finally need to get the job done,” Speaker Johnson said in a statement to Gotham Gazette on Friday, when asked about his position on the MTA action plan. “The New York City Council will consider a one-time payment to fund the proposed subway action plan and we look forward to working with the Mayor, Governor, the Senate and Assembly and MTA in repairing the transit system.”

Johnson’s remarks came after a recent interview with the amNew York and Newsday editorial board in which he indicated that perhaps the city should consider paying half the cost of the plan in exchange for more accountability from the MTA, and possibly more. “Maybe if the mayor were able to get some other good things for the city that are really important to him, maybe he would be more willing for the city to come up with a one-time payment,” Johnson said in the interview, perhaps previewing his role as a deal-broker on the issue.

Not only will all the parties be negotiating the action plan funding, but also long-term funding for the MTA, which may include a congestion pricing scheme. Johnson said he is worried that a potential “lock box” for revenue raised through congestion pricing -- a hotly debated policy issue that has taken center stage in the MTA funding conversation -- would not be failsafe. That concern appears to muddy de Blasio’s demand that any congestion pricing plan include such a lock box guarantee that any money raised in the city stays in the city for MTA subway and bus improvements.

At an unrelated news conference on Thursday, de Blasio brushed aside any concern about Johnson’s contrasting perspective, and denied that it may be undercutting his position in budget negotiations with the state. “I have a lot of respect for the speaker. We have talked about it. We have a different view but it’s with real respect,” de Blasio said, when asked by Gotham Gazette about Johnson’s openness to funding the MTA action plan. “He’s the leader of a separate part of government. He’s going to issue his opinions, the important thing is we always talk about them.”

De Blasio expressed appreciation that Johnson was pushing for “real checks and balances” to ensure money raised in the city is spent within the city and with oversight and approval from local officials. “So I think the speaker was right on point on those things he said about what the conditions would be. But no we’ve had a very collegial relationship. I’m very happy with it.”

It was a similar exchange to that de Basio had with Comptroller Scott Stringer last summer, when Stringer said that the city should put up half the action plan funds.

De Blasio and the City Council must agree on a new city budget deal by the July 1 start of the next fiscal year. The state fiscal year begins April 1, and negotiations in Albany are about to heat up.

At the Thursday press conference, the mayor reiterated his preferred policy of implementing a so-called millionaire’s tax that would both fund transit infrastructure and subsidized MetroCards for low-income New Yorkers, and called the new congestion pricing plan, put forth by the governor’s Fix NYC panel, that would implement a surcharge on taxis and for-hire vehicles “a very promising one.”

“Look, there’s going to be a whole negotiation over the state budget. We’re going to be actively involved in that,” he said. “And we’re going to be listening for any plan that guarantees results for the people of New York City. If it doesn’t have a lockbox, we’re not going to part of it.”

As Johnson noted, any agreement on funding the MTA and on a potential congestion pricing plan will have to be negotiated between the governor, the state Assembly and the state Senate. But state elected officials have so far vacillated on how to move forward or presented options that have been unpalatable to de Blasio’s administration. The governor has not presented actual bill language around congestion pricing, though his panel put forth detailed recommendations with a three-year phase-in.

“We had an initial conversation internally,” Assembly Speaker Carl Heastie, a Bronx Democrat, told reporters earlier this month. “I can clearly say the funding sources for the MTA is a priority for members, but I don’t think the members at this point are ready to go forward. But I do think we will come up with some ideas because the importance of funding the MTA — even the biggest critics realize some sort of long-term funding is necessary.”

The Senate leadership, on the other hand, has been far more hostile to the mayor’s priorities, as is typical. “The city has to ante up its share. The state has already made a commitment,” said Senate GOP Majority Leader John Flanagan, at an unrelated news conference on January 10. Flanagan has already come out against any new taxes and has been noncommittal on congestion pricing. During a Crain’s New York Business breakfast forum on January 26, he said, “When someone asks me about congestion pricing, I don't want to gratuitously say ‘no’ because we have not conferenced this.”

The Senate’s Independent Democratic Conference, which helps Republicans control the chamber, has put forward separate legislation earlier this month that would force the city to bear half the cost of the MTA action plan by diverting a percentage of sales tax revenue.

That measure, among others, was also part of Governor Cuomo’s executive budget proposal, which includes cost shifts for MTA capital improvements from the state to the city and a proposal to create special tax zones in the city to capture revenue for the MTA from increasing property values around transit investments. The Citizens Budget Commission, an independent fiscal watchdog, criticized the proposals and called the shifts “unjustified” and said they would require “a sevenfold increase in City capital contributions.”

“These proposals are an attempt to impose an onerous cost shift onto New York City residents and businesses, who already pay an estimated 72 percent of MTA dedicated taxes and subsidies,” said CBC President Carol Kellerman, in a statement on Cuomo’s executive budget in January.