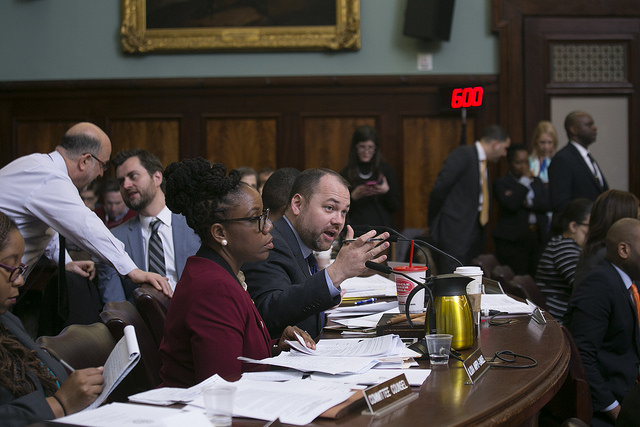 Last week, the City Council proposed a legislative package aimed at confronting sexual harassment in private and government work environments. It includes 11 bills, four of which would apply to city agencies should they become law. Council members sponsoring the bills, including Speaker Corey Johnson, touted the legislation as evidence of the Council taking significant action toward preventing and punishing the type of harassment that has become the focus of a national movement. But the bills do not apply to the City Council itself.

“All New Yorkers are entitled to a safe, respectful workplace – and this starts with sending a strong message to employers that there is no place for sexualharassment in New York City,” Johnson said in a press release. “With more and more sexual harassment cases being brought to light, it has never been more important for the government to play a role in the movement to end sexual harassment and assault.”

A spokesperson for Council Member Helen Rosenthal, who chairs the Council’s Committee on Women, told Gotham Gazette that the process is in its early stages, insisted the Council would comply with the practices in the new laws, and said that many of the provisions in the bevy of bills are already the Council’s policy, such as the provisions included in Johnson’s bill.

A spokesperson for Adrienne Adams also said the Council was early in its process and “intended to comply” with the legislation.

A spokesperson for Mark Levine did not respond to requests for comment. Last year, Levine announced plans to introduce legislation that would designate Council staff complaints as the purview of the Council’s Standards and Ethics Committee, which currently only has oversight of elected Council members. The proposal has yet to make it into bill form.

For the several hundred employees of the City Council, the body’s own harassment policies and procedures are not public and Gotham Gazette is still awaiting the results of a Freedom of Information Law request for information regarding how harassment complaints are handled and how the Council’s equal employment committee (EEC) functions.

When it comes to handling complaints at the Council, sources indicate that there is a process for making and evaluating complaints through the EEC. Elected Council members themselves, are subject to the Committee on Standards and Ethics, made up of Council members, which evaluates complaints and can adjudicate punishment, as it recently did with Council Member Andy King, who was assigned additional training after a complaint of undue attention to a staff member was substantiated.

The bills will likely be changed before they are voted through committee and then the full Council, but to what extent remains unclear.

It was also unclear whether the offices of the Comptroller, Public Advocate, and Borough Presidents were aware of their inclusion in the legislation. When asked about their exclusion, working from apparently incorrect initial responses from the Council, those offices sent the following replies.

A spokesperson for Comptroller Scott Stringer declined to comment regarding the Council leaving itself out of the legislation, but provided Gotham Gazette with the office’s policies and procedures on sexual misconduct.

A spokesperson for Public Advocate Letitia James did not respond to a request for comment.

In a statement, Brooklyn Borough President Eric Adams said, "We have a standing EEO policy and trainings are conducted annually in coordination with DCAS. Even though the agency is not required to do so, Brooklyn Borough Hall implements the same anti-sexual harassment training that is applied in mayoral agencies. I will continue to apply the highest City standard for combating sexual harassment in the workplace, and I appreciate the City Council taking up this important issue.”

A spokesperson for Bronx Borough President Ruben Diaz, Jr. told Gotham Gazette, "Our office has a comprehensive sexual harassment policy that reflects the policies published by the Department of Citywide Administrative Services on the issue."

A spokesperson for Queens Borough President Melinda Katz said they had to review the legislation before commenting and that the office has existing policies in place for sexual harassment.

A spokesperson for Manhattan Borough President Gale Brewer declined to comment on the legislation.

A spokesperson for Staten Island Borough President James Oddo also declined to comment on the legislation, but told Gotham Gazette the Borough President’s office follows the procedures used by city agencies and has both a male and female Citywide Diversity and Equal Employment Opportunity (EEO) officer.

Susan Lerner, executive director of Common Cause/NY, told Gotham Gazette that the omission of the City Council is part of a “pervasive disease of legislators.” “They like to prescribe vaccinations for everybody else but themselves,” she continued. “I have no idea what the motive is.”

Note: this story has been updated in several places based on new information provided by the City Council after the story was originally published.