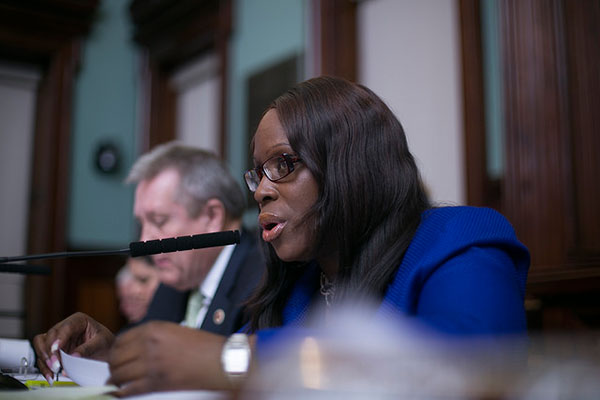 As the New York City Council continues to examine Mayor Bill de Blasio’s $88.67 billion preliminary budget for 2019, a newly created committee under Council Speaker Corey Johnson is paying extra attention to the ‘other’ budget - the capital plan - the administration’s proposed spending on schools, parks, jails and other long-term infrastructure projects.

Over the last few weeks, the new Subcommittee on the Capital Budget chaired by Council Member Vanessa Gibson, under the purview of the Committee on Finance, has been conducting oversight of agency-specific capital spending and, on Tuesday, the committee turned its eyes to the administration’s overall $45.9 billion preliminary capital budget for 2019-2022.

“For too long, the majority of our attention, the public’s attention, and the advocates’ attentions has been on the expense portion of the budget,” said Speaker Johnson, in his opening statement at the hearing, referring to the city’s annual spending on operations, typically simply referenced as the city budget. “This has left mayoral administration after administration to manage the capital budget process largely without the rigorous review it deserves,” Johnson said, giving indication to why he created the new subcommittee. This is the first budget process since Johnson was elected speaker by his 50 Council colleagues.

Johnson, and several of his colleagues after him, criticized successive administrations for allocating a majority of funds in the early phases of years-long projects, rolling over unused funds, and lumping in dozens, if not hundreds, of projects under broad budget lines.

Gibson pointed out the glaring discrepancy between how much the city was appropriating for capital projects and how much was being spent each year. “This is certainly not a new phenomenon, this is not a new concept,” Gibson said, noting that between fiscal years 2012-2017, the city had on average appropriated $36.7 billion annually, planned to spend $15.3 billion on average, and spent only $8.5 billion.

“As always, we will approach the capital budget process with caution,” said Melanie Hartzog, director of the Office of Management and Budget, in her opening remarks Tuesday, emphasizing that the city was being careful about its spending on debt from infrastructure projects. Hartzog, recently promoted to the position by de Blasio, noted in her testimony before the Council the impact of the federal and state budgets on New York City, including proposed cost shifts for MTA capital to the city -- a proposal from Governor Andrew Cuomo that is being debated in Albany -- and the devaluing of a federal tax credit that incentivizes the creation of affordable housing. She also reiterated many of the new and ongoing investments made by the administration in traffic safety, flood mitigation, transit infrastructure, schools, affordable housing, economic development and public housing.

Hartzog said the administration has taken steps to provide more accurate assessments of capital needs, by investing at least $50 million for agencies to plan and review projects before funding is put toward them. The administration has also increased staffing at agencies with large capital needs to focus on project planning and management, she said.

A key factor in possibly speeding up capital projects, Hartzog said, is design-build, a streamlined process that would allow the city to solicit combined design and construction bids for infrastructure projects. To use design-build, the city requires approval from the state, where passage has been elusive thus far, though there is the possibility this year of authorization for specific projects. It’s one of many key issues that the de Blasio administration has been pushing in Albany as Cuomo and the state Legislature negotiate the state budget.

“Applying the design-build approach would shave hundreds of millions of dollars from the cost of projects and reduce completion times by 18 months on average,” Hartzog said at the hearing. The city wants design-build for projects like rebuilding a portion of the Brooklyn-Queens Expressway, major NYCHA repairs, and building out jail capacity to replace Rikers Island facilities, among others.

The hearing was by-and-large amicable and Hartzog repeatedly promised to work with the Council on improving its capital process, having ongoing discussions with Council Members about proposed projects in their communities and conducting more regular reviews of capital spending. But the Council could not extract concrete commitments on reforms they hoped to see.

Johnson pushed for a 15 percent cap on the difference between excess appropriated funds and the capital commitment plan, using an industry-standard ratio for budgeting capital projects. “Basically, the Council is annually presented with a capital budget to adopt that gives twice the authority to spend over what is planned...It’s my opinion that it is time for a new status quo,” he said.

Hartzog, however, said the administration has increased the level of spending in the commitment plan “significantly” and reiterated that they are working to “rightsize” agency-specific capital plans. She noted that the 15 percent contingency funding applies to projects and cannot be used as a standard for appropriations. OMB Deputy Director Charles Brisky also emphasized that contingency funding allows needed flexibility for projects and that examining the difference between appropriations and commitments could be misleading.

“If you think that there’s more to be done, we’re open to working with you and your staff to get that done,” Hartzog added.

Council Member Daniel Dromm, chair of the finance committee, focused his attention on how the city plans to raise funds for capital projects, and the debt it incurs in the process. He noted that though the city’s borrowing has largely hewed close to expectations, the administration continues to overestimate the debt it will incur down the line.

“This overestimation skews the picture of the city’s debt affordability over the plan and provides the administration a convenient source of savings for subsequent citywide savings plans,” Dromm said in his opening statement, referring to the administration’s voluntary savings program for city agencies, which the Council has criticized for an inadequate focus on creating actual efficiencies.

Hartzog pushed back, calling it a “little bit of an apples-to-oranges comparison.” Her colleague, Brisky, explained that city borrowing was for projects that are years into construction or had already been completed, while the commitments were for future projects. “That’s a little bit harder to project,” he said.

When Gibson pushed for more detail on individual capital projects, yet again the budget officials demurred. “Are you willing to commit with us to looking at...how we can itemize some of those budget lines to look at specific projects and delineate a little bit of the large, overly-broad general budget lines the Council has typically received?” Gibson asked.

Hartzog agreed, but added, “I will say that, and I’m sure you agree with me, what we don’t want to do is cause any delay in any projects getting done.” She cited the Department of Environmental Protection which has large pots of capital funding set aside for emergencies that are hard to predict.

Although fiscal monitors have generally praised the de Blasio administration’s handling of the city’s finances, the Council’s criticism tracks with reports by independent watchdogs that the city’s capital planning needs to be more efficient.

“Rightsizing and right timing the capital plan is necessary for a more effective and more transparent capital planning process,” stated a recent report by Citizens Budget Commission. “Reducing planned commitments in the early years of the plan to a more attainable level would require the City to clearly articulate its capital priorities and immediate needs. It would also facilitate improved tracking of capital projects and allow for more accurate projections of City borrowing.”