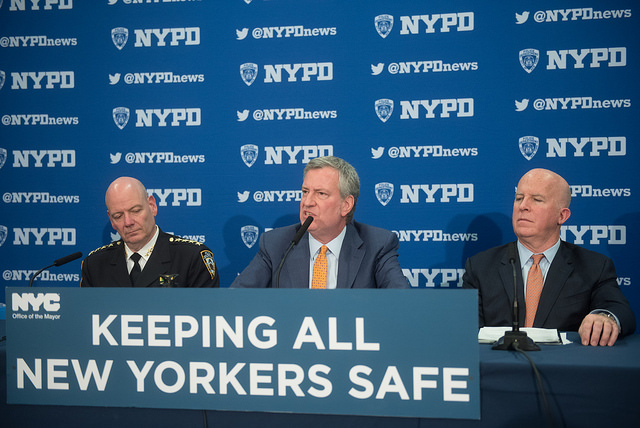 “It seems to me that there’s systemic failure there,” said Williams in a phone interview. The initial request was made in a letter dated August 11 and co-signed by Council Members Ritchie Torres and Robert Cornegy representing the Black, Latino and Asian Caucus, Council Members Antonio Reynoso and Ben Kallos representing the Progressive Caucus, and Council Member Andrew Cohen, who was then chair of the Council’s mental health committee.

The letter was sent shortly after the shooting death of Dwayne Jeune, a 32-year-old resident of East Flatbush, Brooklyn, in Williams’ district. Jeune was tazed and then shot by officers, who responded to a 911 call from his mother, when he advanced on them with a knife. Jeune’s mother had told a 911 caller that her son was mentally ill and was not acting violently. In January, the Jeune family filed a wrongful death lawsuit against the city, seeking $20 million in damages.

Since then, even though police officials have signaled support for the task force proposal, there has been little action.

The letter called for a task force to be convened and for it to complete its work within 60 days, conducting a top-to-bottom review of NYPD protocols; the department’s implementation of recommendations made last year by the NYPD Inspector General; and a look at how the administration’s much-touted Crisis Intervention Training (CIT) can be integrated with the 911 system. The Council members insisted that the task force include the chairs of the Council’s Committees on Mental Health and on Public Safety, mental health and police reform advocates, and people directly affected by officer-involved shootings.

“We keep having people who simply need help end up dead because they reached out in times of emergency,” the letter reads. “The natural consequence of this will be those New Yorkers suffering from episodes of poor mental health, as well as their loved ones, hesitating to ask for help from emergency services.”

The mayor himself showed initial reluctance to agree to the proposal. At an unrelated news conference on August 3, after Williams had first floated the idea, de Blasio said, “I don’t personally see the need for a specific task force because I think it’s an area of tremendous concern right now both at City Hall and at the NYPD to continue to improve the NYPD’s ability to address situations involving emotionally disturbed people.”

The number of 911 calls regarding EDPs, de Blasio noted, were “staggering,” about 150,000 the prior year. “[I] would say given the intense concern at City Hall related to mental health and the focus the NYPD has put on it, the right ideas are in place. We now have to just continue to deepen our implementation of those ideas,” he said, touting the ThriveNYC mental health program and the NYPD’s Crisis Intervention Training for officers to handle situations involving people with mental illness.

But the city hasn’t gone far enough, say the Council members who signed the August letter and who, in the aftermath of the shooting death of Saheed Vassell in Crown Heights, Brooklyn last week, are renewing their push for the task force. “It’s seven months later and nothing’s happened,” said Williams. “It’s concerning. The NYPD is ready and willing but now it’s on City Hall.”

“You have to look at what’s happening from a bird’s-eye view,” he added, “because we can’t just keep going along with the status quo where people in crisis, who need mental health treatment, are being killed.”

The Daily News recently reported that only about 8,200 of the NYPD's 36,000-member force have gone through the CIT training.

As far back as September, the NYPD expressed support for the task force. At a hearing of the public safety committee last month, NYPD Deputy Commissioner Susan Herman reiterated that support, for either a new working group or reconstituting the mayor’s 2014 Task Force on Behavioral Health and Criminal Justice. “[W]e have been continuing to work even as that hasn’t yet happened,” Herman said. “We did a pretty substantial review within the police department of our response to people who are mentally ill quite recently and are in the process of implementing several recommendations. So the work has continued.”

When could they expect to hear news of the task force, Williams asked.

Mayoral spokesperson Eric Phillips did not respond to multiple requests for comment for this article.

“Obviously the most recent tragedies kind of highlight the fact that we need that task force,” said Council Member Cornegy, at City Hall on Monday, saying he would directly reach out to the mayor’s office to see if there has been movement on the request. He did say that he had “heard through the grapevine” that the NYPD is in the process of setting up the unit but that there had been no official word of how far along it was.

Cornegy said he is proposing a bill that would create a separate crisis hotline for EDPs, similar to 911 and 311. “NYPD should not necessarily be required to come out and be the first line of defense when you have mental health situations, whether they are egregious or whether they’re mid-level,” he said, noting that Saheed Vassell had past encounters with the police because of the lack of an alternate system. “I believe and the [Vassell] family believes that if that step had been available to them early on then they may have had a better treatment plan for his success as a person living with mental illness in the community.”

Council Member Cohen, similarly, introduced a number of bills late last year (which were reintroduced this year) that would require the NYPD to provide more data regarding interactions with people suffering from mental illness.

“I think that there’s more information needed about EDP calls,” Cohen said outside the Council chambers on Monday. “It seems to me...the people who are getting shot by the NYPD seem to be disproportionately EDPs…These tragedies are mounting so time is of the essence. I’m not sure why it’s taken so long to get a response. That’s something you’re going to have ask the other side of the building.”

Police reform advocates have long criticized the mayor and his administration for not acting urgently enough, particularly at a time when a national conversation is happening around the killing of unarmed black men at the hands of police officers and the lack of accountability by police departments. “I think absolutely the mayor has show he’s not giving real credit to these calls from the Council members for a task force,” said Yul-san Liem, a representative of Communities United for Police Reform and co-director of the Justice Committee. “At the same time, people in distress, people who are mentally ill, are still being brutalized and killed...We need a complete overhaul of how we treat people in emotional distress or with psychological disabilities.

Liem noted that after each incident in the recent past involving use of force against mentally ill people, the administration has fallen back on the argument that they are continually training and retraining officers to handle such situations. “But that’s really rhetoric to shield the police force from accountability and making substantial changes.”