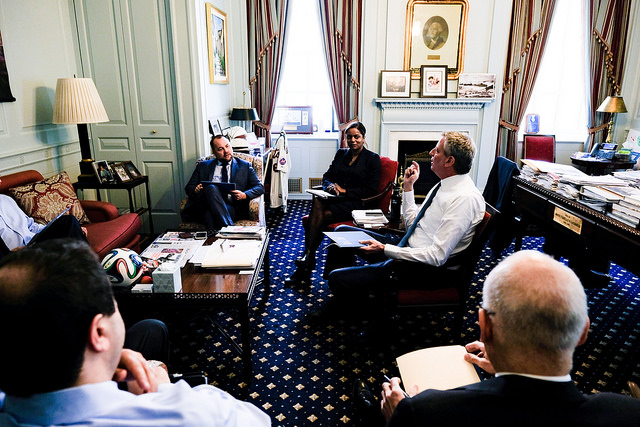 Mayor Bill de Blasio says he doesn’t have the money. The City Council says it is very much there.

On April 26, the mayor released his executive budget proposal for the 2019 fiscal year, an $89.06 billion spending plan that he called “a downpayment on a more fair future for New Yorkers.” But the plan didn’t include major priorities previously outlined by the City Council, namely $212 million to fund half-priced MetroCards for thousands of low-income New Yorkers, a one-time $400 property tax rebate for middle-income homeowners that would cost $187 million, and a $500 million infusion of funds towards the city’s reserves.

About $900 million in total -- nothing to sniff at, even amidst plans to spend $89 billion.

While maintaining that “progressives need to be fiscally responsible,” de Blasio explained to reporters at City Hall why he’d chosen instead to fund other items, including additional money toward city schools that the state had refused to provide in its recently passed budget, a new cybersecurity initiative, pedestrian safety infrastructure, childhood literacy programs, social services at homeless shelters, and repairs in public housing. He said that due to more revenue than projected, the city was able to cover several “hits from Albany,” including less school aid than expected, and still have money for new spending from prior budget outlines, while maintaining strong reserves.

City Council members, led by Speaker Corey Johnson, swiftly pushed back, saying that the mayor was being short-sighted in not funding those three Council priorities and continuing its counteroffensive as negotiations head into their next phase ahead of the July 1 start of the new fiscal year.

But are the mayor and the Council really talking about the same pool of money? Does de Blasio’s spending plan really fund his priorities while leaving the Council’s off the ledger unless he agrees to make cuts?

At the crux of the difference between the mayor and the Council are differing estimates of revenue projections, savings, and efficiencies put forward by the Mayor’s Office of Management and Budget and the Council’s finance division.

In its official response to the mayor’s preliminary budget, his first spending plan for next fiscal year, the City Council found roughly $1.82 billion in additional resources to expend between the current fiscal year (FY18) and next (FY19) -- including reestimates of spending, savings and agency efficiencies, and a more generous tax revenue forecast than the administration’s. And Speaker Johnson called for spending about $1.61 billion of that amount over the two fiscal years on the Council’s priorities and unfunded state mandates -- including funding the MTA’s Subway Action Plan, implementing raising in the age of adult criminal responsibility, and funding a juvenile justice program that lost state funds -- leaving $211 million on the table for the 2020 fiscal year.

An economist in the City Council’s finance division explained to Gotham Gazette that OMB’s tax forecast tends to be far more conservative than the Council’s. For instance, OMB overestimates how much money to set aside to account for people not paying their taxes, the economist said. Lower forecasts of revenue also give the administration more flexibility for mid-year budget modifications, which often increase spending by hundreds of millions. Downplaying possible, even expected, revenue is a common, and in some ways prudent, budgeting tactic.

After the release of the preliminary budget in January, the Council predicted about $652 million in additional tax revenue in 2018 and $599 million in 2019, for a total of $1.25 billion. The Council also found $528 million in agency efficiencies and savings, rolled over $300 million from the general reserve from 2018, and accounted for $257 million in lost revenue from taxi medallion sales and state sales taxes. The result: the aforementioned $1.82 billion in new resources. Of that, $899 was pegged for the three main demands in the upcoming budget (discounted Metrocards, property tax rebates, more into reserves), $227 for other agency spending, and $485 for unfunded state mandates [see table below]. 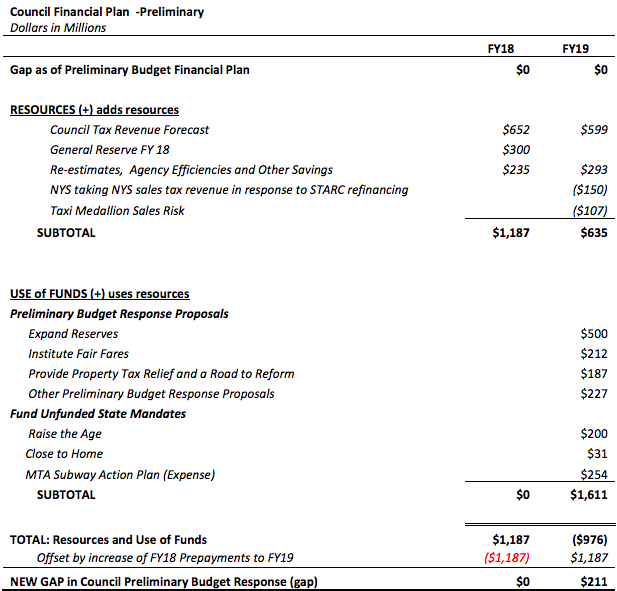 The de Blasio administration clearly has different plans. OMB’s latest forecast, included in the mayor’s executive budget, found $973 million more in city tax revenue in 2018 and $77 million in 2019, totalling $1.05 billion (while accounting for the lost sales tax and medallion revenue.) They also found $754 million in savings and efficiencies, surpassing the Council’s numbers. And the $300 million general reserve was available to them as well. In total, for an apples-to-apples comparison with the Council’s projections, the administration had about $2.1 billion at its disposal.

But the mayor directed large amounts of funding to various agencies, increasing new agency spending across both fiscal years by $1.48 billion, and directing $530 million towards the unfunded state mandates, leaving little funding from that same pot of resources to spend on the Council’s priorities.

Johnson and Council Member Daniel Dromm, the finance committee chair, said in a statement that they were “disappointed” with the mayor’s executive budget. But they were optimistic that new revenue combined with savings and efficiencies, “has the potential to go a long way towards our goals of strengthening the social safety net, fighting for the middle class, and being responsible with taxpayer money.”

Johnson has been especially vocal about the “Fair Fares” Metrocard initiative, arguing that it is a matter of equity and opportunity that would clearly help de Blasio reach his goal of making New York “the fairest big city in the country.” The speaker, a Democrat like the mayor, has also stressed the property tax rebate, though other Council members have made it more of a priority in their public statements.

The Council has also pushed for more transparency in the mayor’s budget and has been critical of the administration’s most recent budget modification request, which was approved in April. It has urged de Blasio to find more savings, but hasn't necessarily advocated to spend fewer dollars, but rather to spend the money available better, with greater efficiency across city agencies.

OMB’s tax revenue predictions are likely to be revised further upwards, more accurately reflecting projected revenue through June, by the time the budget is adopted. On Monday, the Council will began hearings on the executive budget, with OMB officials testifying on the latest updates to the administration's spending plan, including defending priorities and explaining where the money is coming from and how much is available. Commissioners from the more than 40 mayoral and city agencies will also appear before the Council in the coming weeks, then negotiations move almost exclusively behind closed doors.

On Monday several Council members harshly criticized officials from OMB on the administration’s refusal to fund the three big Council priorities. Speaker Johnson expressed “deep disappointment and frustration with what is contained in this executive budget, or more accurately what is excluded from this budget.”

Johnson repeatedly emphasized the lack of respect with which the mayor was treating him and his colleagues. “[W]ith the release of the executive budget, it is not clear that [Mayor de Blasio] wants to work with us to collaborate on a budget that embodies the priorities of both the administration and the Council,” he said.

Johnson noted with derision that the lack of funding for the Council’s priorities was clearly because of a lack of political will on the part of the mayor. Of the 50 proposals in the Council’s budget calling for new expenditure, the administration funded, partially and fully, only 11, Johnson said. At the same time, the administration added $965 million in new spending for the 2019 fiscal year alone after the preliminary budget was released three months ago. “I really do not want to hear this morning that there’s no new money,” Johnson said. “You all found plenty of money for what was important to you.”

Fair Fares occupied much of the hearing, with several Council members flabbergasted by the mayor’s steadfast refusal to fund what would seem to be a no-brainer for a progressive. De Blasio has insisted on a state-approved tax on the wealthy to fund the proposal, and OMB Director Melanie Hartzog reiterated that argument for each member that inquired, insisting that the mayor does support the proposal but does not want to send more city funds towards the state-run MTA and instead wants “a dedicated funding source” for Fair Fares.

“It’s not subsidizing the MTA, it’s helping poor people,” Johnson retorted, noting that the mayor had chosen to subsidize the city’s ferry service, at $6.50 for each ride, in a system that carried fewer than 4 million passengers last year, compared with nearly 6 million daily riders on the subways.

As was also expected, Council members at the hearing pushed for the property tax rebate and for adding more funding to reserves. And they took issue with the fact that other programs and initiatives -- including NYCHA senior centers, after-school programs and summer youth programs -- were also left underfunded in the mayor’s budget plan, while spending in certain areas like homelessness was skyrocketing with few concrete results. Council Member Mark Gjonaj said the administration was “spending like drunken sailors” while the city continued to become more unaffordable for everyday New Yorkers. Without significant changes to the budget, he said, “I don’t see how I can support this budget plan and will work to encourage my colleagues to reject it.”

Note: this story has been updated with details from Monday's initial executive budget hearing at the City Council.