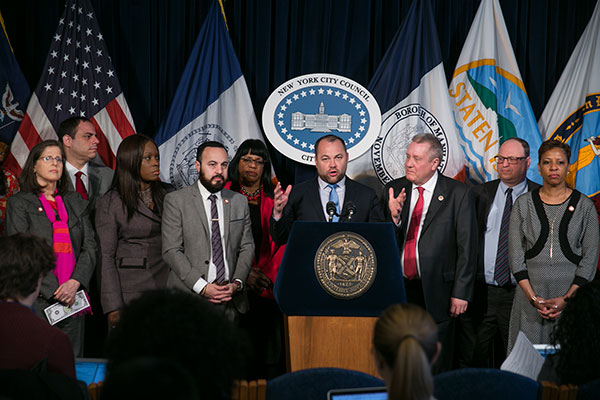 The New York City Council appears to be gearing up for a tense budget fight with Mayor Bill de Blasio, releasing a telling early counter on Tuesday in its official response to the mayor’s $88.7 billion proposed budget for next fiscal year, put forth just after a tense hearing with budget officials about modifications to the current budget.

The Council’s response to de Blasio’s preliminary budget, the first under Council Speaker Corey Johnson and released after weeks of hearings, calls for millions in new spending, additional reserves for a rainy day, and more accountability and transparency in the city’s budgeting process.

The priorities enumerated in the document are a clear indication of the type of independence that Johnson has promised since taking office, with a focus on “strengthening the social safety net, fighting for the middle class and handling taxpayers’ money responsibly,” as Johnson put it at a news conference at City Hall.

Among key recommendations, the Council is calling on the mayor to fund “Fair Fares,” a proposal formulated by a group of transit advocates to provide half-price MetroCards to 800,000 low-income New Yorkers. The Council had pushed for the proposal last year as well but de Blasio shot it down repeatedly, even a proposed pilot program, insisting that it was the state’s responsibility to fund it, given that the MTA is a state-run entity. Fair Fares did not make it into the recently-passed state budget, and the Council is now calling for $212 million for the program, which it estimates would also benefit about 16,411 veterans living in poverty and would extend the program to veterans attending city colleges.

Johnson and the Council are also pushing for a $400 property tax rebate for homeowners with incomes below $150,000 -- which would cost about $187 million and cover about 487,000 households, they said -- and called on the mayor to form a long-promised property tax reform commission jointly with the Council to examine structural problems and propose reforms.

Almost every item highlighted in the budget response seems likely to elicit consternation from the mayor. Though the administration has put nearly $5.5 billion towards reserve funding, to prepare for an anticipated economic slowdown, the Council is calling for another $500 million. The Council is also insisting on another $2.45 billion in capital funding over four years for the embattled public housing authority, NYCHA, to repair heating and water systems and to build more senior housing.

The Council is calling for a reassessment of spending on homeless shelters and for education spending to be increased to “Fair Student Funding” levels. Members are demanding that the mayor’s next budget iteration, due out later this month, include a plan for $485 million in unfunded mandates foisted on the city by the state. The Council is proposing $227 million in new and baselined agency funding. And, it is emphasizing the need for more transparency in both the expense and capital budgets, proposing 123 new units of appropriation that would provide a more detailed breakdown of budgeting and pay the way for greater accountability.

Johnson emphasized that the increase in funding that the Council is advocating is offset by revenues, savings, and agency efficiencies and reductions. “I believe this is a pretty aggressive response to what was presented to us and we expect a real negotiation from now until the executive budget,” he said, later insisting that the Mayor’s Office of Management and Budget had set lower estimates for revenues and agency savings than the Council.

“When we go down, we’re adjusting the available resources in what OMB gave us by $1.8 billion,” he said. “We believe that our forecast, in between what [the Independent Budget Office] is saying and what OMB is saying, we view it as $1.8 billion...We’re not just spending a lot of money. We’re also cutting back on savings in certain agencies, especially DHS [Department of Homeless Services].”

The mayor’s office quickly responded to the Council’s proposals. "Times are increasingly tight, and the $418 million we just spent to fix the state-run subways, which the Council supported, will only make this year’s budget process all the more lean,” said Freddi Goldstein, a mayoral spokesperson on budget matters. It was a clear reference to Johnson’s position that the city pay for half of the $836 million MTA Subway Action Plan, which the city is being forced to do under a provision that was included in the state budget earlier this month. (That $418 million includes $254 million in operational costs -- which is included in the Council’s response -- and $164 million in capital costs.)

The Council’s more “aggressive” approach was already on display Tuesday morning, at a rare finance committee hearing on proposed modifications to the budget for the current fiscal year ending June 30. More often than not, in the past few years, the Council has easily approved the periodic budget modifications so the city can adjust spending as needed. But this year the adjustment was the subject of a standalone hearing, led by Council Member Daniel Dromm, chair of the finance committee.

The administration had requested the Council’s approval on $970 million in spending reallocations across city agencies. But Council members seemed unwilling to pass up the opportunity to ask hard questions of OMB officials, mostly relating to a $152 million proposed increase in spending on the Department of Homeless Services.

“They want a modification, they have to come to the City Council,” Johnson flatly explained, when Gotham Gazette asked whether the Council was using the budget modification as leverage over the administration. “We’re not a rubber stamp. We have oversight questions, we have questions that need to be answered.”

Dromm, who had earlier emphasized to Gotham Gazette that the hearing was simply about more transparency, added, “It’s a new Council, it’s a new situation. We have new expectations and we expect the administration to live up to those expectations.”