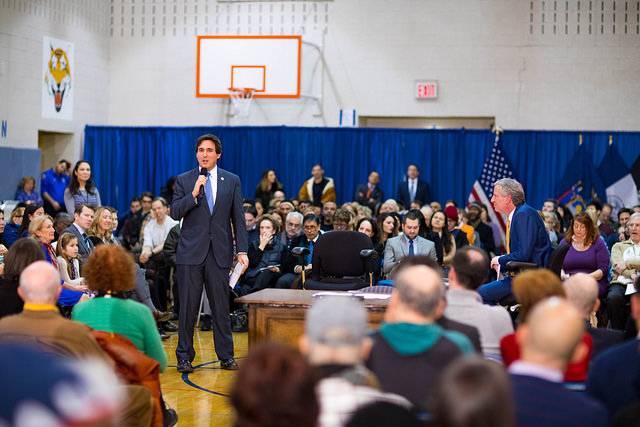 It was the last of five hearings, one in each borough, to launch the mayor’s charter revision commission, which will hold other listening sessions as it moves ahead with its work -- it plans to prepare a preliminary report early this summer and have a set of proposals by early September that will be presented to voters on their November ballots.

On Wednesday evening, community members delivered their insights into the way the commission can revise the city’s charter, a document outlining municipal governance, to improve democracy in New York City. De Blasio has charged the commission with reforming campaign finance to reduce the influence of big money and increasing voter turnout, though by law it can look at the entire charter. Topics such as police discipline and the role of community boards, among many others, have been discussed at the five public hearings thus far.

City Council Member Ben Kallos, who represents a large swath of the Upper East Side, testified at Wednesday night’s meeting, and though he said the campaign finance system currently in place is “the model campaign finance system in the country,” he also agreed there’s “room for improvement.” Kallos, who last term chaired the Council committee with oversight of the city Campaign Finance Board and has been a longtime reform advocate, said he’d like to see changes to “shift the balance of power away from the wealthy and…back towards the people it was designed to serve,” and he believes those changes can be implemented effectively without “putting this existing system at risk.”

The city’s current paradigm includes a public matching system that provides six dollars of public money for every dollar of private money raised from qualifying donors up to $175.

Kallos' first recommendation outlined on Wednesday night is to move “big money out of New York City politics and empower small donors” by increasing the cap on pubic funding from 55 percent of each candidate’s spending limit, where it currently stands, to 85 percent of the spending limit.

He suggested the city should increase the match of small-dollar donations over larger donations, or “matching small donations of $100 or less at a higher rate than the larger contributions.” When later questioned on the issue by commission Vice Chair Rachel Godsil, he said this change would encourage candidates to “hustle in their own communities for $10 donations” instead of looking outside their district for big money.

Kallos urged the commission to consider lowering the contribution limit from the current $5,100 -- “which is more than you can give to the President of the United States,” he said -- to $2,000 for citywide candidates and $1,000 for City Council candidates. He also touched upon introducing democracy vouchers, a program used in Seattle that provides eligible voters with money to give candidates. And, Kallos discussed ballot access reform, before suggesting the charter should be amended to end the “revolving door” between city and state politics in New York.

In many cases in 2017 and prior city election cycles, he said, “you saw the [state] assembly members coming in as virtual incumbents, raising and spending — I think in one case I think they spent $1 million — and if you have these musical chairs where people are going back and forth.” Replying to a follow-up question from Commissioner Larian Angelo, Kallos continued, “the communities never get an opportunity to have other representation and it defeats the whole purpose of term limits.”

When pressed by Godsil on the top three recommendations he believes are the most important, Kallos said he “would die on a hill” for full public matching. “As a City Council member who is termed out with 38 other City Council members, I am terrified of 2021,” he said, referring to the next cycle election cycle when about three-quarters of the Council (and all of the borough presidents and all three citywide elected officials) will have to leave office due to term limits. “I am terrified of 38 people running for offices and raising $3,850 to $4,950 from people and those dollars coming from real estate,” he said, adding the current system sees city officials “selling out their communities for real estate contributions to their campaign.”

Also discussing campaign finance reform at Wednesday night’s hearing, Alex Camarda from Reinvent Albany, an organization that advocates for government transparency and accountability, recommended moving lobbying enforcement out of the City Clerk’s office into the Conflicts of Interest Board, as well as consolidating all city administrative functions pertaining to campaign finance, ethics, and lobbying under on entity.

Camarda echoed Kallos’ suggestion to increase the public funding cap for campaigns to 85 percent to “effectively eliminate it.” And recommended the board change the charter so the CFB can only provide six-to-one matching on small campaign donations, not all campaign contributions: “It’s not widely known in this city…you’re actually matched six-to-one on the first $175 of any contribution,” he told the panel. “So if a candidate’s running for office there’s a real incentive to actually just raise large contributions, get the match on $175, and then not be inclined to raise money from smaller contributions.” 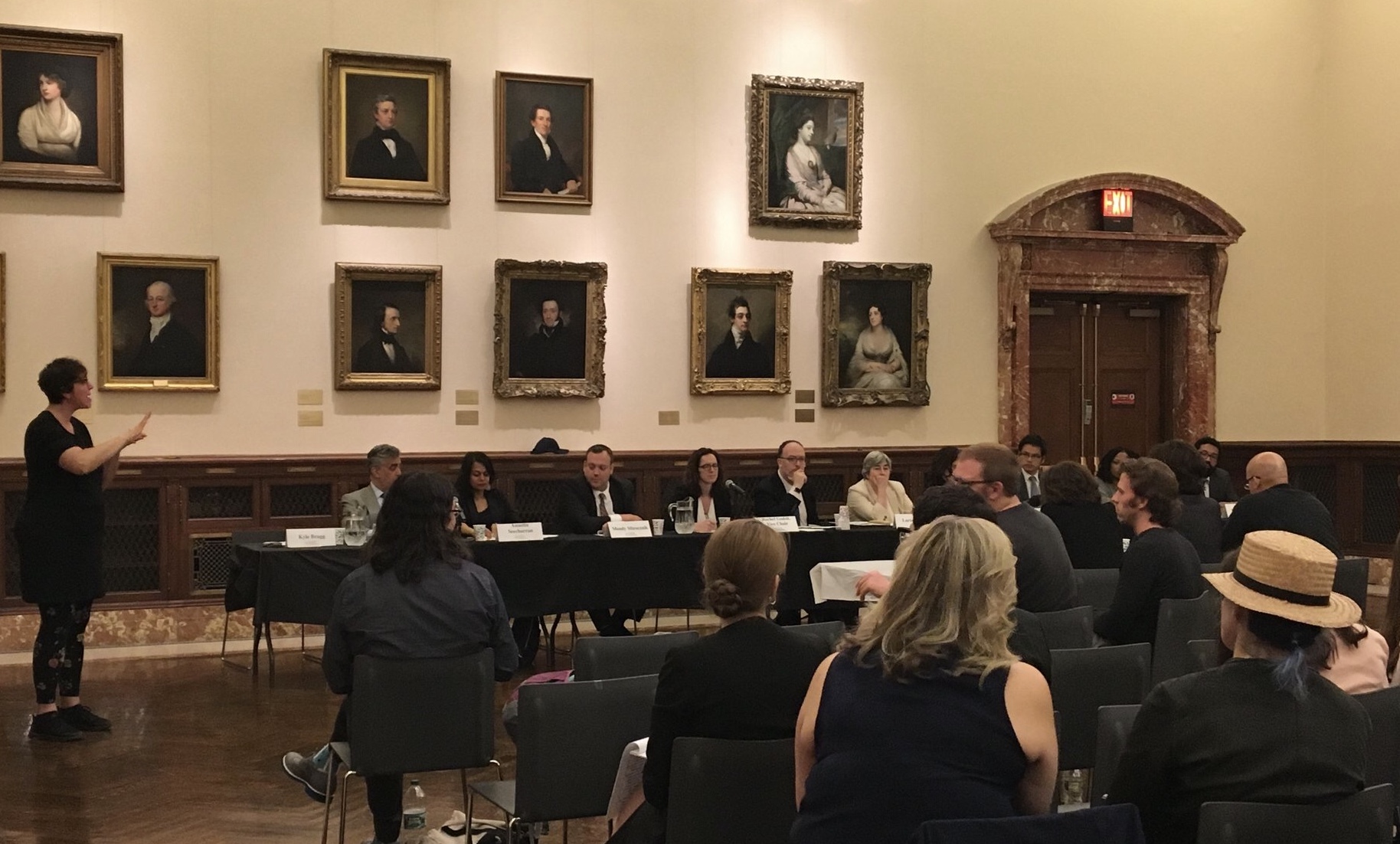 Also in Reinvent Albany’s recommendations, there are suggestions to expand the ‘Doing Business’ definition to include clients of lobbyists, which Camarda said is “a fairness issue,” and also subcontractors doing large amounts of work on city contracts. Camarda also urged the commission to strengthen disclosure laws so that limited liability companies (LLCs) making independent donations to campaigns can be identified. When asked by Commissioner John Siegal to elaborate, Camarda said: “We know that in state election law there are provisions that say the donor of the contribution must be provided, so we think requiring that…is something that would be consistent with state election law.”

Regarding the city’s voting system, Camarda said Reinvent Albany is supportive of instant runoff voting, also called ranked choice voting — where, instead of choosing a single candidate, voters rank the candidates in order of preference to avoid actually holding a runoff election in the event that no candidate hits the required 40 percent threshold in a citywide primary. He said this would improve the outcome of primary elections for citywide offices, all special elections, and for military and overseas voters.

Several others spoke about instant runoff voting on Wednesday night, with founder of the Center of Collaborative Democracy Sol Erdman telling the charter commission ballot reform would help diminish the trend of negative campaigning — “if you have two top candidates for any office, the easiest way to win is simply to undercut the other candidate,” he said — and lead instead to a rise in issue-based campaigning.

“There is a proven technique for eliminating the benefits of negative campaigning, and that’s rank choice voting,” he said. “Why would this city, which is the leader in so many areas, not want to adopt a method of voting that basically will reward candidates for talking issues, for trying to build coalitions across social, economic, and political lines, and will result in candidates who win being much more accountable?”

When the commissioners asked election and campaign finance lawyer Jerry Goldfeder, who had also testified, about how instant runoff voting will enhance voter turnout, he replied: “I don’t know that instant runoff is going to increase voter turnout, I don’t think that’s the purpose. The purpose is to save taxpayer dollars, to make the elections more efficient.”

Goldfeder said the commission should push for better voter registration opportunities, which he believes could lead to a more participatory public. “Allowing people to register up to ten days before a primary, or a special, or a general, will get us more people registering,” he said. This was in response to Siegal’s observation that “The trends are abysmal in this city; the plunge in voter participation since 1969 is more than half the people who voted 40 years ago, don’t vote.”

Opening up party primary elections to independent, or unaffiliated, voters was also discussed at length by members of the public and concerned organizations. “Everyone should be allowed to vote in the first round of voting, regardless if they are registered to a party or not,” a representative from the Queens Independence Club said, adding that one million voters in New York are independent voters.

As in previous hearings, the issue of participatory budgeting — that sees certain City Council members set aside capital funds for community-decided projects — was also raised on Wednesday night by community members hoping to institutionalize the concept. High school senior Ilana Cohen, who founded PB Youth, testified on the issue and was asked by Commissioner Mendy Mirocznik her opinion on the role city schools are playing in increasing civic engagement in young people.

“New York City public schools, in my experience, are incredibly lacking in terms of civic engagement,” she said. “I mean, we learn about the founding of the national constitution, but we learn nothing about state or city government, which is why I love participatory budgeting, because anyone can get involved and you vote starting at age 11.”

Though not on de Blasio’s list of focus areas, police discipline is an issue that’s been raised frequently throughout the charter commission’s initial hearings. On Wednesday night, Commissioner Siegal, while responding to testimony about police violence, admitted there are “real issues with the current system that prevents citizens knowing what’s going on in cases unless it goes to trial.” “That doesn’t make any sense,” he added.

Other matters raised at Wednesday’s hearing include the right to housing for all New Yorkers, expanding paid parental leave to all city employees, and “correcting the injustice” around allocating street vendor licenses.

With a hearing in each borough now behind it, the commission is expected to deliver an initial draft list of recommendations in July.

photo above: Wednesday's charter revision commission hearing in Manhattan, via the charter commission