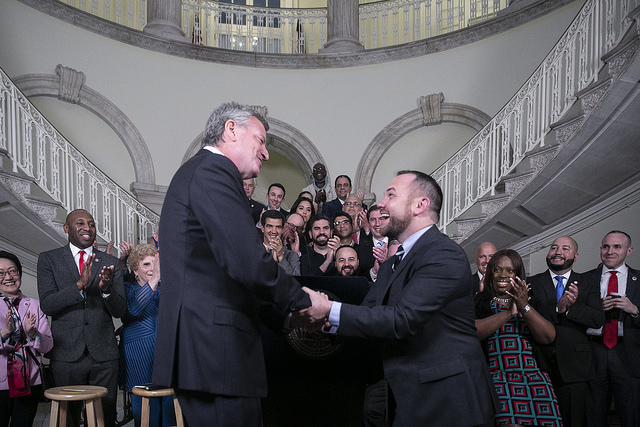 Mayor Bill de Blasio and City Council Speaker Corey Johnson on Monday announced an agreement on an $89.15 billion budget for the 2019 fiscal year that includes key Council priorities that the mayor had been hesitant to fund for months.

“This budget is profoundly responsible, it is balanced, it is progressive and it is early,” de Blasio said at the ceremonial budget handshake with Johnson and other Council members at City Hall on Monday evening, about three weeks before the July 1 deadline that is the start of next fiscal year.

The latest spending plan is a slight uptick from the mayor’s $89.06 billion executive budget proposal released in April, and a total $480 million increase from the $88.67 billion preliminary proposal put forward by the administration in February. Overall, it reflects a $16.45 billion increase from the $72.7 billion budget that de Blasio inherited when he took office in 2014. Asked about that significant growth, de Blasio said on Monday, “It’s an investment model, it’s a strategic investment concept,” insisting that much of the city’s prosperity over the last few years stemmed from his administration’s responsible spending and fiscal management.

The money has certainly been there to spend, even as the budget has grown so large, the city has put record sums in reserves, though watchdogs do warn of long-term fiscal impacts of the large growth in public sector headcount de Blasio has overseen.

It was Johnson’s first budget as speaker and he notched a massive victory, convincing an initially reluctant de Blasio to provide $106 million to partially fund the ‘Fair Fares’ program that will provide half-priced MetroCards to New Yorkers that live below the federal poverty line. The Council members in attendance struck an especially celebratory tone.

“I believe that Speaker Johnson said the words ‘Fair Fares’ to me an unfair number of times,” de Blasio mused of Johnson’s almost single-minded focus on the issue in the lead up to the budget deal. The speaker headed a concerted campaign for the program, using digital and social media and grassroots advocacy. All but three members of the City Council had expressed their support for it by this week; it was clearly the speaker’s top priority in negotiations with the mayor.

De Blasio said Monday that the program will launch in January 2019 and run through the rest of the fiscal year, and will be implemented by the city rather than the MTA, in a similar fashion to the Human Resource Administration’s cash assistance and food stamp programs. Following the six-month rollout, the city will evaluate participation and cost to decide on future funding, Johnson later said as he insisted that both he and the mayor will continue to push for an additional millionaires tax approved in Albany to fully fund the program.

The mayor also added $225 million in funding to reserves, conceding nearly half of the Council’s $500 million demand for more rainy day funds. About $125 million was added to the general reserve, bringing it to $1.25 billion each year, and $100 million to the Retiree Health Benefits Trust Fund, increasing it to $4.35 billion, while the capital stabilization reserve remained static at $250 million.

De Blasio also touted other top items that had been outlined in earlier iterations of the budget, namely $125 million in increased fair school funding, added resources for the New York City Housing Authority (NYCHA), an expansion of 3-K for all, and funding for police body cameras.

“This spending plan will strengthen our social safety net and do more for New Yorkers who are struggling to get by on less,” Johnson said as he thanked the mayor for “good faith” negotiations over the last few months.

“We are taking a sharp-eyed, sober approach to the future,” he added, detailing a few of the initiatives funded in the budget, including $150 million in additional capital funding over three years to improve accessibility for the disabled at city schools and an expansion of of the summer youth employment program from 70,000 to 75,000 slots.

Johnson also highlighted the hundreds of millions of dollars that the city previously committed to the MTA Subway Action Plan, as Johnson had wanted it to but de Blasio did not, after the state budget forced the city's hand. He also stressed additional investment in supportive housing, to accelerate the pace of units opening.

The deal, according to a press release from the mayor's office, also increases and baselines funding for the Emergency Food Assistance Program "to $20 million annually" and adds $3.5 million "for additional litter basket pickup" to avoid trash can overflow on street corners.

The final budget does not include a $400 property tax rebate for thousands of homeowners -- another key Council priority -- since the administration and Council announced late last month that they would convene a property tax commission to review the system and propose reforms. The commission is expected to begin its work with the July 1 start of the new fiscal year and will hold ten hearings to seek public input.

The budget agreement announcement came hours after another, more tense news conference at City Hall where de Blasio addressed the city’s agreement, announced Monday morning, with federal prosecutors to accept a federal monitor for NYCHA. The deal also requires the city to provide billions more in funding for the ailing housing authority over the several years, and that funding will be reflected in the capital budget when it passes the City Council later this month, de Blasio said.