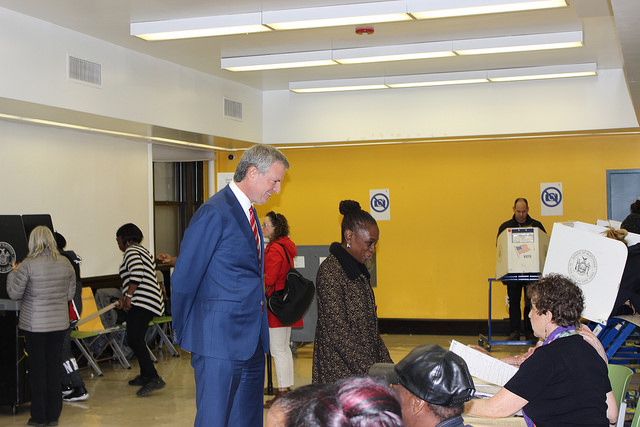 The report was prepared by the commission staff after two initial rounds of hearings held in the last three months across the city at which members of the public, advocacy groups, subject matter experts, and elected officials recommended improvements to the City Charter. “New Yorkers have been engaged since the start of this process and this report reflects the wide range of issues we discussed in all five boroughs,” said Cesar Perales, commission chair, in a statement.

Though the commission was empowered to examine the entire charter, it closely followed the mayor’s brief in empaneling it: that it look at improving electoral participation and reducing the effects of money in city elections. At a meeting on Tuesday at Pratt University, the commission members discussed their positions and concerns on the staff report.

An outline of the commission report was provided to Gotham Gazette and other news outlets Monday evening. To reform the campaign finance system, the staff recommends in its report that the commission should consider ballot proposals to lower donor campaign contribution limits and enhance the Campaign Finance Board’s voluntary public matching funds program, which currently matches small-dollar contributions at a 6-to-1 ratio and is seen as a national model. The CFB caps the amount of matching funds a participating candidate can receive at 55 percent of the spending limit for the position they are seeking. The report recommends a proposal to increase that cap. Those suggestions are in line with the ones made by the CFB to the commission.

Carlo Scissura, secretary of the commission, urged caution about the level of increase in matching funds, noting that more and more candidates run for office each election cycle. "Let’s be careful of the city budget," he said. Commissioner John Siegal worried that lowering contribution limits could affect people's First Amendment rights and could only be justified with a "compelling anti-corruption rationale", while Commissioner Sharon Greenberger said the commission should carefully consider the timing of rolling out changes to the campaign finance system.

The staff report is less definitive on improving municipal elections through voting reforms, urging the commission to continue reviewing proposals such as instant runoff voting, also known as ranked choice voting, and improved language assistance services. Perales said there was no unanimity among his colleagues on instant runoffs. Some found it "intriguing" while others like Commissioner Larian Angelo wanted more data on its benefits and drawbacks. Perales also noted that the commission can do little to change election law, which falls under state jurisdiction. "This is going to be a tough one," he conceded.

Voter participation could also be improved through civic engagement, the report states. The commission has been assessing a proposal, put forward by Brooklyn City Council Member Brad Lander, to create a new Citywide Office of Civic Engagement. At hearings, commission members have spoken of the idea approvingly, and the staff report suggests that they evaluate how that office would function, how it would be structured and whether it can bolster the city’s DemocracyNYC and participatory budgeting programs. On Tuesday, though, Perales said it was another area where the commission lacked consensus. Scissura, for instance, said he was "a fan of less bureaucracy," and did not support the creation of a new office. Participatory budgeting was a more popular subject, with a few commissioners agreeing to explore ways to expand it across the city.

On community boards, the staff recommends term limits that can diversify board composition, a standardized appointment process, increased resources, and ensuring representative membership. Commissioner Marco Carrion, who is also Commissioner of the Mayor’s Community Affairs Unit, said Tuesday that the commission report was a "very good starting point" on how to democratize community boards.

The most complex and perhaps most politically charged question before the commission was whether they could make improvements to the process of redistricting City Council boundaries. There are currently 51 Council districts across the five boroughs, the lines of which will be impacted by the next U.S. Census, set for 2020. But, the charter commission may recommend to voters a change to the redistricting process, which could even include changing the number of Council districts.

The charter commission report does not take a hard position on redistricting other than recommending that the commission keep studying it, keeping in mind “procedures to address the effects of the redistricting process on the voting power of racial and ethnic minority groups,” including perhaps independent review mechanisms. The report also underscores the importance of limiting the role of elected officials in districting commissions and putting in place plans to mitigate the effects of a potential undercount in the 2020 census from the addition of a citizenship question by the Trump administration, a plan that is currently the subject of litigation. On Tuesday, it was clear that the commissioners were not in full agreement. Commissioner Dale Ho, director of the ACLU's Voting Rights Project, stressed that redistricting needs to be "more inclusive" to reflect the city's diversity, and Perales said the commissioners "need to see alternatives" to the current process to make an informed decision.

“This preliminary staff report reflects a focus on civic life and democracy in New York City — a theme that is particularly appropriate and relevant in contemporary times,” said Matt Gewolb, executive director of the commission, in a statement.

The commission’s final report is expected by the end of August and its proposals, which will be presented as ballot referenda in the November general election, are due by September 7 at the latest. The mayor’s commission is also distinct from another one created through legislation by the New York City Council, which held its first meeting on Monday evening at City Hall and aims to put its proposals on the November 2019 ballot.

[Read: Chair Says Charter Commission Will Step In Where Politics Has Slowed Reform]

Note - This article has been updated with coverage of the commission's meeting on Tuesday, July 17.