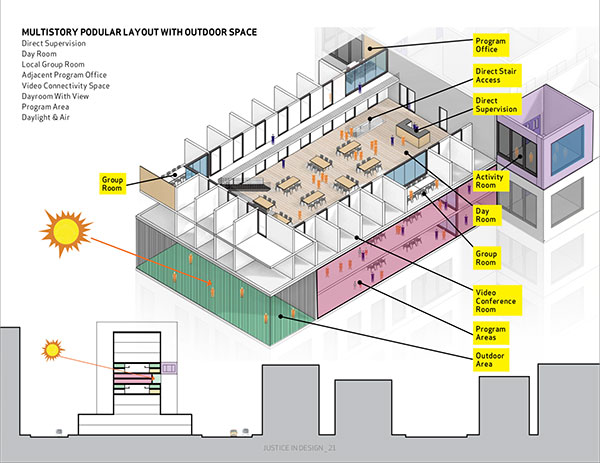 The first part of the plan is clear: the jails on Rikers Island will be closed. Less clear is the second part: what, exactly, the replacement jails will look like.

Both Mayor Bill de Blasio and the Independent Commission on New York City Criminal Justice and Incarceration Reform, empaneled by then-City Council Speaker Melissa Mark-Viverito, came to the same conclusion: Rikers – the isolated island, sandwiched between the Bronx and Queens on the East River, holding 10 of the city’s jails and over 7,000 inmates – must be shut down.

In June 2017, de Blasio announced a broad plan to do just that. His controversial proposal calls for continued reduction of the city’s plummeting jail population and the complete closure of all Rikers facilities within a period of 10 years, with remaining Rikers detainees transferred into jails in other parts of the city, using one facility in each borough other than Staten Island. For the plan to close Rikers to work, de Blasio has said, the city must get from the current 8,000-plus inmates across the city to about 5,000, while expanding or opening four facilities.

Challenges and questions remain, one of them being that the existing borough jails in Manhattan, Brooklyn, and Queens don’t have the capacity to hold even 5,000 detainees (most of the individuals held in Rikers jails are pre-trial and have not been convicted of a crime, though some are serving relatively short sentences).

Shutting down Rikers jails requires the expansion or complete reconstruction of the current facilities, as well as erecting a new one in the Bronx. However, another challenge, which may pose far greater obstacles than merely laying down the bricks of these facilities, is establishing the foundation for a new way of thinking when it comes to designing and building jails.

“What we emphasized is that we’re trying to reimagine every step of the criminal justice system and, in particular, the jail facilities themselves,” said Jonathan Lippman, the former Chief Judge of the State of New York and the chair of the independent commission, which released a study advocating for the total shutdown of Rikers Island last April, preceding the mayor’s proposal, which differs in some ways. “So, wherever we’re having the kind of haphazard, decrepit, depressing conditions that you have now, we’re trying to look at ‘what should it be if you started from scratch?’”

The question of jail design is one of the most important facing the city as it moves toward closing Rikers Island, and aims to utilize the jails themselves as part of the equation in helping people transition after a jail stay of any length and reduce the chances they will ever be back.

Among others, one task force convened by the de Blasio administration is working on the issue, while a private architecture firm, Perkins Eastman, has been hired in a $7.5 million contract to take the task force’s input into consideration as it makes design and construction plans.

The culmination of the efforts of the task force and of Perkins Eastman will first be manifested into the Capital Scope Development Project Study, set for release by the end of this year, which will gauge the costs of the project as well as assess the capacity of the current borough facilities and explore how these facilities may be expanded or completely reconstructed.

For Lippman, the new network of jail facilities that will replace Rikers would imitate a “more normative environment that supports rehabilitation while simultaneously providing the neighborhoods with a couple of amenities,” as indicated in his commission’s study. Crafting such jails would mean to upend the existing conditions on Rikers – a place that Lippman calls an “accelerator of human misery,” with rotting floorboards, sewage backups, impaired heating and cooling systems and incessant violence, according to the commission’s report – and, instead, enhance access to natural light, activity spaces, direct supervision and community involvement.

The study also indicated the importance of a facility’s geographic location, since proximity to courthouses can cut travel costs of moving detainees from the jails to courthouses and back, and visitors should have easier access to visit their detained loved ones, which is part of reducing recidivism. Rikers Island is accessible to the outside world by one bridge, and anyone attempting a visit to the island can only go by car (although private parking is limited) and bus -- there is no subway access.

In another report produced by the Lippman commission and the Van Alen Institute, providing room for civic services, retail shops or community spaces would be a basic function of a jail facility built with the intent of fully integrating into the community it’s in. Such a building would open up part of the first floor to the needs or desires of the community – say, for an art gallery, or a medical clinic, or a social services agency – while the upper floors would be where the jail operates.

“This is an opportunity for us, not to recreate what we have, but to really begin to think outside the box in terms of what we want,” said Stanley Richards, a member of the independent commission and the executive vice president of The Fortune Society, an organization that provides reentry services for formerly incarcerated people.

Richards additionally co-chairs the design committee of the mayor’s task force, where he works on developing design principles that will guide architects and general contractors in the design of the borough facilities.

“The only principles that were guiding the design and the development of the facilities that we currently have is, ‘How do you keep people detained and keep them away from society? How do you punish people?’ And that’s how they were built,” said Richards, who is formerly incarcerated himself, having spent two years in a Rikers jail. “That is not the design principles that we’re operating from.”

One important question on the table is what will be done with the existing, in-use Brooklyn and Manhattan jails, which are in especially busy areas of the city -- will they be refurbished or torn down and constructed anew, using modern design principles?

The recommendations of the commission also provide a basis for what these new facilities have the potential to look like. A network of cells that surround a common living area, for example, can make way for a system of direct supervision, where a correctional officer can oversee more detainees with improved lines of sight. Grouping detainees into housing units based on similar needs or risk-levels also allows officers to apply a more responsive approach when dealing with detainee misconduct, since the traditional approach has been to rely on punitive segregation, or solitary confinement, even for detainees who engage in low-level misconduct.

The commission also recommends that inmates have access to a sort of “town center,” or an area that would include a clinic, pharmacy, dining hall, and programming spaces, thus providing detainees more freedom of movement, and they should be furnished in a way that imitates normative settings, with fittings as basic as seated, porcelain toilets and upholstered furniture, all of which contributes to the humanization their detention. The de Blasio administration has already announced programs to provide more education and job training to inmates, and has launched the “jails to jobs” program to facilitate short-term employment for those finishing a sentence in a city jail.

The mayor and the City Council settled on the sites of the Rikers-replacement facilities in an announcement this past February, with the projected borough facilities in Manhattan, Brooklyn, and Queens to be held at the location of the standing detention centers, and the jail in the Bronx being at a city-owned tow pound lot in Mott Haven, though the Bronx site quickly became the subject of controversy and it is still unclear exactly where a Bronx jail will be built.

All sites will additionally undergo a single public review process, the Uniform Land Use Review Procedure, set to kick off either by the end of this year or at the start of 2019, involving hearings with the local community boards, borough presidents, City Council members, and the City Planning Commission. One combined ULURP was announced by the mayor and Council Speaker Corey Johnson in order to speed the process, though some have questioned if that will allow enough local input in each affected community.

“New York City is a very different environment to build in and each borough is quite different,” said Elizabeth Glazer, the director of the Mayor’s Office of Criminal Justice and co-chair of the Justice Implementation Task Force. “And, so there’s always going to be that sort of tug between the function that the jail must serve and the function that we want it to serve, and how space provides opportunities or constraints as desires.”

In May, the city’s average daily jail population fell to 8,402 – the lowest number it has reached since 1981. In a follow-up report produced by the Lippman commission, it is projected that the city could close Rikers as soon as 2024 and even have the new facilities constructed before then. Still, while it is one thing to build the new facilities, it is another to maintain them in a way that keeps them from defaulting back to today’s conditions on Rikers Island.

“It’s not a resource issue, but it is an institutional issue about how you treat people, how you classify people, how you house people, how you make security decisions,” said Michael Jacobson, executive director of the CUNY Institute for State and Local Governance and the city’s correction commissioner from 1995 to 1996. “All of that kind of goes to very poor training issues and a lot of this is gonna be complicated.”

Jacobson, who is also a member of the task force’s committee on Culture Change, recalled dealing with staff inefficiency and deteriorating infrastructure during his time as correction commissioner.

“The design is necessary but not sufficient to completely change the way jails operate,” he said. “You can do an incredible amount just with design, but in the end, those places have to be run with a sort of principle of human dignity.”

Jacobson made reference to the jail facilities in downtown Denver and in San Diego, places that emulate the humanizing principles indicated in the commission’s study; they enhance access to communal living spaces, lines of direct supervision and even natural light. From the outside, they hardly look like a jail.

“They’re still gonna be jails, but they don’t have to look or feel anything like those jails do,” Jacobson said. “You want to make it less stressful, less anxiety producing, safer, et cetera, et cetera. You can’t do all that with design, but you can do an incredible amount just with design.”